50%
Tweet
The Integrity NonStop BladeSystem NB54000c includes the hardware, middleware, database, and HP-UX operating environment to run a business application out of the box, says HP. 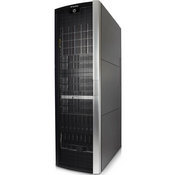 The NB54000c, like its predecessor, is a fault-tolerant server built to handle massive transaction volumes found in the financial, healthcare, and telecommunication industries. The system includes the hardware, middleware, database, and HP-UX operating environment. "It's a system that can be used to run a business application right out of the box," Bob Kossler, director of storage and planning for NonStop BladeSystems, said in an interview.

Because the same chassis is used with the NB50000c and the NB54000c, users can add the quad-core Itanium blades with dual-core blades to boost performance within the same hardware. The Integrity NonStop BladeSystems use HP's core interconnectivity technology, called ServerNet. The interconnect fabric technology provides intra-system, inter-processor communications; attachment of I/O devices; and inter-system (local and long distance) connectivity.

The 9300 series of the RISC-based Itanium was two years behind schedule when it shipped last year. In building the chip, Intel shrunk the size of its transistors to 65 nanometers from the previous generation's 90 nm, increasing the number of transistors to 2 billion to give the product a significant performance boost. Compared to the previous model, Tukwila offered up to 800% the interconnect bandwidth, up to 500% the memory bandwidth, and up to 700% the memory capacity when using DDR3 memory components.

The motherboard socket supporting Tukwila will be used in future Itanium chips, code-named Poulson and Kittson, Intel has said. Using the same socket means customers can upgrade without changing hardware, which is important because of the expense of the high-end systems that use Itanium.