50%
Tweet
The high-density PowerEdge systems pack many server nodes into a single chassis and are designed for use in public or private clouds. 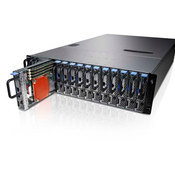 The PowerEdge C5000 line, launched Tuesday, stems from Dell's custom work in building microservers for specific customers. The company's first custom-built server was for Online.net, which is owned by Iliad Group, the second largest hosting company in France. The system, announced a couple of years ago, was based on Via x86 processors.

The new PowerEdge line comprises the C5125 and C5220, which use low-power processors from Advanced Micro Devices and Intel, respectively. Each system features between eight to 12 individual server nodes in one 3U chassis and include four DDR3 UDIMMS, two 3.5-inch or four 2.5-inch hard disk drives, two 1 Gbps Ethernet ports, and power and cooling infrastructure shared by all the server nodes.

The microserver is an emerging category of high-density system that packs lots of server nodes into a single chassis, with each node running one CPU. Overall energy consumption is reduced by all the nodes sharing the same power and cooling system. The systems are favored for use in scaled-out environments, such as public or private clouds, because of the lower energy consumption and the ability to hot-swap servers without affecting application performance.

Microservers are not built for running large database applications, but rather for handling less demanding tasks, such as video streaming or serving up content on a social network. The systems are tailored to the intended task. "What we're doing with microservers is right-sizing the server," Barton George, cloud evangelist at Dell, said in an interview.

The PowerEdge C5125 comprises one-socket server nodes that can run a dual- or quad-core Phenom II or Athlon II processor from AMD. Each node has a maximum of 16 GB of DDR3 memory and 4 TB of SATA internal storage.

The PowerEdge C5220 also has one-socket nodes, each available with a dual- or quad-core processor Xeon. A lower power dual-core Core i3-2120 is also an option. The processors have a thermal design power of either 65 watts or 95 watts. Each node includes up to 32 GB of memory and up to 4 TB SATA or 2.4 TB SAS internal storage.

Pricing depends on configuration. For example, a PowerEdge C5125 with 12 server nodes would start at roughly $13,400.

Dell's Via-based server for Online.net contained Nano CPUs with a thermal design power of less than 30 watts. The system, called the X511-VX8, held a dozen server nodes in a 2U chassis.

Dell's second custom-built microserver, codenamed Viking, was based on Intel processors and held eight or 12 single-socket nodes in a 3U chassis. Each node could hold a dual- or quad-core CPU and had up to 16 GB of memory. Dell introduced the system in September 2010.

Intel announced this month that it would release in the second half of the year Xeon E3 45-watt and 20-watt processors for microservers. The chipmaker plans to release a sub-10-watt Atom server chip next year. Intel's announcement was seen by analysts as a move against makers of ARM processors also targeted at the growing microserver market.

We welcome your comments on this topic on our social media channels, or [contact us directly] with questions about the site.
Comment  |
Email This  |
Print  |
RSS
More Insights
Webcasts
Using Artificial Intelligence, Deep Learning and Machine Learning for Cyber Defense
Don't Miss This Crash Course on Cyber Attackers
More Webcasts
White Papers
DevOps for the Database
The Cloud-First WAN For Dummies
More White Papers
Reports
Annual Global State of the WAN
Special Report: Edge Computing: An IT Platform for the New Enterprise
More Reports