50%
Tweet
The world's largest television maker is expected to announce the Internet-enabled sets at the Consumer Electronics Show in January. 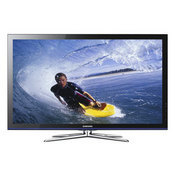 Samsung Electronics, the world's largest TV maker, told Bloomberg News this week that it is planning to join competitor Sony in using Google's software in a set of HDTVs it expects to announce in January.

There has been some speculation that the announcement will be made at the Consumer Electronics Show (CES) in January in Las Vegas.

Google TV offers the ability to search TV content from a search bar, similar to what appears on Google's website. In October, Sony became the first TV maker to launch a new line of Internet TVs powered by Google, along with a Google TV-enabled Blu-ray disc player. The partnerships are seen as a strategic move by consumer electronics manufacturers to offer products with new technologies to help them stay competitive as TVs drop in price. Sony's Google TVs range in size from 24-inch to 46-inch displays, and are priced between $600 and $1,400.

The television industry has so far snubbed Google TV, with some of the major networks widely blocking content from playing on the service.