In June 2007, I filed a Freedom of Information Act (FOIA) request to learn more about the basis for Google's complaint that Microsoft's implementation of desktop search in Windows Vista violated the terms of its 2002 antitrust consent agreement.

In September 2011, I was notified that material relevant to my request would be provided, with a $15 fee to cover copying costs. I sent the check the following month and it was cashed in November 2011. It then took more than a year of hectoring the Department of Justice and the intercession of the Office of Government Information Services to actually get the "responsive materials." The documents arrived in late March.

After six years, the truth can finally be told. What follows is an excerpt from an email sent by Kulpreet Rana, Google's director of intellectual property, to Justice Department attorney Aaron Hoag, dated Oct. 4, 2006.

Thanking Hoag for taking the time to meet the previous week, Rana wrote, "During that meeting, you raised a few questions that we wanted to follow-up on. Rather than waiting to get all of the answers, I wanted to get back to you on some of the more pressing issues...probably the most important of which is REDACTED."

This goes on for an entire page. It's a gray box of nothing.

On the next page, Rana's letter concludes, "I hope this is helpful and am happy to answer any follow-up questions you might have about the issue. ..."

The dozens of email messages provided in response to my FOIA request look just like this: Page after page of gray where text should be. Only the email addresses, the signatures and the legal and social boilerplate have been left intact.

The Justice Department's response makes a mockery of the Freedom of Information Act. I'm reminded of a line in the song Know Your Rights, by The Clash: "You have the right to free speech, as long as you're not dumb enough to actually try it."

You're free to have all the information you want, provided it's not informative. No wonder Wikileaks provoked an immune response from the U.S. At a time when consumers just won't stop sharing information and companies just won't stop collecting it, our government has all the privacy it requires to limit inquiry.

Last December, a study published by the Transactional Records Access Clearinghouse (TRAC) found that the number of lawsuits to obtain documents sought through FOIA requests increased during President Obama's first term compared to the last term of President Bush. This is particularly noteworthy because President Obama began his first term promising greater support for open government.

In January 2009, President Obama issued a memo that begins, "A democracy requires accountability, and accountability requires transparency. As Justice Louis Brandeis wrote, 'sunlight is said to be the best of disinfectants.' In our democracy, the Freedom of Information Act (FOIA), which encourages accountability through transparency, is the most prominent expression of a profound national commitment to ensuring an open Government. At the heart of that commitment is the idea that accountability is in the interest of the Government and the citizenry alike."

The Department of Justice is accountable to the public. If Google enlists a public entity to investigate whether Microsoft's search implementation in Windows Vista violated Microsoft's antitrust settlement, the public deserves to know the substance of Google's complaint and the specifics of the way the government is enforcing antitrust law.

I'm aware that there are statutory exemptions to FOIA that allow the government to withhold certain information. But when the information that is released has no substance, what's the point of releasing it at all?

Here's another email revealed by my FOIA request, from Harry Saal, a member of thetc.org, The Technical Committee, a group formed to monitor Microsoft's compliance with its antitrust settlement (and forbidden from discussing deliberations with the press). Saal's email is to Skip Stritter, another thetc.org member, with others cc'd.

That's not information. It's routing data.

The Justice Department's response to my FOIA request reads as follows: "Enclosed are 174 pages of documents responsive to your request. Sixty pages are released in their entirety. Certain portions of the remaining 114 pages reflect confidential business information; Antitrust Division attorney work product and the deliberative process of Division personnel; and information the disclosure of which could reasonably be expected to constitute an unwarranted invasion of personal privacy. ..."

The letter goes on to detail why 406 other pages of relevant documents are being withheld in their entirety. And that's to say nothing of 357 pages of printed court documents from U.S. vs. Microsoft sent to me separately, as a courtesy. So much for the paperless office.

You might think that among the 114 partial pages and 60 full pages of material, there might be something that sheds light on Google's objections to search in Windows Vista.

But you'd be wrong. The pages that the Justice Department saw fit to release include news articles from the New York Times, Reuters and other publications about Google's complaint. The entirety of the "responsive material" either has been available to anyone with an Internet connection for years or consists of names, salutations, thank yous and nothing else. Google's complaint itself, which I've sought from Google and been denied, which is mentioned in the released documents, remains a mystery.

We know the result of Microsoft's agreement with the Department of Justice, announced June 19, 2007, to resolve Google's complaint. Microsoft promised: to provide a way for users and original equipment manufacturers to select the default desktop search program in Windows Vista; to ensure that Windows launches the default desktop search program whenever Windows launches a top-level window to accept search queries; and to affirm Vista's search index will run in the background and cede computing resources to other applications (rather than running concurrently with Google Desktop Search and slowing things down). But beyond that details are sketchy. 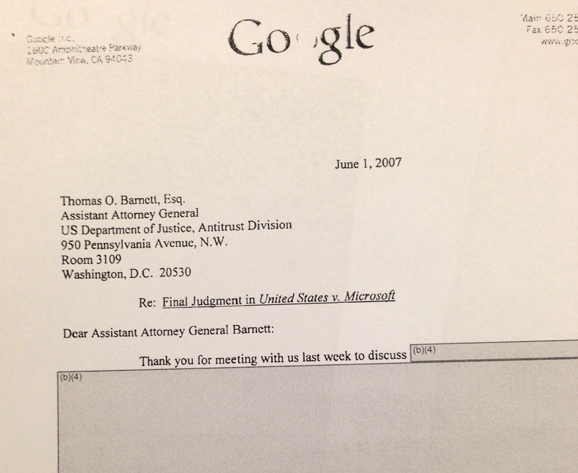 Arguably, none of this matters. Microsoft is struggling to remain relevant in the mobile era. Google's search business is doing just fine. Let it be water under the bridge.

But the dwindling relevance of Windows Vista argues for greater disclosure, not continued stonewalling. If a six-year-old technical conflict between Microsoft and Google is truly inconsequential, that's a good reason for the details to receive public scrutiny.

And this isn't just about ancient history. The application of antitrust law remains hugely important to technology companies, as can be seen from Google's recent close call with the Federal Trade Commission. One of the reasons I want to understand the substance of Google's complaint is to see how the company's arguments might apply to more current technical disputes and to determine why the Justice Department initially wanted to reject Google's complaint and then accepted it later on.

Microsoft was forced to make changes in Windows Vista to accommodate third-party search products. Companies and individuals deserve to know more about the conditions for government-mandated interoperability, given the technical and contractual ways in which Apple, Google and other companies lock competitors out or tilt the playing field.

This matters because the Freedom of Information Act is subverted when compliance is indistinguishable from non-compliance.

If the government's interpretation of FOIA is that it can release blank pages to meet with its legal obligations, journalism is diminished and pushed toward the Wikileaks model. There has to be more to public accountability than government-authorized leaks, whistleblowers who risk prosecution, and data the government fumbles into public view through incompetence. The government needs to release real information when it agrees to do so, or to refuse and face a court challenge if disclosure is deemed impermissible.