ICANN's plan to approve new domain names sought by companies spurs competition for desirable suffixes such as .app and .book.

Amazon's 7 Cloud Advantages: Hype Vs. Reality
(click image for larger view and for slideshow)
The Internet's latest land rush has begun. The Internet Corporation for Assigned Numbers and Names (ICANN) on Wednesday revealed a list of proposed new generic top-level domains (gTLDs) and the organizations paying $185,000 to have their proposals evaluated.

Many prominent companies are staking claims on new gTLDs to promote their brands or to establish a business to sell domain names within the new gTLDs. Organizations that see their proposals approved will be charged $25,000 annually as a gTLD registry and $0.25 per transaction, if there are over 50,000 transactions--this would be relevant only if the gTLD operator sold domain names within that gTLD. Companies also simply can keep approved gTLDs for their own use.

ICANN said it has received 1,930 applications, 66 of which are for geographic names, and 166 of which are in non-Latin alphabets, such as Arabic, Chinese, and Cyrillic. This is the first time that non-Latin gTLDs have been evaluated for implementation in the domain name system, an event that underscores the increasing internationalization of the Internet.

Google alone seeks recognition for over 100 new gTLDs, including .blog, .book, .cloud, .docs, .phd, and .wow. In a blog post last month, Google chief Internet evangelist Vint Cerf wrote that the gTLDs Google has applied for relate to its trademarks, its core business, the Google user experience, or domains that "have interesting and creative potential, such as .lol." 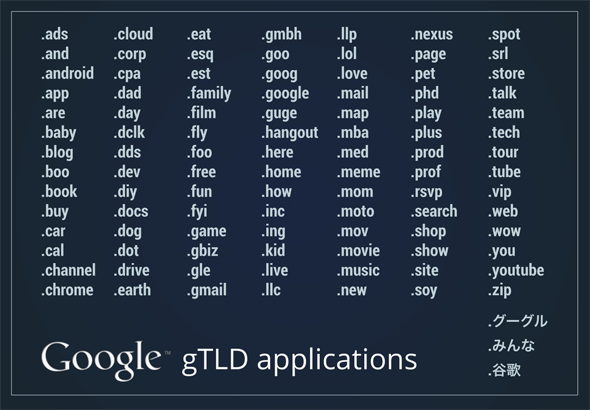 ICANN is allowing only one entity to operate the gTLD registry for a specific domain name. For the 13 parties seeking control over the proposed .app domain--a group that doesn't include Apple--and the nine companies who want the .book domain, that means either the claims will have to be self-resolved, resolved through a community process, or settled via auction.

ICANN president and CEO Rod Beckstrom said at a press event that ICANN was committed to moving forward despite criticism because ICANN believes the measures put in place to protect trademark holders are sufficient. "We think it will unleash innovation," he said, noting that domain name prices in the gTLD registries have dropped 70% in the past 12 years.

Critics of ICANN see the new gTLDs as little more than a profit-driven scheme to force companies to spend money to protect their trademarks. In a section of its website for program feedback, an individual identifying himself as Sean Conaty says that ICANN is only doing this for profit and that the plan is bad for security and usability.

New apps promise to inject social features across entire workflows, raising new problems for IT. In the new, all-digital Social Networking issue of InformationWeek, find out how companies are making social networking part of the way their employees work. Also in this issue: How to better manage your video data. (Free with registration.)

We welcome your comments on this topic on our social media channels, or [contact us directly] with questions about the site.
Comment  |
Email This  |
Print  |
RSS
More Insights
Webcasts
Strategies for Success with Digital Transformation
ROI and Beyond for the Cloud
More Webcasts
White Papers
2020 SANS Enterprise Cloud Incident Response Survey
The 2020 Duo Security Trusted Access Report
More White Papers
Reports
How Data Breaches Affect the Enterprise (2020)
How IT Security Organizations are Attacking the Cybersecurity Problem
More Reports

All I could think of when I heard about the news was how hard it will be to remember an address. And it does seem like companies are being forced to spend money to protect their brands.