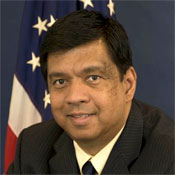 Government IT budgeting was hard enough even before government shutdowns, says this former government CIO. What can be done to combat the dynamic with Congress?

Top 10 Government IT Innovators Of 2013
(click image for larger view)
When I was the CIO for the U.S. Department of Transportation, I had the first-hand experience of working with the U.S. Congress. Most of my interactions with specific Congressional committees were very pleasant and cordial. Congressional committees were genuinely interested in understanding the problems facing federal CIOs like me and finding solutions.

However, everyone knows that Congress as a whole is dysfunctional, as is evidenced by the chain of events leading to Tuesday's government shutdown, as well as by recent Gallup Polls -- mainly because of a few partisan members.

What's less well known is how this dysfunctionality affects federal IT departments and therefore has a ripple effect on the entire U.S. economy -- and what can we do to correct it. I sure don't have all the answers but I want to get this discussion going!

But to appreciate how disruptive Congressional inaction can be, it helps to understand how arduous it is to get the path to an IT project started.

Federal IT Budget Process Is Complicated

The federal budgeting process is complex and time consuming in the best of times. If you are a government IT system owner in one of the bureaus of a large agency, seeking to fund a new system, you typically need to begin making your case at least three years in advance with bureau CIOs, CTOs, CISOs, your office head and others in leadership positions. Assuming you get a nod there, you will need to get additional approval from your bureau administrator and CFO before it reaches the central office of the secretary.

[ How could the shutdown endanger the country? Read Government Shutdown: What Are IT Systems Risks? ]

Here the request competes with other department-wide budget priorities and will typically need approval from the departmental CIO, CFO, counsel, deputy secretary and the secretary. If you clear this hurdle, and your request gets rolled up into the departmental budget, it now must survive another review by the Office of Management and Budget (OMB), where it competes with the president's priorities and submissions from other government departments.

You are one of the lucky few if your request makes it into the "President's Budget Request," which contains detailed information on policies, revenue and spending proposals with significant budgetary implications.

This Presidential budget request now moves to Congress, where the House and Senate must pass a budget resolution (budget blueprint), then conduct hearings and "mark up" the appropriations bill, followed by voting on the appropriations bills and reconciling the differences between House and Senate versions. Once this is done, the President can sign the budget into law and your new IT project is now funded!

During this entire process, your funding requests will have many twists and turns. There will be multiple requests for written justifications; there will be hearings; and you can count on the request to be trimmed and even transformed. So while you might have proposed A, B and C, you should consider yourself lucky if you get half of B and C and potentially D in exchange, which you did not ask for!

Of course, during these three years of the budget process, your requirements change, priorities change and technologies advance. And all this is for a single project. Usually there are multiple projects. The process is daunting and offers a window onto why the average tenure of major agency CIOs is only two to three years and why you continue to hear of boondoggle projects.

But Wait: CRs Are Here To Stay

If for any reason the Congress does not pass an appropriations bill or if the president fails to sign it into law, selected departments or the entire government can run out of money and the non-essential parts of government will cease to operate, as we're now witnessing.

To prevent this debacle, the Congress has the power to pass continuing resolutions -- affectionately called CRs or minibuses in Washington-speak -- that can fund the agencies until this issue is resolved. The CRs can fund existing federal programs only at current, reduced or expanded levels. Typically, expanded levels of funding are a non-starter.

Comment  |
Email This  |
Print  |
RSS
More Insights
Webcasts
People Are The Most Important Part of Autonomous SOC
Cybersecurity's Next Wave: What You Should Know
More Webcasts
White Papers
Why Add Security to Your Skill Set and How to Do It
Accelerate Threat Resolutions with DNS
More White Papers
Reports
Intelligent Outcomes Are Key to Business Resilience
The Malware Threat Landscape
More Reports

The expenses for "Obamacare" are a peanuts compared to the excessive military spending or running over a dozen spy agencies that do not talk to each other and violate the constitution on a regular basis.
Reply  |  Post Message  |  Messages List  |  Start a Board

Welcome to constitutional representative democracy, which is a messy, dirty and often highly inefficient business. While it may be great to dream that government could run like a private sector business such as Amazon, you should remember most corporations are closer to dictatorships. Is that what you truly want our government to be?
Reply  |  Post Message  |  Messages List  |  Start a Board

Come on IT is small change compared to the possible $2 TRILLION hit to our economy that Obamacare will be over just the next eight years. Shutting down the government is mere political theater. It won't last longer than around 7 to 10 days tops. Note that the stock market actually went UP after the shutdown. Can the budgeting process be made better? Doubtful, as long as members of congress use it to reinforce their own power.
Reply  |  Post Message  |  Messages List  |  Start a Board

There seems to be a misunderstanding that shutting down the government saves money. People don't realize that, even if you discount the hit to the economy, it costs hard dollars to shut down and reopen services, as Charlie says.
Reply  |  Post Message  |  Messages List  |  Start a Board

Stopping IT services to conform to a government shutdown, a difficult task. Starting IT services to recover from a government shutdown, an even more difficult task. This is a waste of skills, time and money. It halts the momentum behind development projects and risks the loss of data that falls out of synch with normal updates, People who don't understand IT are playing a game of chicken with the federal budget..
Reply  |  Post Message  |  Messages List  |  Start a Board

The big idea that needs to be embraced is getting agencies to stop building stuff,that requires big cap ex budgets, etc, and to start consuming services. That's easier said than done. If IT services move to operating budgets, they're actually at greater risk of being cut. Then you've got all the "sunk costs" in existing legacy systems, that no one wants to walk away from. A lot of these 3 year projects are more like big remodeling projects, Finally you've got a lot of employees -- and contractors -- (read "jobs") spread out across lots of Congressional home districts that are also at stake. If we can get govt. to really move to an IT services consumption model -- which is happening, by the way, as agencies move to the cloud -- that would speed up development cycles and get new technologies at work. Where to start? Unfortunately: It requires changes in Congress.
Reply  |  Post Message  |  Messages List  |  Start a Board

Thanks for this frank assessment. Three years is obviously too long to get through a budget process for one IT project. Imagine what Jeff Bezos would do with this process. How much would he shorten it? Amazon is hiring 70,000 seasonal employees now and will hire a percentage of them fulltime after the season. Could government learn from that model?
Reply  |  Post Message  |  Messages List  |  Start a Board

Fixing partisan gridlock seems unlikely, near term. Isn't there some way to make the budgeting process itself less rigid? It sounds like part of the problem is that priorities and technology choices that tend to drift out of date are specified in the budget documents themselves. Or am I misunderstanding?
Reply  |  Post Message  |  Messages List  |  Start a Board
Editors' Choice
Hot Topics

11 Ways DevOps Is Evolving Lisa Morgan, Freelance Writer,  2/18/2021
White Papers
Why Add Security to Your Skill Set and How to Do It
Supercharge Incident Response with DDI Visibility
MontanaPBS Shifts to Agile Broadcasting with Help from Raritan KVM Solutions
Understanding Credential Abuse Attacks: A Real-World Example
Don't Let the Past Obstruct Your Zero-Trust Future