Unified Communications are becoming services within other applications. Does that mean that they're taking over the world of apps, or disappearing into a sea of services?

8 Steps For Creating An Agile Enterprise
(Click image for larger view and slideshow.)

How many of us are making use of unified communications (UC) services without even realizing it?

Unified communications (voice, video, text, and workplace collaboration combined in a single service) provides a set of functions that enterprise users need. According to market research firm Grand View Research, the global market for unified communications is predicted to reach $75.81 billion by 2020. The question for vendors in the market, and organizations looking to deploy UC, is whether those communications functions will be accessed via dedicated client applications, or as part of the other applications that make up the bulk of their business environments.

At Enterprise Connect 2016 in Orlando last week, most of the conversation was around whether UC is a class of software that will soon be subsumed into other applications, or something that ls poised to take over the enterprise.

The answer all depends on how you look at the major trends in UC.

Presenters and attendees talked about the ways in which different generations (read: Millennials) expect their workplace applications to function. A year ago, there was still significant support for the UC "apps" model. That's a deployment model in which every function is its own separate micro-application.

Proponents of this model pointed to people who happily have 73 different messaging apps on their smartphones, with different services used to communicate in different ways with separate groups of people.

This year, the model moved to one in which people don't want to pause their work in order to communicate. The communications aren't found in separate apps for each function. They're not even found in separate apps at all. They're built into the productivity and enterprise applications themselves. Google is one of the largest proponents of this model, which it demonstrated in the way communications work within Google Apps for Work.

You can watch the entire presentation below:

Meyers said that the primary motivations for the move were mobility and simplicity. "The old notion is that people are stuck in an office all day," he said. "We have the philosophy that cloud and mobile trump static and desktop." He decided that putting data in the cloud and adopting a set of applications in which someone simply clicks on an icon within Docs to communicate, rather than leaving the document to invoke a separate communication application, made the most sense.

When users were able to work on both laptop computers and smartphones using the same documents and the same interface, it made the decision even easier for Meyers. "We changed out 3,000 access points, and got rid of all the Ethernet ports in the offices. We decided not to be tethered to offices," he said. 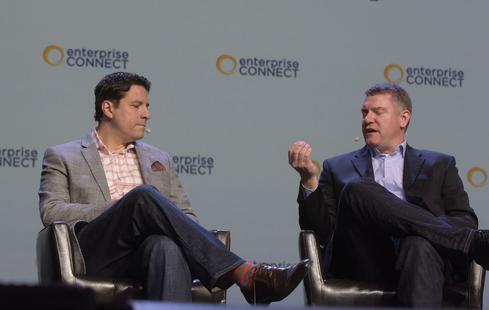 Asked about expected and unexpected consequences of the change, Meyers said that complaints from individuals who had become "power users" of the existing technology was expected. On the unexpected side, Meyers pointed to "the degree to which people adopted hangouts. Also, how much creativity showed up."

He said that hangouts -- accessed from an icon within documents -- had become a common way of communicating among teams and individuals. That kind of acceptance had many people at the conference talking about a UC future that looks very different from today's market.

Communication within applications -- communications-as-a-service -- was a trend heard often around the expo floor at Enterprise Connect. There are several reasons why executives talked about making the move to CaaS. The first, as mentioned earlier, is the expectations of a new generation of employees. The second is saving money.

Meyers said that making the shift from traditional communications to UC within Google for Work made economic sense. "We looked at our Centrex logs, and more than 15% of the phones were used less than 10 times per month. Many of the conference calls were three people or less," he said. "Moving to the Google Voice system let us save a lot of money."

The final factor in Motorola's shift to Google for Work was the time it took to transition the work force. Meyers said the entire 22,000-plus company moved to Google for Work in one day. He said that much of the speed was due to "More than 2,400 'Google Guides,' who wore orange t-shirts and tied orange balloons to their cubicles. They told everyone that their day job was Google for that day."

One of the additional benefits of moving to UC within applications, Meyers said, was given voice by a longtime Motorola employee who approached Meyers in the company cafeteria. The employee told Meyers that he had been opposed to the move, but had never seen the company so unified.

There are plenty of unified communications applications that still exist as standalone products, along with dedicated terminals and telephony instruments to take advantage of those applications.

But the combination of cost savings, increased collaboration, and generational shift had a lot of attendees at Enterprise Connect talking about a future in which UC isn't a separate application. Rather, it's simply the way users connect with one another directly through the applications in which they spend their working days.

Curtis Franklin Jr. is Senior Editor at Dark Reading. In this role he focuses on product and technology coverage for the publication. In addition he works on audio and video programming for Dark Reading and contributes to activities at Interop ITX, Black Hat, INsecurity, and ... View Full Bio
We welcome your comments on this topic on our social media channels, or [contact us directly] with questions about the site.
Comment  |
Email This  |
Print  |
RSS
More Insights
Webcasts
Key technology trends in 2021 - Making these technologies work for your business
Hybrid Cloud: The Great Balancing Act
More Webcasts
White Papers
Why Add Security to Your Skill Set and How to Do It
How Hyatt Eliminated Bot Attacks Without Impacting their User Experience
More White Papers
Reports
Assessing Cybersecurity Risk in Todays Enterprises
How Data Breaches Affect the Enterprise (2020)
More Reports
Copyright © 2021 UBM Electronics, A UBM company, All rights reserved. Privacy Policy | Terms of Service