The latest Steve Jobs film hits most theaters this weekend. What did the movie get right, and what did it get wildly wrong? 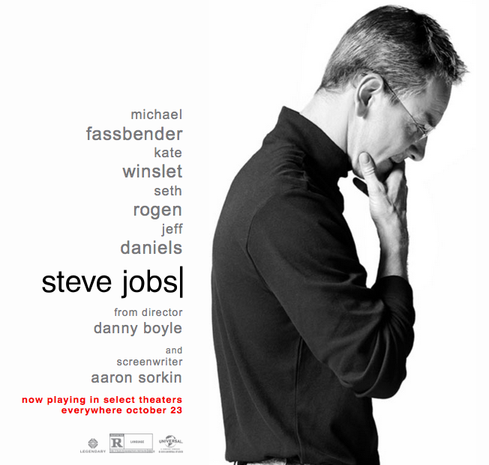 
Steve Jobs, the latest film about Apple's late co-founder, will be fully released this on Oct. 16. As with all movies about Jobs's life and work, this piece has come under scrutiny as critics question the accuracy of its events.

Sorkin's adaptation takes a slightly different approach from other movies focused on Steve Jobs In an email to producer Scott Rudin, Sorkin wrote out the following plan for his film, as described in an interview with Wired:

"If I had no one to answer to, I would write this entire movie in three real-time scenes, and each one would take place before a particular product launch. I would identify five or six conflicts in Steve's life and have those conflicts play themselves out in these scenes backstage – in places where they didn't take place."

After getting the go-ahead from Sony, Sorkin chose to write the film around three iconic product launches: the Macintosh in 1984, NeXt in 1988 and the iMac in 1998. He focuses on an earlier Jobs building the future of personal computing, long before the iPhone was even a thought.

Sorkin admits there were generous creative liberties taken while writing and arranging the film's events. As Apple co-founder Steve Wozniak said in an interview with Bloomberg TV, the movie "isn't about reality. It's about personalities."

In order to depict Jobs's behind-the-scenes behavior and capture the essence of the Apple icon, Sorkin spent time with Wozniak, Hoffman, former Apple CEO John Sculley, and Jobs's daughter, Lisa. The goal is to portray Jobs and his relationships, not his life story.

Upon viewing, Wozniak described the film as "unbelievable" but also admitted much of the film was not factually accurate. Here we separate fact from fiction in Steve Jobs – what's real and what's fabricated?

Have you seen the movie or plan to make a trip this weekend? Why or why not? Share your thoughts in the comments.

I find it annoying when movie makers use the name of a person to describe a psuedo moment of time in which so much in not factually correct. I understand you need to make some creative liscencing to get the feel of the people and events, cutting out minor characters becasue real life is so much messier than a movie can contain. The more I read about the movie the less I'm likely to go see it. If it doesn't really tell me about Steve Jobs, If it doesn't tell me how Apple got built, If it's  just about a tempermental man that had a bunch of fictional arguments, why would I want to see that. They should have left Steve Job's name out of the title and just called it "launch" for something to differentiate it from a biography.
Reply  |  Post Message  |  Messages List  |  Start a Board

I didn't see Moneyball, but I did see The Social Network. Sorkin has an interesting perspective, and his association with those two movies may also draw people in to see the Jobs movie.

Many of the events in Steve Jobs are made up, unfortunately for those who go into the movie expecting a lot of legitimate information. While there are some nuggets of truth in there, it looks like the fiction outweighs the facts.
Reply  |  Post Message  |  Messages List  |  Start a Board

The economics of entertainment is changing. Viewers have started searching for facts in science fiction movies such as, Interstellar, etc. The Steve Jobs movie might hold information value. However, without having watched the movie I can say that there is a bias and expectation that the movie will hold some informational value because, Moneyball was great.
Reply  |  Post Message  |  Messages List  |  Start a Board

Think you hit the nail on the head here. They could've made up a movie about someone else, but it wouldn't gotten a fraction of the attention Steve Jobs did, or made as much money off it. If the film is about Steve Jobs, people will talk about it and pay to see it, especially if the people behind it are already connected to a popular movie (in this case, The Social Network).
Reply  |  Post Message  |  Messages List  |  Start a Board

Exploit the sittuation/name so they can spend little $. The movie gets free advertise from the media anyway. Production cost next to nothing(unknown actor). Anyway, it'll make $ for sure.

They do make those movies like you suggested. But those cost them heavy $ (production, advertisement, etc). And there is no guarantee they will make profit.

But then why not just make a completely fictional movie that's not tied to a real person?
Reply  |  Post Message  |  Messages List  |  Start a Board

The purpose of making a movie is to make money. (Unless somebody pays the movie maker, then it's not about money.) If it's entertainment, it'll make money.

If at the beggining, the screen shows it's for entertainment purpose only. Why don't we just enjoy it for that. Why everything has to be correct?

@hho927, While I don't entirely disagree with that point, I think there's a point where poetic license ends and outright making things up begins.  I would argue that anytime a movie is about a person, then the events depicted in the story need to be true.  Otherwise, you're just fabricating a non-existant person's life.  Am I wrong?
Reply  |  Post Message  |  Messages List  |  Start a Board

Not everything suppose to be true unless it's a documentary.
Reply  |  Post Message  |  Messages List  |  Start a Board

That's something I thought of -- sure, Boyle and Sorkin admitted the movie isn't factually sound, but is that something most viewers will recognize or remember? Or will they leave theatres thinking this is an accurate portrayal of how things unfolded in Jobs' life?
Reply  |  Post Message  |  Messages List  |  Start a Board
Page 1 / 2   >   >>
Editors' Choice
Hot Topics