Is your Salesforce.com app mix keeping up with your company's business growth? One rapidly growing midsize company shares a look at its blend of turnkey and custom apps. 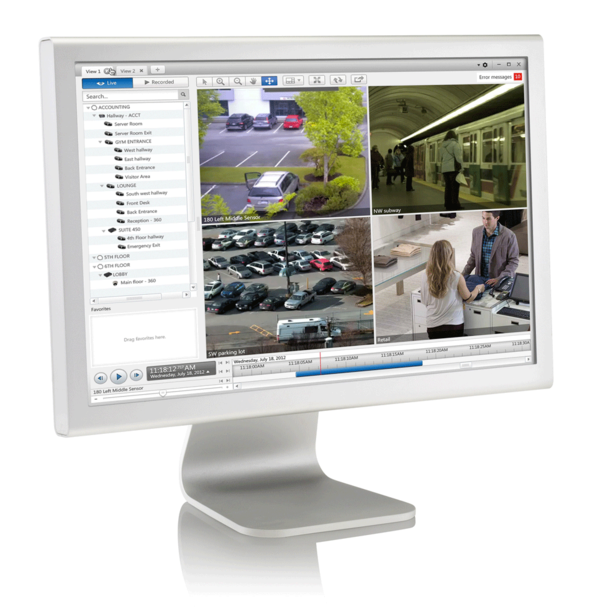 In many respects, Avigilon is an ideal customer for Salesforce.com and other cloud platforms. The firm, which makes high-definition surveillance technology, has more than 200 global employees and it is growing. Its more than 17,000 customers are spread across 80 countries. The company posted revenue of more than $67 million through the first three quarters of 2012, a 64% increase from the same period in 2011. By most indicators, Avigilon's arrow is pointed straight up. Which means that what the business needs today, it may not need tomorrow or next year.

"With this sort of hyper-growth we've experienced since we went to market, we really needed a platform like Salesforce to allow us to be flexible and allow us to design business processes extremely quickly, and [to] be nimble and lean in how we operate," said Amir Javidan, Avigilon's VP of customer service and IT.

While the core Salesforce CRM application is important to Avigilon, much of that flexibility comes in the form of customized and ready-made apps and integrations via Force.com and AppExchange. The ability to add or tweak as Avigilon's needs change -- which happens regularly -- is key.

Javidan's dual role overseeing customer service and IT means he is focused on ensuring that technology is effectively meeting the needs of the user that matters most: the paying customer. When Avigilon hit the point where it needed true call-center operations, for example, it again turned to the cloud, adding InContact's CTI integration with Salesforce. Doing so, Javidan said, allowed the support team to quickly deploy a more personal, white-glove level of service.

"Our agents can pick up the phone and say 'Hey Bob, it's been a while since we've heard from you, what can I help you with today?'" Javidan said. "That first five seconds of the call, where we can really personalize things right off the bat, just completely changes the tone of the conversation and makes sure things get off on a positive start."

Choosing the right apps -- whether as-is from the AppExchange or tailored for Avigilon's particular needs via Force.com -- isn't a matter of picking bells and whistles. Rather, Javidan said the firm identifies particular business problems and then looks at the technologies available for solving them. While Javidan and his team certainly consider options outside of the Salesforce ecosystem, the latter has a distinct advantage in the selection process, one likely to keep Marc Benioff smiling. Oftentimes, another Salesforce customer has already addressed the same challenges.

"You have this network of other businesses that have already solved a lot of these same problems," Javidan said. "You can leverage that and not have to worry about reinventing the wheel or dealing with a completely third-party product that you then have to integrate with Salesforce."

That network also helps Javidan steer clear of apps that might not be a good fit for Avigilon's use cases. It's not unlike how consumers turn to online reviews when considering products or services. "You can see what challenges people have had with a particular app," he said. Javidan also noted the ease with which he can test apps in a sandbox environment without any risk to his production environment. That helps to identify potential problems and also make an informed, first-hand choice between competitive apps. For example: "I've got these three apps that do similar things and I want to figure out which is the best one. Just pop them into your sandbox and within 15 minutes you can be evaluating these applications and seeing which one's really the right fit for your business," Javidan said.

For Javidan, the ability to customize and custom-build on the Force.com platform is the clincher. As a result, the AppExchange doesn't necessarily need to offer the perfect solution to every business problem. Javidan can tweak to Avigilon's particular specifications.

Of course, not all apps are created equal. Sometimes they don't match expectations or, in Avigilon's case, the company's needs outgrow the functionality. In that scenario, though, it's easy to move on. "We've definitely had applications that we used and then at some point we decided our business needs have changed and it's not quite the right app [anymore]," Javidan said. For example, Avigilon recently replaced the data-cleaning app it uses to keep its digital house in order; it had simply outgrown the original one. "It's really straightforward to say, OK, we're going to slot in this other app in place of this one."

Read on to see eight ways Avigilon uses apps to get more out of its Salesforce deployment.


Great list! However, have you heard about Klink? I've been having some issues finding a decent caller ID solution for Salesforce up until recently, and I figured I'd share some of my experience with anyone who might have run into a similar issue. Klink (www.klink.com) is pretty handy, especially for mobile professionals.

It's super functional and includes social media data for anyone who calls you. Plus it's got the ability to identify millions of callers who aren't in your address book or in your Salesforce database. It also has an "update Salesforce" feature, which is pretty helpful especially if you're away from your desk a lot of the time. It's worked really well for me so far – I hope this is helpful for anyone else with a similar need!
Reply  |  Post Message  |  Messages List  |  Start a Board

Good eye. They are using Conga as well, though Javidan said in a follow-up email that it was an integrated piece of their Echosign installation rather than a separate app. Echosign uses Conga to import Salesforce data into contracts.

s outgrow the functionality. In that scenario, though, it's easy to move on. "We've definitely had applicatio
Reply  |  Post Message  |  Messages List  |  Start a Board

Great article, Always good to hear what others are using to keep their businesses effective. One item related to slide/page 5 is that you reference Echosign but are showing the Conga Composer App which has direct integration with Echosign (and other eSig apps). So they must be generating the document with Conga Composer and then distributing the document through Echosign for eSignature. May seem like a minor detail but the ability to create just about any document (Word docs, Excel spreadsheets, PDF Forms, PPT presentations and even HTML email) using Salesforce data with Composer is pretty powerful and a must have for many companies. Worth checking out further. Loved the article!
Reply  |  Post Message  |  Messages List  |  Start a Board
Editors' Choice
Hot Topics