The N900 is rumored to be the first handset to get the operating system developed by Intel and the Finnish phone maker. 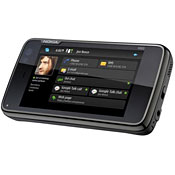 Nokia N900
(click image for larger view and for slideshow)
Nokia, which is losing market share in the high-end of the smartphone market to Apple and other vendors, is hinting its MeeGo operating system for such devices could appear on the N900 as early as mid-November.

Nokia is developing MeeGo with partner Intel. The OS is a crucial piece of Nokia's strategy to take back share in the high-end of the smartphone market from competitors, which include the Apple iPhone and phones based on Google's Android operating system. In a blog post for developers Wednesday, Harri Hakulinen, project leader for bringing MeeGo to the N900, said his team was in the last phase of developing MeeGo 1.1, which is expected to give developers, particularly application builders, a "relatively stable ground" for starting their work. At the same time, Nokia is working on the MeeGo 1.2 release. While not saying when MeeGo would be available on the N900, Hakulinen hinted that something important is planned for MeeGo's first developer conference.

"Keep in mind the MeeGo conference in Dublin in mid-November," Hakulinen said. "As you can see from the title of my talk, I am expecting a bright future for MeeGo on N900!" The title of the blog is "MeeGo calling -- on N900."

Nokia has said that MeeGo would be available on one of its smartphones before the end of the year. The OS is a combination of Nokia's Maemo and Intel's Moblin operating systems, both variants of Linux. The N900, introduced in the summer of 2009, currently runs the latest version of Maemo.

Analysts have said that MeeGo has the potential of becoming a strong competitor to Apple's iOS and Android, if Nokia creates an interface and embedded services that give consumers a reason not to choose rivals' offerings.

In the meantime, when only Nokia's Symbian OS is taken into account, the handset maker's global share of the overall smartphone market, from low end to high end, is expected to fall from 46.9% last year to 30.2% in 2014, according to Gartner. However, Nokia, the world's largest mobile phone maker, is hoping to do much better with the introduction of MeeGo.

Android, Nokia's biggest competitor in all segments of the smartphone market, is expected to see its share soar from 3.9% to 29.6% in 2014. Apple, which is expected to remain focused only on the high-end of the market, will rise from 14.4% to 14.9%, Gartner says.