The 10-megapixel CoolPix P7000 has a 7.1X optical zoom and includes a host of shooting functions that boost performance near the more advanced digital SRL cameras used by professionals and photo enthusiasts. 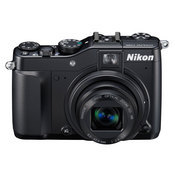 (click image for larger view)
Nikon CoolPix P7000
Nikon has refreshed its flagship CoolPix camera, adding the company's latest image-processing engine to the lightweight point-and-shoot model. The CoolPix P7000, which replaces the P6000 released in September 2008, is a 10-megapixel camera with a 7.1X optical zoom. The camera is built with enough shooting functions to take it close to the more advanced digital SRL cameras used by professionals and photo enthusiasts.

New features in the P7000 include Nikon's latest image-processing engine, called the Expeed C2. The technology delivers faster image processing and richer tones in high-resolution images than the P6000. The P7000 is also equipped with several new functions, including zoom memory and a tone level information display that provides greater control over shooting. The zoom memory function allows the user to specify a preset focal length for faster switching from a wide-angle position.

The latest flagship CoolPix also has a 1/1.7-inch CCD image sensor behind the zoom lens for a broader range of shooting options. The camera is the first CoolPix to have a built-in neutral density filter, which enables the user to apply slower shutter speeds when shooting in bright surroundings. In addition, the P7000 has more options that its predecessor for better shots in low-light conditions. Finally, the camera can take record high-definition video at a resolution of 720p at 24 frames per second. The P7000 is scheduled to ship in late September at a price of $500.

Nikon on Wednesday also introduced two other CoolPix cameras, the S8100 and S80.

The S8100, which replaces the S8000, is a pocket camera with a 10X zoom lens and a better CMOS image sensor for nighttime shooting. The 12-megapixel camera has a 3-inch LCD display and is capable of recording 1080p high definition video. Other features include motion detection technology that automatically adjusts shutter speed and ISO sensitivity to compensate for camera shake and subject movement. The S8100 is scheduled to ship in late September at a price of $300. Available colors include black, red and gold.

The S80, which replaces the S70, is equipped with a 3.5-inch OLED touch screen that offers more vivid images and faster operational response than its predecessor. The 14-megapixel camera is about a half-inch thick and has a 5X zoom lens. Nikon has added a new user interface that simplifies operation of the point-and-shoot camera for the novice photographer. The camera also takes 1280-x-720-pixel video and is equipped with an HDMI mini connector for playback on an HDTV. The S80 is scheduled to ship in the fall at a price of $330. The camera will be available in black, blue, gold, pink, red and silver/brown.

Nikon last refreshed CoolPix cameras in mid-August, when it introduced a new version of its projector camera, the CoolPix S1100pj. Nikon added features applicable to business users as much as consumers.

We welcome your comments on this topic on our social media channels, or [contact us directly] with questions about the site.
Comment  |
Email This  |
Print  |
RSS
More Insights
Webcasts
Data Protection Strategies and Secrets - 12/10 @ 11am EST
Defense and Response Against Insider Threats & User Errors
More Webcasts
White Papers
Why Chatbots Are So Popular Right Now
Fact-Check Your Ransomware Assumptions
More White Papers
Reports
Evolution of Ransomware Gangs
How Data Breaches Affect the Enterprise (2020)
More Reports