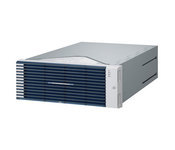 NEC Express5800/ft Server
NEC Corporation of America announced Monday that it is adding to its NEC Express5800/ft series servers support for Microsoft's Hyper-V on its fault-tolerant hardware platform. This represents the latest additions to the company's Fault Tolerant (FT) server line.

Mike Mitsch, general manager of the IT platform group at NEC America, said, "Offering Hyper-V or other virtualization on high-availability environments has proven challenging and complex. The fault-tolerant hardware has to be aware of, and support, the hypervisor. Being able to run Hyper-V on fault-tolerant hardware addresses the needs of mission-critical applications."

NEC's Express5800/ft series provides redundancy for essential hardware components including CPU and memory to avoid system downtime due to hardware failures. "As you use virtualization, hardware failures become more significant," stated Mitsch. The components that typically fail on servers, according to Mitsch, are the moving parts -- fans, disk drives, and the high-heat areas like power supplies -- followed by memory, which can especially be a problem in virtualized environments, which are memory-intensive.

"Hardware fault tolerance is the most cost-effective solution for x86 platforms to ensure high availability when factoring in the time spent recovering from corruption due to failed non-fault tolerant server hardware such as those commonly used with Hyper-V and VMware's HA," said Eric K. Miller, CEO of Genesis Hosting Solutions, which has been offering VMware-based services on NEC fault-tolerant hardware and has been evaluating Microsoft's Hyper-V on NEC's platform.