NASA's car-like Curiosity rover beams back views from the Red Planet, revealing the most detailed depiction of Mars surface to date. 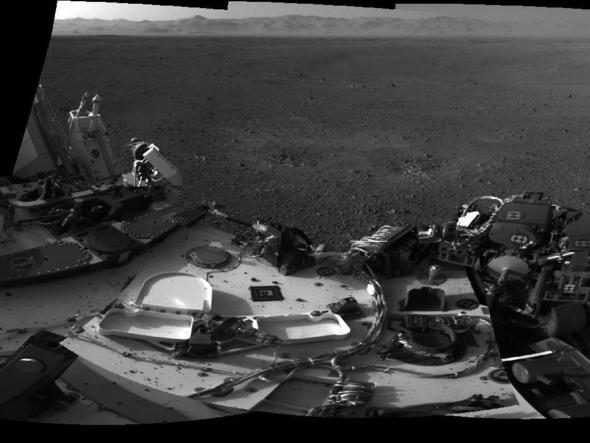 Just days into its mission, NASA's Curiosity rover has begun sending back dozens of snapshots of its surroundings on Mars. The pictures range from low-resolution, black-and-white images to full color, 360-degree panoramas.

Curiosity is equipped with 17 cameras, including a mast camera (Mastcam), navigation cameras (Navcams), and hazard-avoidance cameras (Hazcams). Two hours after landing on Mars on Aug. 6, it sent back its first grainy images, taken with its front and rear Hazcams.

The rover is performing "very well" and has already transmitted a "plethora" of images and other data, NASA said in an Aug. 9 update. The flight team plans a software upgrade to optimize Curiosity for surface operations.

In a series of system checks during its first week, Curiosity's Mastcam showed that it can swivel 360 degrees, while its specialized equipment--including the Alpha Particle X-ray Spectrometer, Chemistry and Mineralogy Analyzer, Sample Analysis at Mars, and Dynamic Albedo Neutrons instruments--all checked out.

NASA scientists have begun creating a 150-square-mile geological map within the Gale Crater where Curiosity landed. They have divided the area being mapped into 151 quadrangles of one square mile each. Curiosity landed at the foot of Mt. Sharp, which is three miles tall and 96 miles across and located inside the Gale Crater. "We want to choose a route to Mt. Sharp that makes good progress toward the destination while allowing important science observations along the way," said Dawn Sumner of the University of California, Davis, and a member of the Curiosity science team.

Curiosity is exploring Gale Crater, and documenting what it "sees" in images of remarkable detail. Some Navcam images have been stitched together to create panoramic images, while others reveal Martian pebbles, one centimeter in size, that settled on the rover's deck. The images "show us that the rocket engines on our descent stage kicked up some material from the surface of Mars," said Mike Watkins, Curiosity mission manager, in NASA's Aug. 9 update. He said the rocks present no immediate problems for mission operations.

Images of Gale Crater include a 360-degree view that reveals Mars' different shades and textures, and a full-res panorama of Curiosity itself.

Curiosity also carries 10 science instruments, including tools for gathering rocks and soil samples, processing them, and distributing them to test chambers onboard. The main mission of the rover, which is part of NASA's Mars Science Laboratory, is to assess the habitability of the planet.