Mozilla aspires to turn Web technology into an open mobile platform that offers an alternative to proprietary platforms offered by Apple and Google.

Mozilla wants to save the Web, again. The first time was in 2004, when the community-driven organization brought competition back to the browser market with the release of its Firefox Web browser. It was a time when Microsoft Internet Explorer accounted for about 95% of browser usage worldwide. 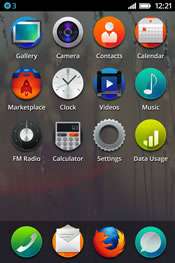 Icons in Firefox OS are circles, not squares.
Today, Internet Explorer accounts for less than a third of global browser usage, by StatCounter's measure, and though the rise of Google Chrome has reduced Firefox's global usage from its high-water mark of over 30% three years ago to around 22% today, Mozilla's mission--to promote openness and innovation on the Web--was accomplished.

Through Firefox and other projects, Mozilla revived browser competition and, by virtue of its market share, assured that the open Web community had a voice in the ongoing development of Web standards.

But saving the Web, like saving the world, just isn't a one-time job. It's a chronic crusade. And this time around, re-saving the Web may just save Mozilla.

In Pixar's The Incredibles, superhero Mr. Incredible at one point laments the impermanence of salvation. "No matter how many times you save the world, it always manages to get back in jeopardy again," he declares. "Sometimes I just want it to stay saved! You know, for a little bit? I feel like the maid--I just cleaned up this mess! Can we keep it clean for ... for 10 minutes!"

Or 10 years. Less than decade after its first act of selfless heroism--the launch of the free, open source Firefox browser, which saved the browser market from Microsoft domination--Mozilla is reprising its role as the people's defender.

This time, it's the mobile Web that's threatened, not by Microsoft but by Apple and Google, the leading smartphone platforms. With their native apps, locked-down platforms, proprietary software stores, and capricious developer rules, Apple and Google are making Web technology less relevant. At least that's how Mozilla's leaders see it.

To save the Web, Mozilla must leave its comfort zone in desktop computing, and shift to where the action is, mobile Web technology. That's why it's developing Firefox OS, a browser-based operating system for mobile devices. The first Firefox OS phones are expected to be released in early 2013 in Latin America, through a partnership with Spanish mobile carrier Telefonica.

During a media event last week at Mozilla's office in San Francisco, CEO Gary Kovacs explained the reason Mozilla is pushing ahead with Firefox OS. "It really gets back to the overriding mission that Mozilla believes in, which is an open Web available for everybody." Mozilla, through Firefox, helped ensure that "anybody could connect [on the Web], without anybody gatekeeping," said Kovacs. "[T]he reason we're going into mobile is really just an extension of that belief."

There are some 2.5 billion people online, said Kovacs, and the next 2.5 billion are coming from the developing world. "In order to enable them to connect, we have to break down the proprietary barriers that are now creating silos in mobile," he said. "Today, they'd have to choose, if they had the money to choose, between one of two worlds. Neither one of them represents the open Web."

What makes the open Web important, said Kovacs, is you can publish and innovate without having to ask somebody's permission.

The problem with asking permission is that it's not always granted. At the end of August, for example, Wired reported that Apple had refused to approve an app that mapped the airstrikes of American drones. The publicly available data presented through the app is not unlawful; Apple simply deemed the app's presentation of the data to be "objectionable."

Google is not as egregious a villain as Apple when it comes to divergence from Mozilla's definition of openness. It's not just the fact that Google has paid hundreds of millions to Mozilla in exchange for being the default search provider in Firefox. Google really is more open in many ways.

But Google's version of open is more closed than Mozilla would prefer. Android comes with fewer strings attached than iOS, but it still has strings. Companies like Amazon have chosen to build on Android without Google's involvement, but they generally have their own sets of requirements that limit what users can do. Firefox OS aspires to be more open still.

On the ground, the situation is not comic book black-and-white. Engineers at Apple, Google, and Mozilla regularly interact with each other, and with representatives from other companies like Microsoft, to hammer out Web standards on a friendly basis. But there is a real difference between what Mozilla is trying to do and the empires built by Apple and Google.