ZTE, the Chinese handset maker, rolled out the Axon phone this week, which it thinks will be its ticket into the US market.

It might surprise you to learn that ZTE is the second-biggest seller of phones and the third most popular maker of Android handsets in the US. The company believes its new flagship smartphone, the Axon, will help it solidify its position with American phone buyers.

ZTE pulled out all the stops with the Axon, which is a premiere device boasting best-in-class specs and an attractive design that ZTE calls "urban prestige." ZTE chose to clothe the Axon in metal, which comes in blue, silver, and gold. The handset is thin, light, and bursting with technology.

The screen measures 5.5-inches and has 2560 by 1440 pixels, making for quad HD resolution. It is protected by Gorilla Glass 3. The Axon is powered by Qualcomm's top-of-the-line Snapdragon 810 processor, with eight cores running at 2.0 GHz each, and is paired with an Adreno 450 GPU for pushing polygons. The phone has 4GB of RAM and 32GB of storage. ZTE crammed a 3,000mAh battery into the Axon, which charges swiftly thanks to Qualcomm's QuickCharge technology.

ZTE took a page from HTC with the camera. The main sensor captures 13-megapixels. It is joined by a secondary 2-megapixel sensor to help improve focus and exposure and collect depth-of-field information for creating 3D effects. The lens has an aperture of f/1.8, which matches the light-gathering capabilities of the Samsung Galaxy S6. The user-facing camera has an 88-degree-wide viewing angle so people can put more people in their selfies. The Axon can capture 4K video for the 4K TV you probably don't have yet. 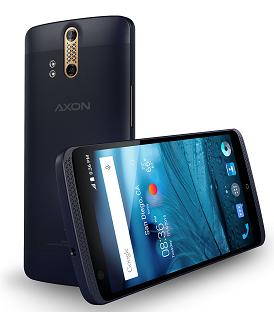 ZTE claims 80% of smartphone buyers are interested in high-quality sound. That's why ZTE gave the Axon two sound-processing chips. The company says music playback is dramatically improved by a pair of analog-to-digital and digital-to-analog converters. The phone has two microphones, which can capture stereo sound and eliminate background noise at the same time for clear audio.

The phone supports a wide variety of wireless radios, including Bluetooth, GPS, WiFi, NFC, and LTE. The handset runs on GSM-based networks and is sold unlocked. That means it will work seamlessly with the networks operated by AT&T and T-Mobile, but not ones operated by Sprint or Verizon Wireless.

ZTE made the phone available for preorder. It costs $449. Customers who preorder the phone early will be gifted with a pair of JBL headphones. It starts to ship July 27, and will also be available from Amazon.com and Newegg.com.

[Read how Samsung is rushing its new Galaxy Note to market.]

Can the Axon make an impact? It won't be easy.

The price point isn't a problem. The Axon easily matches Samsung and LG handsets when it comes to specs and is priced at $200 less. ZTE's success so far hinges on distribution deals with prepaid carriers such as Cricket Wireless and MetroPCS. These and others sell ZTE's low-cost handsets in retail stores. Without a significant marketing push, few will stumble upon the handset on ZTE's US website.

Those who do consider the ZTE Axon can rest easy thanks to a new warranty program ZTE has planned. It is promising two years of breakage repairs for the handset, a 30-day buyer's remorse return window, and support from the likes of AT&T and T-Mobile.

The ZTE's formula can work.

"Can the Axon make an impact? It won't be easy. The price point isn't a problem. The Axon easily matches Samsung and LG handsets when it comes to specs and is priced at $200 less. ZTE's success so far hinges on distribution deals with prepaid carriers such as Cricket Wireless and MetroPCS."

Eric, that's an important question; can Axon make an impact? In my opinion it can hit the middle segment peoples who are not bothered about brands. With a smarter price they are getting an at par high end device like Samsung/Apple/LG etc in terms of features. Am not sure about its quality.
Reply  |  Post Message  |  Messages List  |  Start a Board
Editors' Choice
Hot Topics