Yes, there might be fecal matter on your phone. Soon you'll run your fingers all over the screen and then use them to eat a burger. See where we're going? Good thing there's PhoneSoap to sanitize your smart phone.

Your mobile phone is dirty, and PhoneSoap invented something to clean it.

Researchers in the UK found E.coli--a bacterium commonly found in fecal matter--on 16% of mobile phones, and other harmful bacterium on 82% of the tested phones. It's not hard to understand why. A study by American interactive marketing firm 11mark found that 75% of people use their phones in the restroom. When the four guys at PhoneSoap heard about all the contaminated phones, they decided to do something about it.

PhoneSoap is a phone sanitizer that uses Ultraviolet-C lights to clean your phone. It also charges it, and amplifies the speaker so it can be heard through the PhoneSoap box--just in case you want to set an alarm for the morning.

The company raised $63,478 on Kickstarter, much more than the $18,000 asked for. "We wanted to demonstrate market traction," co-founder Wesley LaPorte said. "We didn't have any money, we just had an idea and a prototype."

According to the company, the prototype works like this. Plug in PhoneSoap to a wall socket, plug in a mobile device to PhoneSoap, and close the box. In three to five minutes the phone is clean, and if you leave the phone inside, it will continue to charge. 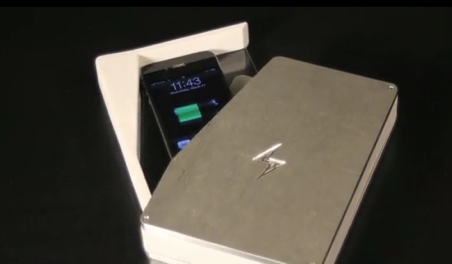 LaPorte said the UV-C lights are completely safe for people. "Not only are they contained in a box, but they also use very short bursts of light."

LaPorte had the idea to use UV-C light because it's a fast, effective sanitizing method that doesn't use liquid or heat. UV-C light is a common sanitizer in labs and hospitals. It penetrates bacteria cell walls and disrupts its DNA so it can't reproduce. That kills the bacteria.

The company claims it's 99.9% effective at killing bacteria. In extremely rare cases the bacterium's DNA can repair itself after being damaged by the UV-C light.

The bulbs last about 4,000 hours and LaPorte said, "You'll never have to replace them."

PhoneSoap connects to a phone one of two ways: via a micro-USB cable, or via an Apple 30-pin USB adaptor that fits onto the end of the micro-USB cable. PhoneSoap plugs into any two-pronged wall outlet or USB power source. Compatible phones must measure smaller than 1.2 inches thick, 4.1 inches wide, and 6.1 inches tall.

PhoneSoap retails for $40, and is currently sold out. LaPorte said the company would announce the next production run in a couple of weeks via an email list. The company plans to produce a tablet version next year.

We welcome your comments on this topic on our social media channels, or [contact us directly] with questions about the site.
Comment  |
Email This  |
Print  |
RSS
More Insights
Webcasts
The Failures of Static DLP and How to Protect Against Tomorrow's Email Breaches
How Elite Analyst Teams are Transforming Security with Cyber Reconnaissance
More Webcasts
White Papers
What To Consider Before Renewing Your SD-WAN
Five Reasons to Protect your VPN with Multi-Factor Authentication
More White Papers
Reports
Are Unprotected Cloud Databases Leaking Your Data?
DNS Network Traffic Volumes During the 2020 Pandemic
More Reports
Copyright © 2021 UBM Electronics, A UBM company, All rights reserved. Privacy Policy | Terms of Service