Your iPad At Work: Worth The Trouble? - InformationWeek

Here's everything you need to know but were afraid to ask about using your iPad for work. Hint: It can be done, but there are hurdles.

My BYTE colleague Boonsri Dickinson recently traveled with her iPad for work and found it wasn't that easy. I, too, have tried to integrate my iPad into my work life, but like Boonsri, I've struggled. 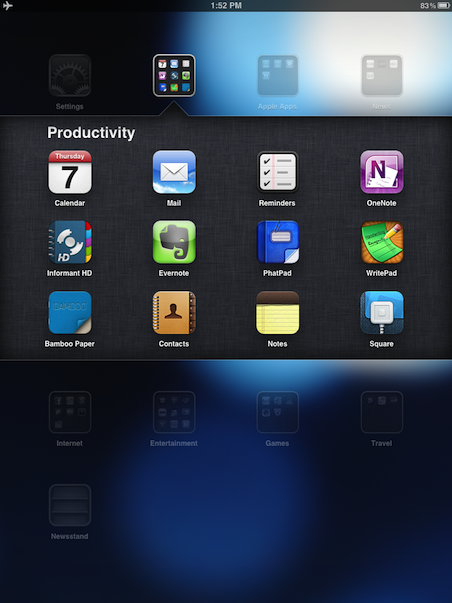 If you're determined to do serious work on your iPad, I've found there are two credible use scenarios: the iPad as notepad replacement, and the iPad as notebook replacement. One or both might be possible for you depending on your job. But you'll need to install the right software and peripherals to make it work, and even then it's going to be hard to accomplish some tasks. Let's look at what you'll need.

iPad as notepad replacement
After two years of trying I'm still surprised at how nearly impossible handwriting on an iPad actually is. You would think that taking notes on the touchscreen would be easy. It isn't. And it boils down to one hardware issue and one software issue: the iPad's capacitive screen technology with multi-touch, and the lack of handwriting recognition.

Resting the side of your hand on the screen as you write with a capacitive stylus--writing with your finger doesn't work--confuses the iPad into thinking you're trying to do a strange multi-touch thing. Drawings, handwriting, and other inking are destroyed or are gibberish as a result. It doesn't help that iOS still does not recognize handwriting. Tablet PCs running either Windows 7 or Windows 8 support it natively.

The best chance you have for legibility is to use an iPad 2 or better. I've noticed that there's serious lag that I'm not willing to tolerate when trying to write on my old iPad in either Evernote or OneNote for iOS. The more powerful processors in either the iPad 2 or New iPad provide the best chance for legible handwriting.

Here are the extras you'll need to use your iPad as a notepad replacement at work:

Using an iPad as a notebook
The biggest hurdle to using an iPad as a notebook at work is usually a company's security policies. If personal devices aren't allowed to directly access the corporate network, you might be out of luck. On the other hand, if you'd planned on using a 3G/4G/LTE cellular connection, with or without VPN or other remote access or remote control software, to access your company network, security might not be an issue.

If corporate access is not a problem, you're home free. Setting up an iPad as notebook replacement is easy and rather effective. All you'll need is iWork or other software capable of creating and editing Microsoft Office-compatible documents, and an easy way to hop on the network, which will probably be via Wi-Fi.

As for me, I'd love to use my iPad as a digital notepad and go totally paperless--but I can't. In a totally unrelated gotcha, we're not allowed to use keyboards in meetings where I work because they're too distracting. But if things ever change, you'll find me tapping away on my iPad at work.