Android will dominate iOS and Windows in a sluggish tablet market over the next five years. However, Microsoft is expected to grow its marketshare.

Experts have low expectations for tablet sales in the year ahead, as indicated by research from IDC. Its five-year forecast has been scaled back, predicting slow but positive growth as commercial demand increases and Microsoft Windows gains a presence in the market.

The news follows a poor quarter towards the end of 2014, during which tablet and hybrid device sales fell for the first time since the market's inception in 2010. Just about every major tablet vendor saw shipments fall, with the exception of Lenovo.

IDC, which released the new data on March 12, doesn't hold much hope for 2015. Global tablet shipments are expected to hit 234.5 million units, a small increase of 2.1% from 2014. The phablet craze has weakened the demand for tablets among consumers, who don't see a benefit to purchasing a touchscreen device that so closely resembles a smartphone.

Despite the increasing popularity of phablets, there are still customers who demand a larger screen size for functions that aren't compatible on a smartphone. Enterprise customers who use applications like Microsoft Word and Excel likely comprise a large portion of this market.

While some vendors might be content to rely on enterprise customers, others are working to boost sales by slashing prices and integrating features such as voice calling into tablet devices. The battle between phablets and voice-capable tablets will be an interesting one to watch, notes Jitesh Ubrani, senior research analyst at IDC.

The market will also see a shakeup among its top players. Android will remain on top, dominating two-thirds of the market over the next five years. Former leader iOS will likely be the weakest link, IDC predicts, as its share plummets throughout 2015 to its lowest levels over the past three years. 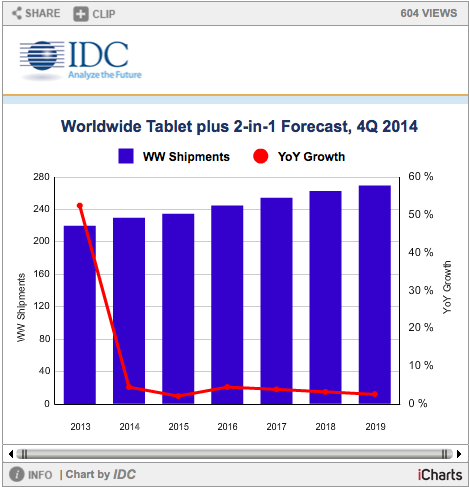 iOS might be facing some stiff competition from Windows. Despite modest adoption to date, Windows is expected to make significant progress over the next five years. Its marketshare is expected to escalate from 5.1% in 2014 to 14.1% in 2019.

Productivity features will likely stay in high demand among tablet customers going forward. They're critical to the functionality of Windows 10, which should have a tremendous impact on Microsoft sales – and the tablet industry – when it launches later this year.

"There is an appetite for a platform that can provide a productivity experience that remains consistent across multiple form factors and device types," Jean Philippe Bouchard, research director for tablets at IDC, wrote in a statement. "We believe Microsoft is well positioned to capture some of that demand."

Kelly Sheridan is the Staff Editor at Dark Reading, where she focuses on cybersecurity news and analysis. She is a business technology journalist who previously reported for InformationWeek, where she covered Microsoft, and Insurance & Technology, where she covered financial ... View Full Bio
We welcome your comments on this topic on our social media channels, or [contact us directly] with questions about the site.
Comment  |
Email This  |
Print  |
RSS
More Insights
Webcasts
Nip Ransomware in the FUD: Detecting Attacks Pre-Encryption
Don't Miss This Cybersecurity Virtual Event
More Webcasts
White Papers
High Performance Applications with the Dominion KX III
A Business Case for Vulnerability Remediation Orchestration
More White Papers
Reports
Gartner Market Guide for Insider Risk Management Solutions
Building the SOC of the Future
More Reports

I would have liked to seen the numbers compared between the slight dip in tablet sales and how well laptops are faring. It can't be a matter of phones getting the benefit of all this "niche-ness" of tablets, can it? Phones' input options are even worse than tablets. Even if you go to a phablet, gosh darn if you don't get a headache and/or carpal tunnel after emailing/txting too much at a time.
Reply  |  Post Message  |  Messages List  |  Start a Board


@Gary_EL    I agree  and tablets are not the type of item people will so easily upgrade.


I would think most would be as I have done myself.  I started off small( 7") just to see if I liked it and then went 10" after I was convinced I could get something out of it.  Each time it was Android OS without a second thought.


I think you are right - Microsoft just wants to say they have a product in this niche and don't expect to ever make any significant revenue from it.


With all this talk about Apple it is nice to see them taking a beating on the tablet OS front.   I think most people took their tablet leap in the last few years, especially last X-mas ( which seems to go against what is mentioned in the piece) so I would expect the demand to lower somewhat.


Windows expects to gain some marketshare ?   That is surprising.  One would think there is not much room left for them to make significant inroads.

Sure they have designed their OS to be "tablet-like" but I would not necessarily see that impacting Windows based tablet sales.


It will be interesting to see what the numbers for 2015 will be.

The problem with tablets is that they're a niche market, mostly useful for business or professional users who need a fairly large screen and who run either a large, proprietary application or, as Kelly suggests, parts or all of something like Microsoft Office. I can't imagine that there will be much room for profit in this shrinking arena, but all the players will want to retain a presence, if for nothing else other than for appearances
Reply  |  Post Message  |  Messages List  |  Start a Board

The problem is that Windows just doesn't have a great UI experience like some of its tablet competitors.

Realistically, the only true differentiator there is has to do with inputs. Tablets simply do not have great inputs, and I don't see that changing anytime in the near future what with the way speech recognition and AI is progressing slower than many expected.
Reply  |  Post Message  |  Messages List  |  Start a Board
Editors' Choice
Hot Topics

Communications & Collaboration: 2024 (March 9-10)Network Security for 2021 and Beyond (April 29)Baking Cybersecurity Into Enterprise IT (April 29)