Windows 8.1 Vs. iPads: Battle For The Classroom - InformationWeek

With more schools looking to integrate technology into the classroom, the education market is more crowded than ever. Over the last few years, Apple's iPad has been a poster child for one-to-one deployment programs, which seek to put a computer or tablet in the hands of each student. Windows devices, however, have begun to mount a comeback.

Apple, Microsoft, and other tech companies have long considered students an important demographic, believing that if pupils embrace a certain technology in the classroom, they'll continue using it as adults. Recently, Apple has had more momentum than many competitors. When students returned to schools last fall, iPads controlled 94% of the US market for education tablets, according to research firm IDC. But thanks to agreements with some of the nation's largest school districts, Windows devices should play a bigger role this year.

The Los Angeles Unified School District (LAUSD) is the most high-profile new Windows customer. The nation's second-largest school system, LAUSD last year announced a much-hyped plan to spend up to $1 billion to equip its students with iPads. The district still plans to use iPads, but after experiencing a variety of problems with the initial rollout, LAUSD leaders decided to give students and teachers more options. 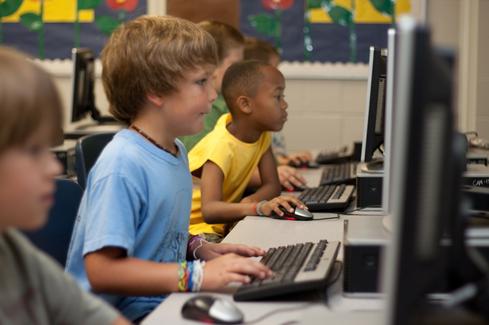 Administrators at 27 LAUSD high schools, or a little more than a quarter of all high schools in the district, can now choose from an expanded device lineup that includes not only Windows devices such as Microsoft's Surface Pro 2, Lenovo's Yoga, and Dell's Latitude E7420, but also Chromebooks. The new models will be tested in the fall before the district decides its next moves.

LAUSD isn't the only large district that's recently embraced Windows 8.1. Following a two-year pilot, Pasadena Independent School District in Texas plans to deploy 12,900 of Dell's Venue 11 Pro 2-in-1 tablets, as well as Office 365. The district had originally considered a Windows 7-based program, but decided to go with the Windows 8.1-based Venue 11 Pro because of its stylus and digital ink capabilities.

Even last year, when tablets were cannibalizing PC sales faster than anyone predicted, some schools had begun to reconsider iPads, reasoning that without a keyboard or desktop apps, Apple's tablets couldn't serve all needs. LAUSD came to the same conclusion.

The district's iPad program, whose initial costs were covered by a $30 million voter-backed bond, experienced a variety of problems. Some students complained the screen was too small for exams. Others struggled without keyboards. Still others managed to circumvent the district's security measures, and to access restricted apps such as YouTube and Facebook.

Dealing with these problems, as well as lost devices and miscommunication regarding the program's cost, LAUSD has scaled back its iPad deployments, at least for the moment. In the meantime, several schools are reportedly pleased with the new device options. According to a report in the LA Times, teachers who chose the new Windows options praised the versatile form factors of Windows 8.1 hybrids, as well as the opportunity to use styluses during instruction.

Though Microsoft and its partners have posted notable wins, Apple isn't backing down. Earlier this week, the company announced an update to iTunes U that will let teachers use the free iPad app to create, edit, and manage courses. Moreover, plenty of schools are still buying Apple products. Minnesota's St. Paul Public Schools, for example, just approved a multi-million dollar deal for thousands of iPads and MacBooks. There's also some evidence iPads have helped students achieve higher test scores.

The market is only getting more competitive. Samsung and Amazon are also building tablet-oriented education programs. Panasonic recently jumped into the ring as well, announcing not only its education-centric 3E tablet, but also complimentary projectors, interactive displays, and software. Google's Chromebooks, mentioned earlier, are also becoming popular low-cost options.

Ultimately, LAUSD board member Monica Ratliff probably has the best take on the growing diversity of options. "To have a one-device-fits-all approach does not make sense," she told the LA Times.

Michael Endler joined InformationWeek as an associate editor in 2012. He previously worked in talent representation in the entertainment industry, as a freelance copywriter and photojournalist, and as a teacher. Michael earned a BA in English from Stanford University in 2005 ... View Full Bio
We welcome your comments on this topic on our social media channels, or [contact us directly] with questions about the site.
Comment  |
Email This  |
Print  |
RSS
More Insights
Webcasts
Architecting Security for the Internet of Things
Succeeding With Secure Access Service Edge (SASE)
More Webcasts
White Papers
The Protector's Guide
Reducing Data Breach Risk From Your Remote Workforce
More White Papers
Reports
Building an Effective Cybersecurity Incident Response Team
2020 State of Cybersecurity Operations and Incident Response
More Reports

For elementary school kids, a mix of tablets probably serves them best. By the time these kids get into the workplace, who knows what they'll be using?! Having spent plenty of time volunteering at local K-8 grades, I've seen how younger students treat technology. They're not malicious or bent on destroying these devices, but many kids aren't particularly gentle. In light of that, I say buy the most reliable yet cheapest tablets. And if you want to give them access to iPads, buy a few -- but don't standardize on these more expensive devices.
Reply  |  Post Message  |  Messages List  |  Start a Board

Seems like Microsoft shot themselves in their own foot because they have since introduced Office for the iPad, so the momentum for Windows 8.1 devices to get into education will halt or stay as it is for a long long time. It also defeats the Googlechrome crowd chat that iPad is for consumption while the Chromebook is for productivity - like it or not, MS Office is still percieved to be better than the Google solution. And Office has caught up and is now cloud based too - chomping at the Google advantage they once had.
Reply  |  Post Message  |  Messages List  |  Start a Board

50%
vpositano950,
User Rank: Apprentice
7/2/2014 | 4:13:01 PM
Partisans used to want nothing but PCs, but now are begging to get in on the action, showing their irrational and partisan hate for Apple products.

Pro-PC partisans used to want nothing but PCs because, you know, that's what people used on the job, but now they refuse to acknowledge that businesses use iPads, so now they push all kinds of weird unpopular, non-iPad devices in the name of "one size does not fit all." *LOL

But we know what's really going on: They are begging to get in on the action, showing their irrational and partisan hate for Apple products.
Reply  |  Post Message  |  Messages List  |  Start a Board

If that teacher promotes the idea that "one size does not fit all," then why is the school administrator's office and the offices of his/her staff stuffed with Windows PCs and no Macs?
Reply  |  Post Message  |  Messages List  |  Start a Board

People in my G+ stream have been sharing this article 3 Reasons Why Chromebook Beats iPad in 1:1 Programs
Reply  |  Post Message  |  Messages List  |  Start a Board
Editors' Choice
Hot Topics