From Acer to Lenovo, hardware makers showed off early versions of Windows 8 tablets at the Computex tradeshow. Take a look. 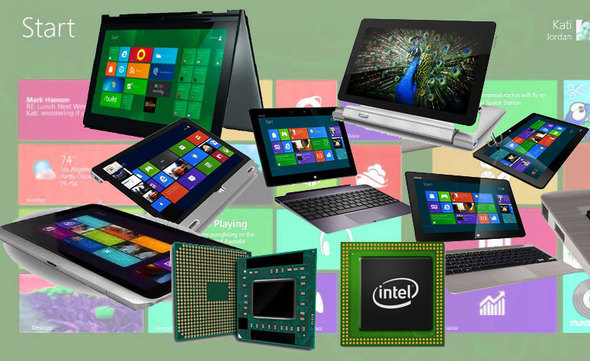 The just-concluded Computex techfest in Taipei was all about Windows 8 this year, as vendors took the wraps off a range of new systems--from tablets to hybrids to laptops. The introductions are the latest evidence that Windows 8 may arrive sooner, rather than later, with some industry watchers expecting a September or October launch.

Whenever Windows 8 debuts, there will be no shortage of devices to choose from, if Computex is any indication. Hardware makers are building tablets that use ARM-based chips and run Windows 8 RT, as well as systems running Windows 8 on Intel's Atom architecture (formerly known as Clover Trail). Not to be left out, Advanced Micro Devices showed off a prototype tablet running its Trinity chip.

Vendors also put the spotlight on numerous new Windows 8 Ultrabooks, some of which also use the Intel Atom.

Despite all the hardware options, Windows 8 remains a big bet for Microsoft. It represents the boldest redesign of the operating system since Windows 95, which introduced now familiar features like the Windows Taskbar and Start menu.

Speaking of the latter, it's been replaced in Windows 8 by the Metro interface, which provides access to applications through Live Tiles, blocks of screen real estate that serve up real-time information from email, messaging, social networking, and other services. Microsoft believes the new, app-centric interface, which is borrowed from Windows Phone 7, will appeal to consumers who have become used to using smartphones as their primary computing tool.

Here are a few more key facts about the operating system: Microsoft has tapped Dolby Laboratories to provide immersive audio on Windows 8 PCs and tablets. Among other things, it means Windows 8 systems will be able to output 5.1 channel audio to home theater systems from Blu-ray discs and other media.

However, Windows 8 won't include DVD playback from Windows Media Player because, the company says, most media is now consumed from online sources such as YouTube and Hulu, so the cost of supporting all the codecs needed for DVD playback is no longer worth it. Also, Windows Media Center, which lets you record and play back video and audio from broadcast TV and other sources, will no longer be offered as an included part of Windows. Users will have the option of purchasing either the Windows 8 Media Center Pack or the Windows 8 Pro Pack if they want access to Media Center.

On the plus side, all Windows 8 devices, as well as future versions of Windows Phones, will automatically connect users to a free SkyDrive account as soon as they log in. in addition, Microsoft's Family Safety app allows parents to monitor their kids' online usage, filter content, and block certain sites. Microsoft also said it plans to discontinue Windows Live, a catch-all brand name that the company used to refer to a wide range of desktop and Internet services that it admitted was confusing to customers.

Whether consumers will accept the radical redesign remains to be seen. As for enterprise users, Windows 8 won't likely be on the radar for most business organizations for another couple of years, as the majority of them are only now beginning the process of moving from Windows XP to Windows 7.

Here's a look at some of the tablet options that will be available for those that do decide to make the OS switch.