Will Microsoft Launch Surface Mini Tablet In May? - InformationWeek

Microsoft's long-rumored Surface Mini could debut next month, based on new Amazon listings for accessories.

Microsoft's much-rumored Surface Mini jumped back into the headlines this week, thanks to Amazon listings that seem to offer accessories for the still-unconfirmed device.

A Chinese company euphonically called Vostrostone listed the products, a $10 smart cover and a $33 keyboard folio case with detachable Bluetooth keyboard. According to the product descriptions, each accessory is designed specifically for the Surface Mini, complete with cutouts that provide access to ports and controls. Vostrostone's listings indicate the Surface Mini will have an 8-inch screen but do not otherwise reveal any specs. The listings claim the items will be in stock on May 18.

Surface Mini rumors first popped up in late 2012, shortly after Microsoft launched the original Surface RT to substantial fanfare but poor sales. Companies sometimes share product information with third-party accessory partners before launch, so it's possible Vostrostone's listing portends an imminent Surface Mini launch. That said, case makers have been known to base designs on rumors and speculation. Rather than pulling out your credit card to pre-order the new accessories, you should probably wait to see if the tablet actually materializes.

Recent reports suggest a Surface Mini is coming. A Mini was expected to debut last year alongside the Surface 2 and Surface Pro 2, but Windows blogger Paul Thurrott, who provided pre-release details on several other Surface products, said Microsoft delayed its smaller tablet at the last minute. Around the same time, ZDNet's Mary Jo Foley reported, citing unnamed inside sources, that the Surface Mini would debut in spring 2014.

This week, Foley said the device is ready to be announced and will come with a stylus. This squares with a recent rumor that note-taking will factor heavily into the Surface Mini's appeal. It also opens the possibility that Microsoft will soon launch touch-first, Modern-style Office apps for Windows. The company's recent Office for iPad release generated 12 million downloads in its first week. It also seemed to nullify Windows tablets' biggest would-be advantage over competitors. Microsoft already has confirmed that Modern Office apps are coming, but it hasn't explained to what extent they'll differ from the new iPad versions. If Microsoft has an advance in pen-style note-taking up its sleeve, the company could turn a few heads. 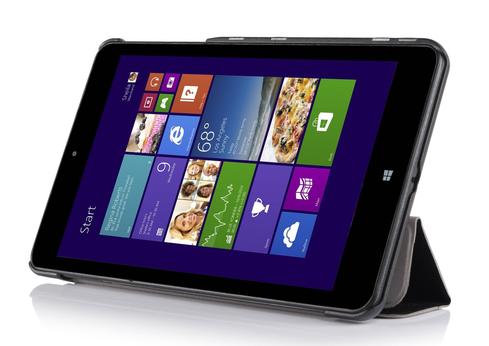 Vostrostone's Amazon listing says its Surface Mini smart cover will be available May 18.

Reports last year claimed the Surface Mini would use a Qualcomm ARM processor, which indicates the device will, like the Surface RT and Surface 2, run Windows RT 8.1, without support for desktop apps. Microsoft reps have repeatedly said they see a future for Windows on ARM-based devices. Microsoft might have changed its plans, of course; some newer Windows mini-tablets such as the Dell Venue 8 Pro use Intel chips that can run the full Windows operating system. Though it's debatable if desktop apps are useful on such small screens, Microsoft might opt to follow Dell's lead.

Surface devices initially posted embarrassing sales numbers, but buyers warmed up slightly over the holidays, spurred by both new models and price cuts to first-generation devices. Windows tablets represent only a small portion of the market. Earlier this year, research firm Gartner said Windows devices represented only 2.1% of the market in 2013. In December, IDC offered a slightly rosier estimate of 3.4%.

Emerging standards for hybrid clouds and converged datacenters promise to break vendors' proprietary hold. Also in the Lose The Lock-In issue of InformationWeek: The future datacenter will come in a neat package (free registration required).

Michael Endler joined InformationWeek as an associate editor in 2012. He previously worked in talent representation in the entertainment industry, as a freelance copywriter and photojournalist, and as a teacher. Michael earned a BA in English from Stanford University in 2005 ... View Full Bio
We welcome your comments on this topic on our social media channels, or [contact us directly] with questions about the site.
Comment  |
Email This  |
Print  |
RSS
More Insights
Webcasts
Data Protection Strategies and Secrets - 12/10 @ 11am EST
Architecting Security for the Internet of Things
More Webcasts
White Papers
5 Key Steps for Assessing Your Security Effectiveness
Democratizing Data Management With a Self-Service Portal
More White Papers
Reports
Evolution of Ransomware Gangs
Annual Global State of the WAN
More Reports

I'm not placing much stock in the fact that a company in China is offering peripherals for an object that for all we know is imaginary at this point.

"Specifically designed for the Surface Mini" when the Surface Mini isn't out yet.  Either there's likely a major breach of an NDA contract going on here, or it's a fraud.
Reply  |  Post Message  |  Messages List  |  Start a Board

The fact that each accessory is designed specifically for the surface mini tells us that it is made for the consumer to fit his or her own needs plus the fact that it will have an 8-inch screen is great. This is amazing especially the fact that each cut out provides access to ports and controls.  The time is also perfect and I believe there is a ready and willing market to purchase it.
Reply  |  Post Message  |  Messages List  |  Start a Board

@Thomas, it is true that going by what we are used to experiencing in the world of mobile computing, the launch of a mini Microsoft tablet is just a matter of time and this is something that I can bet my bottom dollar. So if you are the speculative type you might as well just go ahead and start buying the accessories as you wait for the launch. The only downside to this approach though is that maybe, just maybe, the manufacturers of the accessories based their information on rumors and the specs they used end up being different from the actual specs.
Reply  |  Post Message  |  Messages List  |  Start a Board

Its going to ship with RT? I have already seen this movie, it flopped.
Reply  |  Post Message  |  Messages List  |  Start a Board

Not exactly.  What I want to do is have a 5" device that is powerful enough to dock and use as a desktop while I'm in my office, use for emergency issues when I'm on the road and dock into a laptop style system when I'm traveling or sitting at home.  It's one device with the flexibility to do what I need it to do when I need it in that configuration.  As it is I use a Surface Pro 2 that is docked to a 27" display on my desk at work and then use it as a small laptop when out of the office.
Reply  |  Post Message  |  Messages List  |  Start a Board

I did - 10 years ago.  I actually used a Fujitsu Sytlistic LT (233 Mhz, 64 MB RAM, 6GB HDD, 8" 800x600 resistive touch screen, Win98) on a work trip (30 hours on train each way since I could not fly for health reasons - whew). with its IR keyboard in stand case that opened up to position the keyboard like a clamshell. The case and tablet were around 5LBs, and I could sling it over my shoulder to hang by my side like a woman's purse. That beat the heck out of dealing in the tight train quarters, and all the moving around the stations with a bad back rather than dealing with the big briefcase-sized package of the corp-issued Thinkpad T20. I could connect to the corp VPN, run Lotus Notes for email, SameTime for chatting, ssh to Solaris servers I supported, run Open Office, etc.

I now use a Fujitsu Lifebook P1620 as my personal travel PC since it took most of those Stylistic characteristics and upgraded them tremendously while making the package even smaller and more portable with the bonus of a built-in keyboard bigger than usual for a 8.9" inch screen since it used Fujitsu's version of IBM's Trackpoint, and thus did not waste so much space on a touchpad with the big blank spaces next to it - all the more room for KEYS!  And I can hook it up to full-sized peripherals such as keyboard/mouse/monitor if needed.

I would like it to be about half as thick like more modern ultrabooks and 2-in1 tablet/keyboard combos, and take SATA SSD's (although  I managed to find a ZIF/PATA connectable 64GB SSD on eBay for it).  The current Surface Pro/2 are appealing upgrades with their 10.8" screen being a reasonable size increase for the much greater resolution.   I will have to give a Surface Mini a look if they really materialize, but 10-11" are probably a better size for my aging eyes as long as they have more vertical height than a measly 768 pixels.

Anyway, even that beats heck out of trying to use similar apps on a phone for "productivity" such as a Galaxy Note 2 that I tried for about a month, but it was just sticking out and bumping/snagging things too much from my belt holster - back to a Droid Razr HD which keeps out of the way much better while still providing decent viewing real estate and better accessories like car and mulitmedia docks (if only MotoGoogle had not killed off Webtop with the Bionic JellyBean update, and for subsequent Droids; the Razr could be a near-laptop replacement in a Moto Lapdock...).
Reply  |  Post Message  |  Messages List  |  Start a Board

You want to run desktop apps on an 8" screen? Seriously?
Reply  |  Post Message  |  Messages List  |  Start a Board

I agree but shouldnt it run a full functioning Windows 8.1? Not being able to run desktop apps is a big minus for me.
Reply  |  Post Message  |  Messages List  |  Start a Board

Since Apple, Google, Amazon, and Microsoft all follow each other in lock-step, we must see a Windows mini-tablet eventually.
Reply  |  Post Message  |  Messages List  |  Start a Board
Page 1 / 2   >   >>
Editors' Choice
Hot Topics