Will Isis Make Paying With Your Smart Phone Popular? - InformationWeek

50%
Tweet
The Isis digital wallet, a joint effort by Verizon Wireless, AT&T, and T-Mobile USA, is almost here, with trials set to begin at stores in Austin and Salt Lake City. Will this be the wallet that finally popularizes paying by smart phone?

Your phone might soon be all you need to pay for items at the store. Mobile wallet service Isis will conduct its first trials at several retail stores in Austin, Texas, and Salt Lake City on Oct. 22. 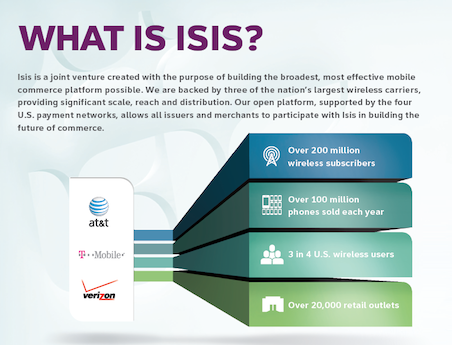 Isis is a joint effort by Verizon Wireless, AT&T, and T-Mobile USA to develop a platform for making payments from mobile devices. Handsets that are enabled with a near-field communications (NFC) chip can communicate with checkout terminals to make payments at partnering merchants. To make a payment, you simply tap your NFC-enabled smart phone against the payment terminal.

"By year end, as many as 20 Isis Ready handsets are expected to be [on the] market," Isis spokesperson Jaymee Johnson said in an e-mail, although he declined to name the devices it will be available on. First announced in 2010, Isis was expected to launch the mobile payment service earlier this year but experienced delays.

There are several merchants in Austin and Salt Lake City that will use the Isis service. For Salt Lake City the website lists as participants several McDonald's, 7 Eleven, Rite Aid, Home Depot, Footlocker, and Macy’s locations.

Some phone manufacturers, including Nokia and Samsung, already have begun to sell NFC-enabled handsets, although Apple opted not to include the NFC chip in the just released iPhone 5. Instead, it integrated Passbook, a precursor to a mobile wallet, in its iOS 6 mobile operating system. This has led some industry observers to speculate that mobile payments will not gain widespread adoption in the U.S. for a while yet.

Isis also faces competition from several other mobile payment services including Google Wallet, Visa's V.me digital wallet, and Serve from American Express. Also, Discover announced in August that it is working on a deal to equip more than seven million merchants with PayPal in physical stores.

We welcome your comments on this topic on our social media channels, or [contact us directly] with questions about the site.
Comment  |
Email This  |
Print  |
RSS
More Insights
Webcasts
5 Steps to Integrate SAST into the DevSecOps Pipeline
Cloud Security Threats Enterprises Need to Watch
More Webcasts
White Papers
Using AI to Power AppSec
[IT Trend Report] The Future of Cloud
More White Papers
Reports
Can You Spare 10-12 Mins to Help Us Out with a Survey on Tech Trends?
Got 7 Minutes? Dark Reading Needs Your Help With Our Survey on Incident Response
More Reports