Via Plus, an application platform which will ship with all of the company's televisions, Blu-ray disc players, smartphones, and tablets, will also be demoed at CES. 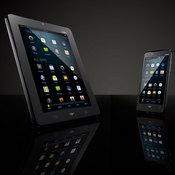 Vizio Via Phone And Via Tablet
Vizio, best known for low-priced high-definition TVs, has made its debut in the tablet and smartphone market. The company introduced Monday the Via Phone and Via Tablet, which will be demonstrated at the Consumer Electronics Show that opens Thursday in Las Vegas.

In addition, Vizio unveiled an application platform called Via Plus, which will ship with all of the company's televisions, Blu-ray disc players, smartphones, and tablets.

The Via Tablet features a 1-GHz processor and an eight-inch touchscreen. The device lacks a 3G wireless connection, offering only 802.11n Wi-Fi for connecting to the Internet. Other features include Bluetooth wireless, GPS, a MicroSD slot for additional storage, HDMI output, high-definition video playback, and a front-facing camera for video calling. The tablet also has a three-speaker design for stereo audio.

Except for its 4-inch touchscreen and 5-megapixel camera, the Via smartphone has the same features as the tablet. Both devices run Google's Android operating system, which will give customers access to the Android Market, the platform's online application store. The new mobile gadgets also include a built-in IR blaster, an application that emulates an infrared remote (IR) control for a Vizio TV or Blu-ray player.

Vizio did not release pricing or say when the new products would be available.

The Via Plus app platform provides the same user interface across Vizio devices and makes it possible for users to move video, photos, and other content among the company's products. HDTVs and Blu-ray players will run Via Plus on the Google TV platform and feature a Bluetooth QWERTY remote control with touchpad and built-in 802.11n Wi-Fi. The controller provides onscreen navigation, including search and Web browsing.

Via Plus on all Vizio devices will make it possible for users to search, organize, and access applications downloaded from the Android Market. Features include the ability to group apps by categories, customize a dock with the most frequently accessed apps, or switch apps with a multitasking bar.

Vizio won't be the only consumer electronics company introducing tablets at CES. Others expected to unveil products include Toshiba, Motorola, Research in Motion, Asus, and Acer. Apple launched its first tablet, the iPad, last April and currently accounts for more than 95% of the market, analysts say. Samsung launched the Galaxy Tab in September, and said in December that it had reached sales of 1 million units. Market researcher iSuppli believes Apple sold 13 million iPads last year.

We welcome your comments on this topic on our social media channels, or [contact us directly] with questions about the site.
Comment  |
Email This  |
Print  |
RSS
More Insights
Webcasts
The Failures of Static DLP and How to Protect Against Tomorrow's Email Breaches
Strategies for Success with Digital Transformation
More Webcasts
White Papers
The Trouble with Phishing
IDC Workbook: Best Practices for Cloud Security
More White Papers
Reports
Special Report: Edge Computing: An IT Platform for the New Enterprise
2020 State of Cybersecurity Operations and Incident Response
More Reports
Copyright © 2021 UBM Electronics, A UBM company, All rights reserved. Privacy Policy | Terms of Service