50%
Tweet
The 10-inch, dual-boot ViewPad tablet runs an Intel Atom processor and has two USB ports for a keyboard and mouse. 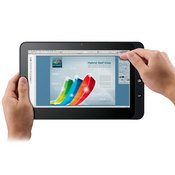 ViewSonic is the first to start selling a dual-boot tablet that supports two operating systems -- Windows 7 and Android.

The electronics manufacturer, which also makes computer monitors, TVs, and projectors, released the ViewPad 10 on Monday. The 10-inch tablet was first introduced in November.

The ViewPad 10 supports Microsoft's operating system and Android 1.6, an older version of Google's smartphone/tablet platform. Azpen Innovation introduced a similar dual-boot system at the Consumer Electronics Show in Las Vegas, Nev., in January, but has yet to start selling it.

Android 1.6 is several generations behind Android 3.0, called Honeycomb, which is the first tablet-specific version of the platform. One major drawback of Android 1.6 is the inability to run Adobe Flash, the ubiquitous platform for playing video on the Web. ViewPad 10 users have to switch to Windows 7 to play Flash.

Another drawback is the tablet does not include 3G connectivity. ViewSonic has released its latest device without the support of a wireless carrier, opting instead to provide Wi-Fi for accessing the Web and Bluetooth for connecting to other devices.

The ViewPad 10 does provide two USB ports, making it possible to tap into a carrier's 3G network by purchasing a USB modem and paying the carrier a monthly service charge. The ports also can be used to attach a keyboard and mouse when using productivity applications, such as Microsoft Word, while in Windows.

The ViewPad 10 runs a 1.66 GHz Atom processor from Intel and has 2 GB of system memory. The device has a 1024- by 600-pixel touch screen and a 1.3-megapixel webcam with built-in microphone for videoconferencing. The tablet also has a microSD card slot for up to 32 GB of additional storage.

Reviews for the ViewPad 10 have said that the use of Android 1.6 makes the ViewPad 10 out of date and not a challenger to the Apple iPad and other Android tablets. The Wall Street Journal called the Android part "half-baked." The ViewPad 10 is also seen as pricey for the features it offers.