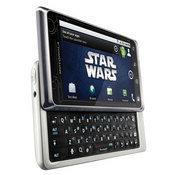 Around 100 stores will host the event and each participating store will only sell 200 units and customers will be limited to two per person. Five devices will also reportedly be given away at each participating store, and the event will have employees dressed as Stormtroopers, according to Boy Genius Report. The Motorola Droid R2-D2 features an improved 1.2GHz processor compared with the standard smartphone, which has a 1GHz CPU.

The smartphone will also be available online at Verizon's website.

Pictures from a site Verizon created to promote the Motorola Droid R2-D2 and to sign up to receive news updates, show that the back of the phone has a white design and the front looks like the Astromech Droid from Star Wars.

The special edition device features include a digital dual mode 3G, Bluetooth, an 854 x 480 resolution, 8GB, 5-megapixel camera, and 3.5mm audio jack. The smartphone will also come with exclusive Star Wars content from Star Wars: Episode V The Empire Strikes Back, such as R2-D2 notification sounds and ringtones; four live wallpapers; an R2-D2 clock widget; "The Best of R2-D2" video with the original Cantina music; and a binoculars app, the carrier said.

The Droid R2-D2 will come packaged in a box resembling carbonite and include a Star Wars media dock and wired stereo headset. The smartphone will cost $249 after a $100 mail-in rebate and a new two-year contract, along with a subscription to a phone and an email/web plan.

Verizon Wireless customers with Android devices running the 2.1 version of the OS or higher can access an Empire Strikes Back app from Android Market for $2.99, which has games, sounds, a photo gallery, live wallpapers, trivia questions, and widgets.

2021 State of ITOps and SecOps ReportIn this report from InformationWeek, we explore what we've learned over the past year, critical trends around ITOps and SecOps, and where leaders are focusing their time and efforts to support a growing digital economy. Download it today!
Download This Issue!