Following a failed crowdfunding effort, Canonical is ready to release the first smartphone based on its popular Ubuntu Linux distribution. Can it compete against the likes of Apple iPhone and Android devices?

In the next few days, the first mobile phone based on Canonical's Ubuntu Linux is scheduled to debut in Europe, through Spanish electronics company BQ. It offers a unique spin on the typical smartphone user interface, and a fairly attractive price point. The key question is whether it can break ground in a market dominated by Apple and Android smartphones.

The Aquaris E4.5 Ubuntu Edition, priced at 169.90 Euros (~$192.31), will be offered through a series of "flash sales," announced next week through social media accounts: @Ubuntu and @bqreaders on Twitter, Ubuntu G+, and Ubuntu Facebook.

UK-based Canonical and BQ are following in the footsteps of Chinese smartphone maker Xiaomi, which last summer sold hundreds of thousands of low-priced Redmi 1S smartphones in India. Xiamo made its devices available through online vendor Flipkart only for brief periods.

Available in black, the Aquaris E4.5 Ubuntu Edition comes with 8GB of storage, a 5MP front camera, an 8MP rear camera, a 1.3 GHz MediaTek Quad Core Cortex A7 processor, and 1GB of RAM.

Canonical's initial effort to enter the smartphone market began with a crowdfunding campaign to raise $32 million to produce the Ubuntu Edge in July 2013. The company attracted pledges amounting to more than $12 million, but had to return funds because it opted for an all-or-nothing campaign structure.

Jane Silber, CEO at Canonical, in a statement celebrated the arrival of the first Ubuntu phone as a significant milestone for the company. "The new experience we deliver for users, as well as the opportunities for differentiation for manufacturers and operators, are a compelling and much-needed change from what is available today," said Silber. 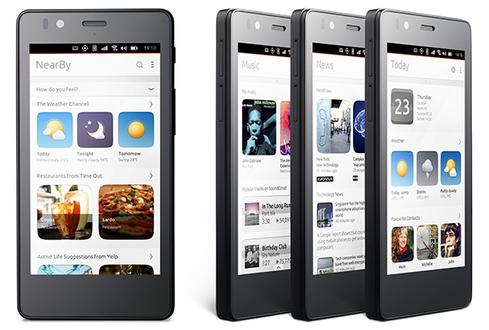 The "new experience" Silber describes refers to the Aquaris E4.5's novel user interface. The phone relies on a card-oriented interface, similar to Google Now. These cards, called Scopes, aggregate categorically relevant content that, on an Android or iOS phone, would be presented in separate apps. For example, the "Today" card contains calendar data, weather data, and contact data. Users can swipe between Scopes, a slightly more efficient way to shift applications than exiting an app, navigating to a new one, then opening it.

Users can also access apps individually from a Scope, or through a vertically oriented app menu that slides into view, a departure from the app icon sets displayed in Android or iOS.

Cristian Parrino, VP Mobile at Canonical, said in a statement that Scopes provide developers with "a much simpler and more valuable way to build mobile experiences than apps."

It remains to be seen whether developers see enough value in Canonical's approach to create distinct apps, using either HTML5 or JavaScript-based QML, for Ubuntu phones. Smartphone operating systems other than Android, iOS, Windows, and BlackBerry account, collecitvely, for about 0.6% the US, 0.2% in Germany, and 0.8% in China as of December 2014, according to Kantar Worldpanel ComTech. This means developers have very little incentive to create Web-based mobile apps for Canonical.

However, the opportunities for growth in the smartphone market look as if they will be outside of the US and Europe. That could convince mobile developers to give a second chance to Web-based apps, which lost out to native apps in popularity.

In price-sensitive markets, the Aquaris E4.5 has an opportunity to gain ground by virtue of its affordability. Research firm IDC expects that average smartphone prices in emerging markets, such as India, will decline from $135 per device in 2014 to $102 per device by 2018. And Gartner in December 2014 said it expects 78% of global smartphone sales will come from developing economies by 2018.

There's an opening for Canonical's phone. But it's trying to pass through the same door alongside makers of low-cost Android handsets, Microsoft's sub-$100 Lumia devices, and Mozilla's Web-based Firefox OS.

Thomas Claburn has been writing about business and technology since 1996, for publications such as New Architect, PC Computing, InformationWeek, Salon, Wired, and Ziff Davis Smart Business. Before that, he worked in film and television, having earned a not particularly useful ... View Full Bio
We welcome your comments on this topic on our social media channels, or [contact us directly] with questions about the site.
Comment  |
Email This  |
Print  |
RSS
More Insights
Webcasts
The Experts Guide to Ransomware Response
Multi-Cloud Data Management for Modern Applications
More Webcasts
White Papers
5 Cost-Free Ways for Teams with Limited Budgets to Improve Security
New Cybersecurity Paradigm
More White Papers
Reports
2021 Application Security Statistics Report Vol.2
Building the SOC of the Future
More Reports
Copyright © 2021 UBM Electronics, A UBM company, All rights reserved. Privacy Policy | Terms of Service