High-end watchmaker TAG Heuer is bumping up production of its Connected smartwatch to 2,000 pieces a week, thanks to strong consumer demand.

Luxury watch manufacturer TAG Heuer is planning on ramping up production of the Connected -- its first smartwatch -- just a month after the product became available.

Company watch chief Jean-Claude Biver told Bloomberg News in a December 4 email interview that production on the smartwatch would ramp up from 1,200 to 2,000 units per week. He also noted that online sales of the watch would likely be suspended until the middle of next year in order to give priority to physical retail stores.

"Considering the success of this single and unique watch, we will develop a collection made out of different varieties, executions and materials at the end of next year or beginning of 2017," Biver told the news service.

Biver added that along with increased production, TAG Heuer might make the device available in gold and diamond editions.

In March, TAG Heuer, Google, and Intel announced the partnership to launch a Swiss smartwatch powered by Intel technology and Android Wear in a marriage of technological innovation with watchmaking credibility. TAG Heuer, which is part of the LVMH Group, began as Uhrenmanufaktur Heuer in 1860 and has long held a reputation as a premium timepiece manufacturer.

The $1,500 smartwatch features an Intel dual-core processor with a max clock rate of 1.6GHz, 1GB of RAM, 410mAh battery, plus a 1.5-inch circular LCD display. 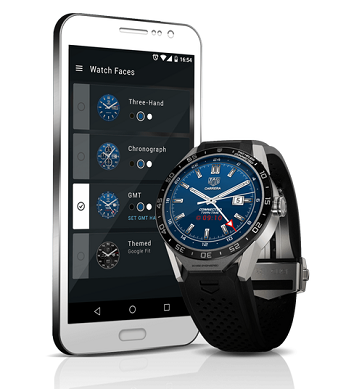 The Connected is also equipped with directional wind and weather monitoring, RaceChrono Pro, a GPS lap timer with analysis features designed especially for motor sports, and Google Fit, a fitness and exercise app. It comes packaged with a custom suite of micro-applications, including alarm and stopwatch features.

[Read why HP and Titan are partnering on a smartwatch design.]

An October report from Juniper Research had TAG Heuer ranked as the ninth-coolest wearable technology brand, Behind Rolex, but far ahead of rival Omega, which placed 16th.

An analysis of more than 6,000 consumer reviews of wearables that was conducted by Argus Insights in November indicated consumers are be less price sensitive to what they consider to be a quality smart watch experience.

Nathan Eddy is a freelance writer for InformationWeek. He has written for Popular Mechanics, Sales & Marketing Management Magazine, FierceMarkets, and CRN, among others. In 2012 he made his first documentary film, The Absent Column. He currently lives in Berlin. View Full Bio
We welcome your comments on this topic on our social media channels, or [contact us directly] with questions about the site.
Comment  |
Email This  |
Print  |
RSS
More Insights
Webcasts
The Experts Guide to Ransomware Response
Multi-Cloud Data Management for Modern Applications
More Webcasts
White Papers
Managed Threat Detection and Response
Cisco Secure Email
More White Papers
Reports
A Decade of Passive DNS
Trustwave Global Security Report
More Reports