The holiday season's annual gift-buying bonanza is now in full swing, and whether consumers turn to Black Friday, Cyber Monday, or any of the other post-Thanksgiving sales, many shoppers will be looking for tablets.

A couple years ago, buying a tablet usually meant buying an iPad, but today's market boasts a veritable cornucopia of options. For those who've enjoyed Apple's tightly-controlled but highly-polished user experience, the newest iPads are better -- and just as expensive -- as ever.  But there are also tablets that run Windows software, Android slates that include features that iPads lack, dozens of different form factors, and options to fit virtually all budgets.

Buying a tablet is more complicated and overwhelming than ever, but fear not: InformationWeek has eight shopping tips that will help you avoid a case of tablet buyers' remorse this holiday season.

1. Do you want a productivity tablet?

As Microsoft's current Surface 2 ad campaign asserts, some tablets are better than others at laptop-style productivity. If hybrid functionality is one of your priorities, Windows tablets are the most natural option, especially since they're the only kind that natively runs Microsoft Office.

If your want a laptop-tablet hybrid, Windows devices are the most natural choice.

Many people are happy using iPads with third-party keyboards, however, even though iOS doesn't support true mulit-tasking, and Apple now offers iWork, its Office competitor, for free with new iOS devices. New Google tablets also come with Quickoffice, to say nothing of natural hooks to Google Docs. Office is more fully-featured than any of these competitors, but when you consider the use cases for which most people would choose a tablet, most of these extra tools don't matter. Document compatibility might be a different story, if you want to use your tablet as a BYOD device in, say, an all-Office environment.

But if you want laptop-style productivity, why not just buy a lightweight laptop? Convergence is a convenience, but it's also a compromise. Smaller 2-in-1 models that handle well as tablets generally aren't big enough to be used comfortably as laptops. And larger options with more display real estate and more spacious keyboard accessories are often too big and heavy to be treated as pure tablets.

It's also important to remember that tablets offer their own unique brand of productivity due to their portability, simple interface, and growing library of apps. Students can consolidate their textbooks into a single device and document experiments while in the field, merchants can accept credit card payments anywhere, fitness enthusiasts can track their health, and so on.

Some users might also enjoy slates with stylus support, such as the Galaxy Note series, or various Windows 8.1 models. A tablet might not replace a laptop for many users, but it can still boost productivity, even without a keyboard.

The variety of tablet options can be a bit dizzying, but there's nothing like the cold reality of budget constraints to help you refine your choices. If you're unwilling to spend at least $299, you're already priced out of iPads, for example, and even if that cost sounds agreeable, you'd have to accept the cheapest iPad Mini -- a nice device, but one saddled with a non-Retina screen, a measly 16 GB of storage, no cellular connectivity, and a processor that's beginning to show its age.

Other options might not have the iPad's swagger, but they offer many of the same perks for less money. The base version of Dell's Venue 8, which ships with Android Jelly Bean, starts at $179.99 and is comparably powered, for example. Google's Nexus 7, which boasts a Retina-level display, is only $229. Other, more cheaply-built Android tablets can be had for even lower prices, and if you want a low-cost Windows experience, the Dell Venue 8 Pro offers the full 8.1 package, including desktop apps, on a 1200x800-pixel screen for only $299.99. 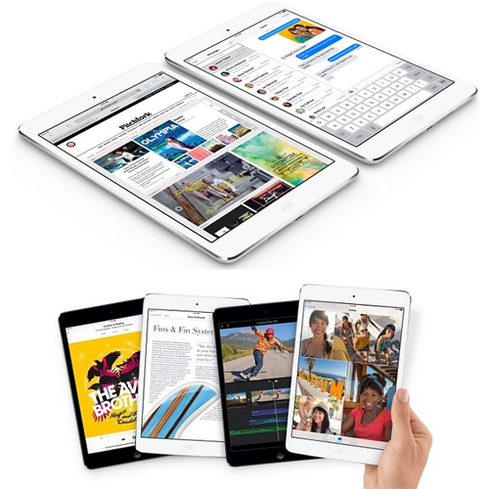 Apple's iPad Mini with Retina Display has won raves from reviewers but carries a steep base price of $399.

It's also important to consider that some devices aren't fully satisfying out-of-box. Many tablet-buyers will face added costs due to accessories, such as a $79 Smart Case for a new iPad Air, or a $129.99 Type Cover 2 for a new Surface 2. If you plan to trade in your device to offset the cost of a future upgrade, you might also pay attention to how various tablets depreciate; generally, more expensive models, particularly iPads, hold value better.

All in all, premium options such as the iPad Air or Surface 2 will be the fastest and best-built, but if buyers are willing to compromise a bit on display density or build quality, cheap-but-appealing options are plentiful and usually offer better deals on storage.

Michael's advice to try these tablets hands-on is good, but I found that difficult to do for the Nexus 7 -- I tried one or two stores and they either weren't set up to web surf or didn't have apps on them that would provide a reasonable approximation of what it's like. iPad and Surface were both much easier to test. (I ended up with an iPad Mini)
Reply  |  Post Message  |  Messages List  |  Start a Board

Roy, your point is well-taken. Apple can live with hype. It can't live without a lot of control.
Reply  |  Post Message  |  Messages List  |  Start a Board

Hate to pick on one small point in what was otherwise a great article, but claiming that Apple rejected NFC because it was operhyped" - give us a break.

They rejected it soley becasue of NIH. Claiming Bluetooth LE is better than NFC is like claiming ships are a valid replacement for trains - sure there's some overlap but they each have strengths in different areas. This is purely a marketing/legal decision on Apple's part to differentiate themselves from the rest of the market - better to rain on NFC's parade and prevent it from being universally adopted than admit Apple missed the boat initially and are willing to come late to the party.

Not that other companies don't do the same thing, but this was purely a self-interest decision on Apples part that they have more to gain from being uncooperative than from joining the pack.
Reply  |  Post Message  |  Messages List  |  Start a Board

Thank You for the great info.There is so much out there to chose from,again a big thank you,zach
Reply  |  Post Message  |  Messages List  |  Start a Board

I am hoping one of the smart people posting can help me. I am a physician and see patients in a rural outreach clinic. I have to carry a small laptop from room to room. I use windows on it and the electronic record uses Citrix. I use the Mac because it was very light and it was challenging hauling a dell room to room. I still have to keep Mac charged and leave the power cord in one room and charge when I rotate back to that room. When I enter the patients history I have to type it in real time, so a keyboard is needed. I might currently have the best solution I can get but I am intrigued by the tablets. What is your advice? Should I give up searching? We rent the office from the hospital two days a week, and federal law regulating leases between providers (hospital and doctors) prevents us from putting in three desktops (the real solution). It's crazy I know. Thanks
Reply  |  Post Message  |  Messages List  |  Start a Board

One of the best-buys for a tablet with the latest features is the 8.9" Pipo M7 Pro on sale for $239 at the site TabletSprint — this new model was released last month, with high end specs that compare to the new Nexus 7, plus an advantage of a larger 8.9-inch screen, making it one of the best values on a tablet this holiday season.

A 3G HSPA+ edition is available for $279 and is one of the first tablets with both Internet & Voice Calling capability and works with AT&T, T-Mobile and Straight Talk Wireless...  a 10-inch edition is also available, the Pipo M9 Pro for $279 ($309 with 3G).

All tablets through TabletSprint feature $25 in premium Apps, including the popular 3D game ShadowGun and an MS Office suite App... along with free monthly 4G Internet access nationwide with 500MB of free data each month, with a 4G adapter included.

Many other deals available through TabletSprint are worth checking out, including the new SmartQ Z-Watch to launch this week, priced at $149 – this new model compares to the popular Pebble Watch, but in contrast to the Pebble's non-touch  monochrome screen, the SmartQ Z-Watch features a full color touch screen display, a more powerful processor, twice the battery power, and features both Bluetooth & WiFi connection.  It also offers an MP3 Player & Voice Recorder, a walking/jogging pedometer,  and works with Android and Apple iOS devices to handle phone calls and sync and display messages, contacts, and schedule.
Reply  |  Post Message  |  Messages List  |  Start a Board

Thanks for the link. Yes, the opposite in every imaginable way. :) I love classy Rolls Roys.

Well, the Apple ecosystem is wonderful. I still don't see such closeness between Android and iOS, though.

Do you think the best Android tablet is close enough to offer everything an iPad Air offers, for example?

@Susan: I think you can safely assume that a Pinto (http://en.wikipedia.org/wiki/Ford_Pinto) is effectively the opposite of a Rolls Royce in every imaginable way ;-)

I think the comparison of Android and iOS is much closer than Mac vs PC, because functionally they are largely the same these days (no, this is not a troll statement, so let's not get into a peeing match), and as mentioned, it's the attached ecosystem that makes the biggest difference to many people. I own Macbooks, iPhones, iPods and an iPad, so for me having all these synced up together is just amazing and incredibly convenient. If I weren't so tied to Apple, I would probably be much more open to the idea of an Android-based tablet (I don't count my Kindle HD, as that's so out of date and hacked around by Amazon it's not really a fair example of Android).
Reply  |  Post Message  |  Messages List  |  Start a Board

I don't think the Surface RT and the samsung note can be compared apple to apple. They are both different. If you need to do everyday PC tasks you will need the surface or a tablet that runs windows. If you don't then you can look at droids or iPads.
Reply  |  Post Message  |  Messages List  |  Start a Board

I find it hard to believe that you say Apple and Android are the same. Next you are going to say that a Mac and a PC are the same? I don't agree with your judgement.

Also, what type of car is a Pinto?