The rambunctious US arm of T-Mobile is looking to get consumers hooked on mini-towers that provide 4G LTE coverage at home or at the office.

T-Mobile, which bills itself as an "un-carrier," announced with its typical bombast the launch of the 4G LTE CellSpot, a mini-tower featuring low power settings for indoor use.

The device is designed to provide an average 3,000 square feet of full-bar LTE coverage throughout a home, small business, or wherever it is needed. The item will be available this week in participating stores nationwide, or shipped through T-Mobile Customer Care.

Customers can get 3G, 4G, or 4G LTE coverage for any 3G or 4G LTE device that works on T-Mobile's network, with no additional purchase required -- it's free of charge with a $25 refundable deposit.

T-Mobile has also focused on user friendliness with the device. Users simply plug in the 4G LTE CellSpot and connect it to their broadband Internet. The device is designed for small spaces, measuring only 8.5-inches wide by 8.5-inches tall and 1.3-inches thick.

However, T-Mobile noted that upon initial set-up, the device will take up to two hours to establish its wireless connection. 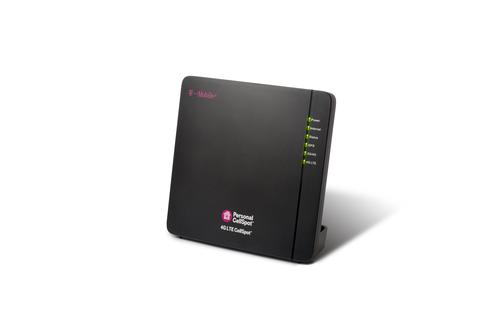 The signal supports band-2 UMTS and band-4 LTE for up to 16 simultaneous calls or data sessions and supports the full T-Mobile network, including advancements like H voice for clearer calls, voice over LTE (VoLTE), and advanced messaging and video calling.

The 4G LTE CellSpot rounds out T-Mobile's Personal CellSpot family, a set of products complementing the company's network and available to Simple Choice customers at no extra charge.

The family also includes the WiFi CellSpot Router, which was announced at Un-carrier 7.0 in September 2014.

The Internet-connected router provides customers with WiFi coverage for calling and texting beyond the reach of any cellular network, while the 4G LTE CellSpot Signal Booster amplifies T-Mobile's 3G, 4G, and/or LTE signal throughout a home or business without an Internet connection.

"Where the T-Mobile WiFi CellSpot's like a T-Mobile tower, this new 4G LTE CellSpot is a T-Mobile mini-tower -- and it's a huge feat of engineering," T-Mobile CEO John Legere wrote in the Nov. 2 announcement. "The big difference between us and the carriers is that they'll do absolutely everything they can to bleed you dry. We'll do absolutely everything we can and use every proven technology available to give you the best coverage possible."

With fewer new subscribers to sign up for wireless service for the first time, carriers have focused on transitioning consumers to smartphones and 4G LTE, and monetizing their data use, with market leaders like Verizon Wireless and AT&T diversifying their revenue streams as challengers like T-Mobile and Sprint gain ground.

[Read more about T-Mobile's plans for the iPhone 6s.]

According to a June report released by Strategy Analytics, T-Mobile US has overtaken Sprint in terms of total subscribers, thereby claiming the No. 3 domestic carrier spot.

The report noted that while growth has slowed, nearly 100 million wireless connections, including consumer electronics connections, but excluding machine to machine (M2M), would be added through 2020, reaching a 128% penetration rate of the US population.

Nathan Eddy is a freelance writer for InformationWeek. He has written for Popular Mechanics, Sales & Marketing Management Magazine, FierceMarkets, and CRN, among others. In 2012 he made his first documentary film, The Absent Column. He currently lives in Berlin. View Full Bio
We welcome your comments on this topic on our social media channels, or [contact us directly] with questions about the site.
Comment  |
Email This  |
Print  |
RSS
More Insights
Webcasts
Unifying Your Endpoint Security Strategy
Monitoring the Invisible - Digital Experiences in a Zero Trust World
More Webcasts
White Papers
Defending Against Critical Threats
The 2021 Security Outcomes Study
More White Papers
Reports
CVE Weaponization Report
The Infoblox Q1 2021 Cyberthreat Intelligence Report
More Reports