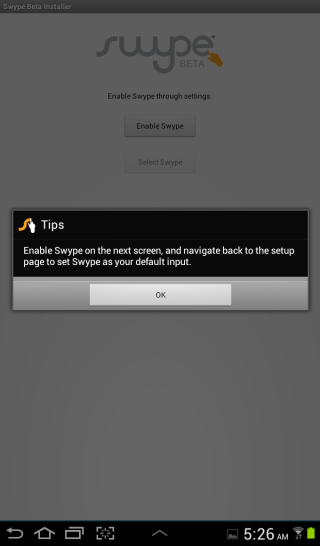 I've always found the soft keyboards on the iPhone, iPad, and Windows Phone 7.5 fairly easy to use. However, I have a hard time using Android soft keyboards on both phones and tablets. I use my trusty Galaxy Tab 2 7.0 tablet every day, and I still have trouble using its Samsung-branded soft keyboard. Swype, the first popular gesture input app for Android, is a replacement soft keyboard that uses a lot of tricks to help make typing easier. The last Swype beta I tried to install on my tablet wouldn't, but this one--version 1.0.3.5809, released on June 20, 2012--did install. As I started this review, I had high hopes that Swype would help me get more use out of my tablet as an input device.

I wasn't disappointed. This release of Swype has convinced me that mobile input--specifically input on an Android tablet--can work well. You might think that on a tablet, with its larger on-screen keyboard, Swype wouldn't be as useful or as desirable as it is. But I found it extremely useful on my tablet for both work and personal tasks.

Swype was bought by Nuance, seller of the popular Dragon speech recognition software app, last year. The latest version of Swype uses its hallmark keyboard finger swipes combined with Dragon speech recognition, plus a new handwriting recognition option, to help you get words down faster. The Swype Beta for Android app is free. To download, create an account by entering your email address and a password. The installation file is downloaded directly from Swype's servers, so you'll need to enable the "Unknown sources" option for allowing installation of "non-Market apps." 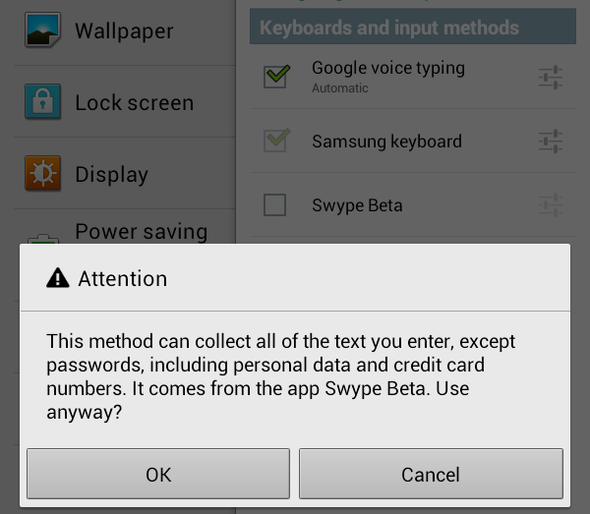 Nuance displays a prominent warning that Swype collects all text for the input methods you allow it to work with. This includes credit card numbers but not passwords. 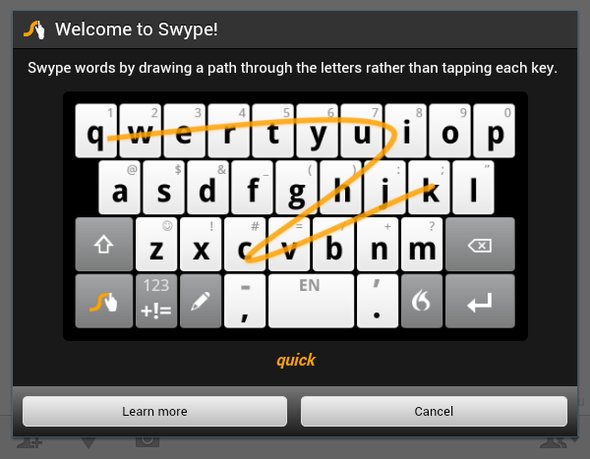 A short intro takes you through Swype's main features, starting with the ability to gesture type. To gesture type, you simply drag a finger across the keyboard from letter to letter. Swype looks for patterns to produce words. It also produces a running type-ahead list of words that you can tap on to insert. Although I ran into issues with earlier versions of Swype, this beta worked very well for me on my Android tablet. I used Swype as my only input method for an entire day including two meetings in which I took notes. Taking notes using Swype was much faster than pecking on Samsung's customized Android soft keyboard. I found it interesting that holding the tablet like a notepad in one hand and gesture typing with the other resembled old-fashioned note taking with a pen and paper notepad. It was, in some sense, more natural than thumb typing or some adaptive multi-finger typing on a tablet. 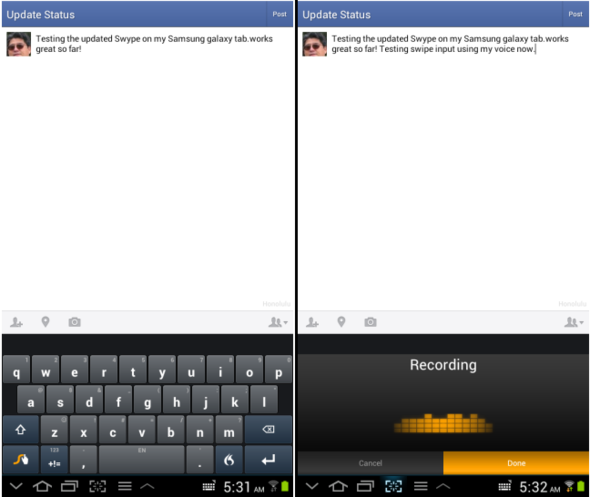 Selecting Swype as the default Android input method replaces the Android--or in my case, Samsung--on-screen keyboard. Here, I used Swype to update my Facebook status. First I used gesture typing. For the second update I used one of Swype's new input options, Dragon speech recognition.

Swype now has Dragon speech recognition integrated into the keyboard. To activate speech recognition, tap the Nuance logo button. Speech recognition requires network connectivity to Nuance's server. Speech recognition worked reasonably well for me. And, for some reason, I found it especially amusing to update Twitter and Facebook by speaking instead of typing. (Of course, I'm not sure this is something I would do in public.) A voice-text dictionary syncing capability adds new words that you enter via the keyboard to a personal dictionary, so Swype will recognize them the next time you say or write them. 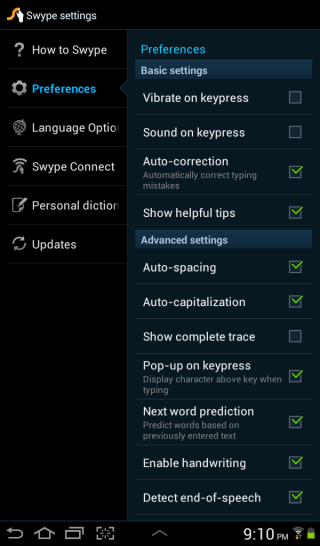 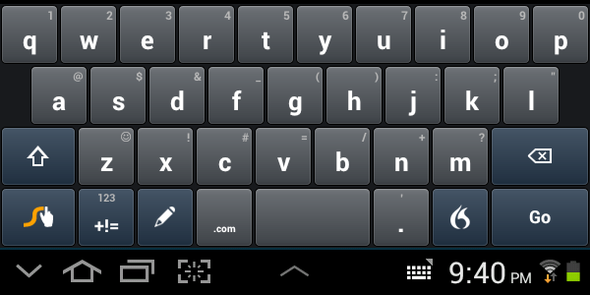 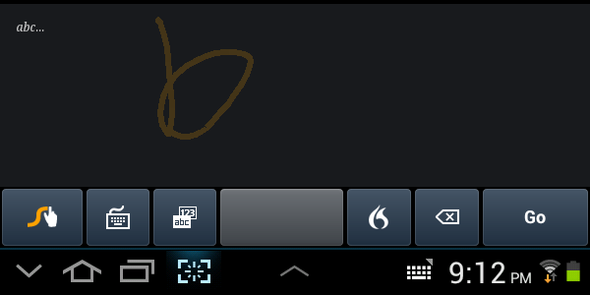 I found handwriting recognition interesting but not as fast as gesture typing. A backspace key lets you erase mistakes. Tapping the keyboard icon returns you to gesture typing mode.

The latest version of Swype is a winner. The new input options, especially speech recognition, make using a soft keyboard on your Android mobile device easier than ever. Here's Swype's company demo video.