Swatch, the famed Swiss watchmaker, said a self-charging smartwatch is on deck for April. Pebble chimed in and said "big things are on deck" for 2015 to counter the Apple Watch.

The Apple Watch will have no shortage of competitors when it arrives in April. Android Wear has a solid lead, but newcomers aim to flavor the smartwatch pie with something other than Apple. Swatch has a device in the works for a spring arrival, and Pebble implied new hardware is on the way.

Swatch Group dropped a bombshell this week. CEO Nick Hayek told Bloomberg the company will launch a Swatch-branded smartwatch within the next three months. Apple's own smartwatch is set to debut in April, potentially putting Apple and Swatch in a head-to-head competition.

The Swatch device will use NFC to communicate with other hardware and will let wearers make mobile payments. Setting the stage a little, Hayek said the smartwatch with work with Android and Windows, but not Apple's iOS platform. The Swatch won't have to be plugged in each night, as Hayek implied it will be self-charging.

No one doubts Swatch's ability to make compelling timepieces. Whether or not it can apply those abilities effectively to create a smartwatch is another story. TechCrunch's John Biggs has serious doubts. "Understand that watch companies don’t know how to market to tech consumers," wrote Biggs. "Swatch and its associated companies offer lifestyle, not tech."

More to the point, Biggs doesn't believe a self-charging smartwatch is realistic. Watchmakers have for years made self-winding watches, he points out, but they have extremely limited run times. They often need to be worn every day so they'll be wound. Can Swatch apply such a concept to generate enough power to run a touch screen? "With a solid enough partnership with a tech company it should be possible, but difficult," concluded Biggs.

There is already concern about the Apple Watch's limited battery life, so this is a legit question to raise. Swatch didn't say anything else about its forthcoming device.

Pebble, which has been quiet these last few months, spoke up earlier this week with news of its own. First, the company says it shipped its millionth Pebble smartwatch. "In our eyes, it's a hallmark of where we've been and where we can go next, with Pebblers by our side," said the company in a blog post. It's hard to put Pebble's milestone into perspective due to the lack of data concerning smartwatch shipments. 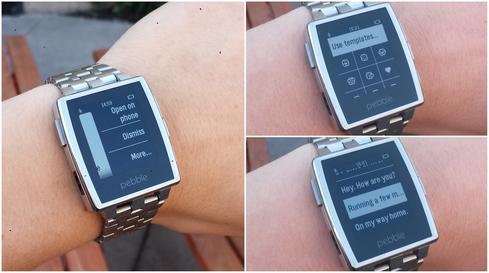 Pebble is looking to take the Apple watch head-on.

[Apple is building a $2 billion data center. What will it look like?]

It's been more than a year since Pebble rolled out a new model. The Pebble Steel arrived in January 2014. Since then, the company has concentrated on improving its operating system and compatibility with third-party applications. Its devices cost about half of what Android Wear smartwatches cost, and they work with Android and iOS.

Of the future, Pebble said, "Rest assured, our small team's got big things on deck for 2015. Some things may change, but our love and support for Pebblers will stay the same." It's hard to say if or when Pebble might launch a new smartwatch, but it doesn't seem like it's going to happen before Apple's smartwatch hits the market.