The Surface 3, the newest hybrid from Microsoft, packs the hallmarks of Surface Pro 3 into a thinner and lighter device. 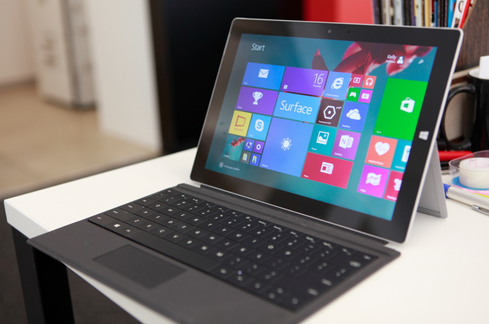 Microsoft is aiming to broaden the scope of its Surface customer base with the arrival of Surface 3, which was announced in March 2015 and will ship in May. The device certainly has potential for universal appeal, with full Windows functionality packaged in a thinner and lighter design.

The Surface 3 was developed as a smaller, more accessible version of its predecessor, the Surface Pro 3, intended for students and mobile professionals who don't need the Pro's extended capabilities. It comes with a thinner screen, a more lightweight structure, and a lower price. Surface 3 will run you $500 to start, about $300 less than the Pro.

If you want to take full advantage of the Surface 3 capabilities, however, you'll have to shell out a bit more. External accessories include the detachable keyboard, or Type Cover, for $130, and the Surface Pen, for $50.

Personally, I don’t understand why the Type Cover has to be separate. I can't imagine using either Surface without a keyboard, and isn't this supposed to be a laptop replacement anyway? But I digress.

[Microsoft Zero-Day Bug Being Exploited In The Wild]

A big chunk of the inspiration for Surface 3 came from customers. "[They said,] 'Give me everything that's in the Pro 3 but make it even thinner, even lighter and even more portable,'" said Microsoft's Brian Eskridge, senior manager for the Surface line, in an interview with InformationWeek earlier this month.

On the surface (zing!), there isn't much difference between the two. The Surface 3 has a 10.8-inch display, which is noticeably smaller than the 12-inch Pro screen but offers a 1920x1280 resolution and a 3:2 aspect ratio. The screen has also been revamped to improve digital pen use, Eskridge explained.

Other hardware features were taken directly from the Pro, including USB 3.0 port, micro-USB 2.0 port, microSD slot, and mini DisplayPort. Its type cover has a shorter key-throw, said Eskridge, and comes in a wider range of colors including red, slate gray, burgundy, purple, and light and dark blue.

Surface 3 is a bit slower than the Pro, with 85% of its performance, which isn't a bad trade. I found it to be pretty speedy. It does offer 10 hours of battery life on video playback, said Eskridge, which is more than the Pro can handle.

Microsoft is killing Windows RT with the Surface 3, which will ship running Windows 8.1 with the promise of Windows 10 upgradability later this summer. The less expensive model has 2GB of RAM for $500, but you can upgrade to 4GB of RAM for a $600 device. An LTE version is expected to launch later this year.

Right now, it's time to take a closer look at the Surface 3, both on its own and next to the older Pro model. After you are done with the InformationWeek review, let us know what you think in the comments section.

@shakeeb, the Surface Pro 3 is much slimmer than the Surface Pro 2 or the Surface Pro.  I think it's right on the border for the "tablet" form factor in my mind.  I use it often as a tablet, especially when traveling.  I pop the kickstand out, put it on my lap and poke away at the touch screen.  I do agree that it's much more capable as a laptop replacement than anything else I've tried.  For me it's right there in a sweet spot for size and functionality.  I can't say that it's perfect but it is a great tool and as I walk around with it I'm getting more people jumping on board with me.  3/4 of my team carries them now and the benefits are leaking out into the rest of the company, instead of laptop requests I'm getting requests for Surfaces now.
Reply  |  Post Message  |  Messages List  |  Start a Board

@LEdwardsAK- yes you could use the existing keyboard via USB port, but having a type cover is great as it could be much portable.
Reply  |  Post Message  |  Messages List  |  Start a Board

@mejiac – That's a great idea to have a docking station with a mouse, keyboard and a monitor attached. This is one way you could use your Surface Pro 3 for business.
Reply  |  Post Message  |  Messages List  |  Start a Board

@mejiac – Over time we should expect these devices to have a lesser battery life the same way our laptops perform. One good way to control this is to charge the battery only once the power is below 10%. Also you should always remove the power adaptor when fully charged. This will extend the cycles of the battery.
Reply  |  Post Message  |  Messages List  |  Start a Board

@Thomas – This is why I love the Ultra Stamina Mode on my Sony Xperia Z2. This restricts high power consuming apps to give a better battery life.  It also restricts the core usage of the processor to save battery. Impressive technology that I would like all portable devices to have.
Reply  |  Post Message  |  Messages List  |  Start a Board

@Thomas – I think the battery life depends on the resources you use on the device. If you are working on a processor consuming heavy task it drains the battery much faster. If you always have Wi-Fi and Bluetooth switched on you will still see a reduction in battery life.
Reply  |  Post Message  |  Messages List  |  Start a Board

@Li Tan – Sometimes I feel technology is not helping children unless we closely monitor and control their activity. Few months back I purchased an Apple I pad for my child to take notes and use it for educational purposes. However recently I figured out that these y use this to play games during while the class teacher is teaching them.

@Kelly22 – Good old days laptops were much bulky and produced quite lot of heat when using them. Though we name it as laptop I don't think we could use it on our lap for more than 30 minutes continuously due to the heat.  I am wondering if Surface pro 3 generates a similar amount of heat, specially the one with high end processors.
Reply  |  Post Message  |  Messages List  |  Start a Board

@Kelly22 – Its good to see Surface Pro 3 using the default micro usb charging method, but do you think ordinary mobile charges could charge the Surface Pro 3. Mobile phone chargers                 provide 5v 800mah to about 2000mah (depending on the mobile device). Is this sufficient to charge surface pro 3?
Reply  |  Post Message  |  Messages List  |  Start a Board