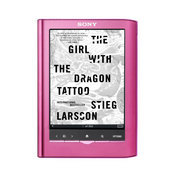 The latest e-readers reflect Sony's intent to compete on hardware quality rather than price. While rivals Amazon.com and Barnes & Noble have lowered prices on their products, which have 6-inch screens and start as low as $139 and $149, respectively, Sony has decided to continue to ask customers to pay a premium.

Sony justifies the higher cost with the more responsive touch-screen in the latest products. The vendor has tossed the old technology, which required a layer of glass on top of the display that slowed performance, and replaced it with infrared sensors that make flipping pages with the swipe of a finger much faster, according to Sony. In addition, Sony decided to take the touch screen across the product line. The previous Pocket Edition did not have the technology.

The other major improvement is in the E Ink digital paper display. Like Amazon.com's latest generation of Kindles, Sony's Readers use E Ink's latest technology, introduced in July. Called Pearl, the screen has a contrast ratio that's about 50% greater than the previous generation, making text easier to read, even in direct sunlight.

Other features across the new line include content zoom, adjustable contrast and brightness control. People have the option of using their own photo as a standby screen saver. Sony had included with the devices two English dictionaries and 10 translation dictionaries in French, German, Spanish, Italian and Dutch. The line include 2GB of onboard memory, while the Touch and Daily editions also include expansion slots for up to 32 GB of additional memory.

The Reader Pocket and Touch editions are scheduled to be available this week in retail stores and online. The Reader Daily Edition is scheduled to ship in November. The latter model is the only one with wireless connections, supporting Wi-Fi and AT&T 3G network for buying and downloading books and other content.