Apple doesn't have a phablet yet, but it may want to scare one up awfully quickly. About half of new phone buyers are looking at devices with oversized displays, according to new data from Accenture. Phablets, which are phones that boast screens stretching between five and seven inches, have surged in popularity. They're not a fly-by-night product category and instead represent the new normal in terms of smartphone design.

Accenture conducted an online survey of 23,000 consumers across 23 countries. Of the 23,000, about 13,000 (57%) indicated they planned to purchase smartphones this year. Of the 13,000, about 6,250 (48%) indicated they'd rather buy phablets than what are now defined as conventional smartphones,  devices with screens measuring between four and five inches. Emerging markets posted the strongest interest in phablets.

One of the original ideas behind the phablet was to offer a smartphone/tablet hybrid that would serve as both devices for those who could only afford one. This idea plays out beautifully in Accenture's data. For example, 67% of those planning to buy smartphones in India want phablets, as do 66% in China, 65% in South Africa, and 61% in Indonesia. Smartphone buyers in developing countries are less likely to have the cash for two devices, so they buy the largest smartphones they can afford. Consumers in developed countries are less likely to prefer phablets. In the US, for example, only 40% of those planning to buy a smartphone this year want phablets.

[But the right size depends on what you want to do with your device. Read Amazon Fire: The Buy Phone.]

"Phablet demand in developed countries is significant, yet even bigger business opportunities are coalescing in emerging markets," says David Sovie, managing director of Accenture's communications, media, and technology group. "Among those, the most lucrative opportunity will likely be in China, because it is one of the world's largest smartphone markets. Consumer technology companies need to broaden their phablet product development and sales initiatives to target larger regional markets keen to buy phablets."

Samsung is already hard at work on its fourth-generation Galaxy Note smartphone, which will debut in early September. Metadata for the device has shown up across the Web, and it was recently benchmarked via AnTuTu, suggesting incredible processor power. Samsung more or less defined the phablet market with the original Galaxy Note in 2010. 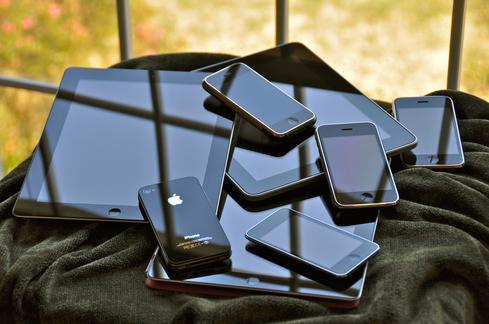 For its part, Apple has shied away from creating larger iPhones. The iPhone had a 3.5-inch screen from 2007 to 2012, when the iPhone 5 finally expanded the display to 4.0 inches. Last year's iPhone 5s carried over the iPhone 5's 4.0-inch screen. The bulk of today's flagship smartphones (the HTC One, the Samsung Galaxy S5, the Nexus 5, and the Nokia Lumia 930) deliver 5-inch screens with full 1080p HD resolution.

Many reports suggest Apple is indeed working on iPhones with larger screens. Apple is widely expected to debut two new iPhones in September, with screens measuring 4.7 and 5.5 inches.

Bigger may not be better for everyone, but it's becoming the case for more and more smartphone and tablet buyers.

A friend of mine just upgraded her phone. I noticed the screen looked bigger than the iPhone's, and she confirmed that it was a Samsung. Of course, this is anecdotal rather thaan statistical, but it does make sense to have a larger screen if you rely on your phone for a lot more than calling and texting.
Reply  |  Post Message  |  Messages List  |  Start a Board

A larger screen is often better for the aging population where more pixels crammed into a small space make usability difficult. Screen size is completely a personal preference.
Reply  |  Post Message  |  Messages List  |  Start a Board

Seems like I may be in the minority here. The larger screens get, the more cumbersome it is to navigate and carry. The 3.5" screen of the iPhone 4/4S to the 4" screen of the iPhone 5 was quite noticible for me -- I wouldn't choose a device with a screen much larger than that.
Reply  |  Post Message  |  Messages List  |  Start a Board

I was surprised how many phablets I saw in the wild at a recent conference. People still tell me they hate the term phablet though. Someone has to come up with a more appetizing name.
Reply  |  Post Message  |  Messages List  |  Start a Board

That might well be the reason that Apple wants to keep its iPhone screens on the smaller side. As it stands now, you buy two devices: an iPhone and an iPad. That better suits their bottom line than if you buy one iPhablet.
Reply  |  Post Message  |  Messages List  |  Start a Board
Editors' Choice
Hot Topics