Ahti Heinla and Janus Friis, cofounders of Skype, have launched a new company, Starship, which aims to reduce the cost of local deliveries of goods by using mostly automated robots. The robots are being tested in the UK. So far, no one has run screaming in abject terror.

In the United Kingdom on Monday, Ahti Heinla and Janus Friis, cofounders of Skype, launched a company called Starship to deliver parcels, groceries, and other goods using a semi-autonomous robot.

Unlike drone-based delivery experiments being conducted by Amazon and Google, the Starship robot travels from store to customer and back on the ground. It's essentially a connected cooler with six wheels. It's similar in purpose, though not appearance, to Savioke's Relay robot, which can traverse a hotel to deliver small items to guests. The salient difference is that Starship's robot travels in public.

"The robot has sensors and cameras to help it navigate its way around the streets," said Heinla, CEO of Starship, in an email. "Much like a human would sense potential collisions and velocity of moving objects, it detects obstacles and halts at any sign of interference."

[Another place where robots are our friends: Amazon Robotics: IoT In The Warehouse.]

Heinla describes the robot as 99% autonomous. As it travels over its carefully mapped range, it is supervised by a human operator who can see through the robot's cameras and can engage passersby in conversation with the help of a microphone and speaker. Through its wireless connection, the robot can be tracked via GPS, so the operator can send assistance or the authorities in the event of mechanical trouble, obstructions, or vandalism. 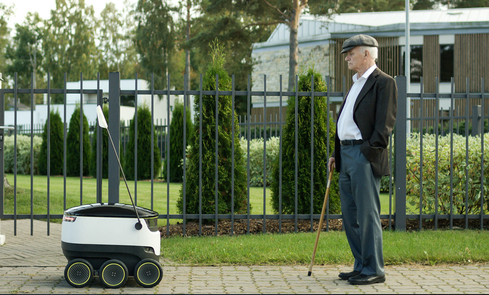 So far, no one has run screaming in abject terror, though those so inclined could probably outrun the object of their fear. The Starship robot, which really deserves a catchy name like "HAuL," travels at the pedestrian-friendly pace of four miles an hour, about the speed of a determined zombie.

The robot, said Heinla, has been tested over 100 kilometers (62 miles) and met about 5,000 people along the way. "On average, 80%-90% of passers-by showed no reaction to the robot whatsoever, while 10%-20% expressed a positive reaction," said Heinla.

Starship aims to deliver goods from local stores in five to thirty minutes, at a cost that's 10 to 15 times lower than current last-mile delivery options. According to a company spokesperson, the target cost for the service is about £1 ($1.50). The company foresees its robot opening up new business models, such as the point-to-point delivery of goods, or a rent-and-return service. But the robot probably won't help the bike courier business.

Starship plans to begin testing its delivery service next year in the UK, the US, and other countries with undisclosed partners. "In the UK, allowing any vehicles on pavements is at the discretion of local councils and as such, we're delighted to have the support of the Royal Borough of Greenwich for a trial of our robot delivery solution in the early part of 2016," said Heinla.

Heinla added that UK regulators have been accommodating to robot testing, noting that Milton Keynes, a town north of London, recently approved the use of LUTZ Pathfinder autonomous vehicles in a trial next year. He said Starship can operate in several other countries, but in many areas, permission must still be obtained from local governments.

Thomas Claburn has been writing about business and technology since 1996, for publications such as New Architect, PC Computing, InformationWeek, Salon, Wired, and Ziff Davis Smart Business. Before that, he worked in film and television, having earned a not particularly useful ... View Full Bio
We welcome your comments on this topic on our social media channels, or [contact us directly] with questions about the site.
Comment  |
Email This  |
Print  |
RSS
More Insights
Webcasts
The Failures of Static DLP and How to Protect Against Tomorrow's Email Breaches
Building the SOC of the Future: Next-Generation Security Operations
More Webcasts
White Papers
5 Steps to Zero Trust in the Data Center
MPLS, SD-WAN and SASE
More White Papers
Reports
Are Unprotected Cloud Databases Leaking Your Data?
2020 State of DevOps Report
More Reports

Although I know what you mean, the other option - quad-copter drones - require a lot more power to get similar payloads off the ground and too their destination. My worry is vandalising, which you have to imagine would be rife in certain parts of particular cities.
Reply  |  Post Message  |  Messages List  |  Start a Board

This seems to be a pretty difficult way to deliver goods. I would imagine variables like weather, uneven surfaces and humans/animals might cause a robot like this so low to the ground to be problematic.

Question is, can these variables really be overcome? Can last mile delivery really be that cheap? I'll be interested in seeing how this all shakes out.
Reply  |  Post Message  |  Messages List  |  Start a Board
Editors' Choice
Hot Topics