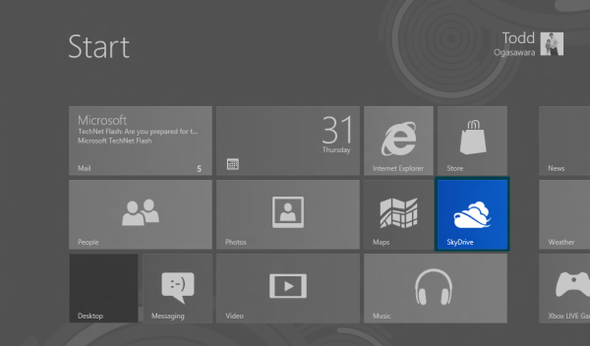 Microsoft released the final preview version (a.k.a the beta release) of Window 8 on May 31. The next version will be released to manufacturers (RTM), which in turn eventually will end up on new PCs. In the meantime, the final preview release includes fully functional versions of Metro-style apps, including one we've been looking forward to taking for a spin: Microsoft's cloud storage service, SkyDrive.

One thing is clear from the latest Windows 8 preview: Metro's swiping gestures still take some getting used to. Whether viral unstructured training will be enough to help millions of people become comfortable with the new interface is unknown. But once you learn Metro, you should find using its apps, including SkyDrive, fairly easy. Just as SkyDrive on conventional Windows blends in with the operating system and becomes a natural part of it, so it is with Metro.

There are two questions about SkyDrive that can't be answered until the final Windows 8 gets here. One is whether integrated SkyDrive cloud access will be allowed inside the firewalls of the corporate world. Another is whether other popular cloud storage services such as Box, Dropbox, and Google Drive (formerly Docs) will be allowed to play in the Windows 8 Metro sandbox.

In our screenshot above, SkyDrive showed up as expected on the main Metro start page of the freshly installed Windows 8 OS on our touchscreen netbook. One tap launches the app.