Galapagos devices will be first sold in Japan as e-book readers, but will add movies, music, games, and additional countries. 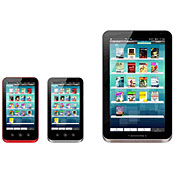 Sharp Galapagos E-Reader Tablet
Sharp is planning to debut two Android tablets designed to be e-book readers. The devices will be available in December for the Japanese market.

The tablets are part of Sharp's new cloud-based media service business, dubbed Galapagos. One of the e-book readers will feature a 5.5-inch LCD screen that will mimic a paperback book with a resolution of 1,024 x 600 pixels, and the other will have a 10.8-inch high-definition LCD screen with a resolution of 1,366 x 800 pixels for reading magazines formatted in two-page spreads.

In tandem with the devices, the first Galapagos service will be an e-bookstore that will provide about 30,000 fee-based publications such as newspapers, magazines, and books. The e-bookstore will also have a fee-based automatic scheduled delivery service feature and will offer free trial versions of recommended content. Next year, Sharp will expand its content offerings to include movies, music, and games.

Both tablets will also have gaming and multimedia capabilities and 802.11 b/g Wi-Fi connectivity. The 5.5-inch device will have a trackball feature that can be rotated like a PC mouse so users can flip pages with one hand. Users can also organize content they download using Sharp's e-book software for PCs, Galapagos Station, and mark and add comments from e-books, the company said.

The devices will also come with a web browser and social networking application. They will use Sharp's XMDF (extensible model data format) e-book standard to allow users to change font sizes without altering the content and picture layout, the company said.

The name Galapagos was chosen to symbolize "the evolution of services and terminal devices," Sharp said, and was taken from the Galapagos Islands, which were visited by naturalist Charles Darwin and inspired him to form his theory of evolution.

Sony recently announced upgrades to its e-readers and is planning to launch an e-book service by the end of the year. Other competitors in the e-book space include Apple's iPad, Amazon's Kindle, and Barnes & Nobles's Nook, which also got an update in August.

Pricing for the Galapagos tablets and services were not given. Sharp said the United States and Europe will get the devices "as soon as possible."