50%
Tweet
The GoFlex Slim holds 350 GBs of storage, is 38% thinner than the previous model, and weighs less than six ounces. 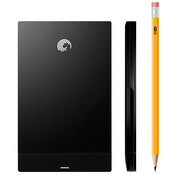 Seagate's GoFlex Slim
Seagate has introduced its slimmest external hard drive, a 320-GB model that's roughly the width of a pencil and works with a Mac or Windows PC.

The GoFlex Slim, launched Tuesday, is 38% thinner than the previous GoFlex ultra-portable drive and weighs less than six ounces. The new product is about 5 inches high and 3 inches wide, making it easy to carry in a pocket or carrying bag. The Slim uses Seagate's 2.5-inch Momentus hard drive for thin notebooks and netbooks.

The Slim's black metal case includes a USB 3.0 port, which is compatible with USB 2.0, but can transfer data 10 times faster when connected to another USB 3.0 port. The internal hard drive is also quick at 7,200 revolutions per minute.

The Slim is formatted as a FAT32 file system, so files can be transferred from either a Mac or Windows PC. The drive comes with backup software and the ability to encrypt files.

The Slim comes with an 18-inch USB 3.0 cable and a three-year warranty. The manufacturer's suggested retail price is $100.

Seagate is marketing the Slim as an accessory for thin notebooks or netbooks, which typically have less internal storage than mainstream mobile PCs or desktop replacements. The Slim is targeted at anyone with a need to carry video files, large graphics, or presentations.

Seagate is offering an HFS+ formatted version of the Slim for people who want to use the external drive with Apple's Time Machine backup software. The drive, which can also store files from a Windows PC, has a metallic finish meant to complement the aluminum casing of a MacBook. The GoFlex Slim for Mac has a MSRP of $99.

Demand for storage is rising, driving an increase in storage capacity of hard disk drives, as well as shipments of HDDs. IDC predicts that HDD shipments for enterprise applications will rise to 52.6 million units in 2014 from 40.5 million in 2009. At the same time, the price per gigabyte is expected to decline at a rate of 25% to 30% per year.

We welcome your comments on this topic on our social media channels, or [contact us directly] with questions about the site.
Comment  |
Email This  |
Print  |
RSS
More Insights
Webcasts
Unlocking the Ultimate Source of Truth in Cloud Security--Network Data
Don't Miss This Crash Course on Cyber Attackers
More Webcasts
White Papers
DevOps for the Database
The Expanding Attack Surface: Don't Forget to Protect Your APIs
More White Papers
Reports
Cloud-Native Security Platforms: The Solution for the Digital Age
Connecting the Dots: Key strategic opportunities in a post-COVID-19 world
More Reports