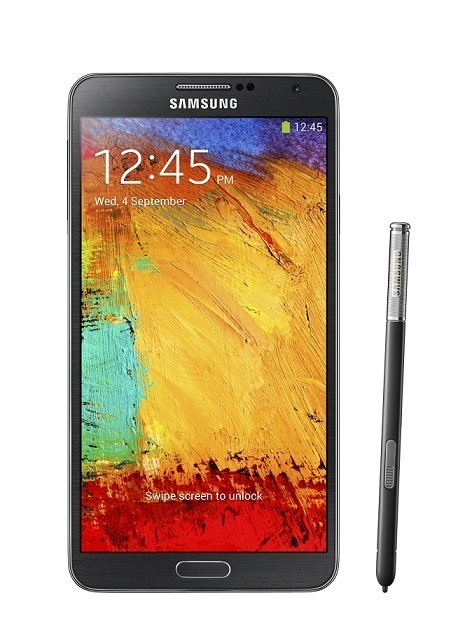 The Note 3, pictured, has a 1920 x 1080 pixel Super AMOLED screen and weighs in at 168 g. The 5.7" screen is longer, not wider, than most smartphones, so the phone can still be held in one hand. While still a bit large for a smartphone, it is thinner, narrower and lighter than the Note 2.

The Note 3 is powered with a 3200-mAh battery and will run on either an LTE 2.3-GHz quad-core processor or a 1.9-GHz Octa Core processor, depending on the market. It has 32 or 64 GB of storage and 3 GB of RAM. Other features include a 13-megapixel rear camera (2 megapixels in front) and 1080p HD video for the front and back cameras. The phone will run on Android 4.3 Jelly Bean.

Software improvements on the Note 3 include a revamped version of the Multi Window tool, which lets you run two programs in separate windows on the same screen. The new drag-and-drop function lets you bring text and images from one window to the other. You can chat with two friends on the same screen, or catch up on the news in one browser as you conduct a Web search in another.

The Note 3 will include Samsung WatchON video discovery software and Samsung Knox security. It also has an improved version of Find My Mobile. Stronger user authentication prevents a stolen phone from being reset to factory settings. You can also track and erase the data on a phone that has been lost or stolen.

Samsung went for a new look with the Note 3 and swapped out the glossy plastic case in favor of a faux-leather back panel with stitching that resembles a notebook or planner cover. The phone still looks like a Galaxy product, but its new casing has a nicer look and feel, compared to hard plastic.

Available colors will include Jet Black, Classic White and Blush Pink. Samsung announced it will offer exchangeable back covers in a variety of other colors at launch.

Check out the rest of the slideshow to get a better look at Samsung's Note 3, smartwatch and tablet and what they can do for you.

"The 10" screen has 2560 x 1600"... I wonder how much benefit users will actually get from all those pixels, at typical viewing distances. Still looks like a nice device. I am far from sold on the smartwatch, however, especially given the price and compatibility limitations.
Reply  |  Post Message  |  Messages List  |  Start a Board
Editors' Choice
Hot Topics