No stranger to innovative products, Samsung launches the SE370 monitor, which can wirelessly charge your smartphone.

In a world-first break through, the SE370 monitor from consumer electronics titan Samsung is able to charge wirelessly all mobile devices that use the Qi wireless charging standard, which was developed by the Wireless Power Consortium (WPC).

The Qi standard, is one of the most readily-available global interface standards, and has been adopted by Asus, HTC, Huawei, LG Electronics, Motorola Mobility, Nokia, Samsung, BlackBerry, and Sony. (Qi is borrowed from the Chinese word meaning natural energy, in case you're curious.)

The technology behind the monitor, which comes in 23-inch and 27-inch models and sports an ultra-narrow bezel and semi-transparent blue finish frame, was meant to reduce the clutter associated with mobile phone charging cables.

The monitor consolidates the multiple charging ports typically found on the front or back of a display, with a circular wireless charging area integrated in the monitor's stand.

Users just place their mobile device on the stand's charging area to initiate automatic charging, which is confirmed by an LED light. 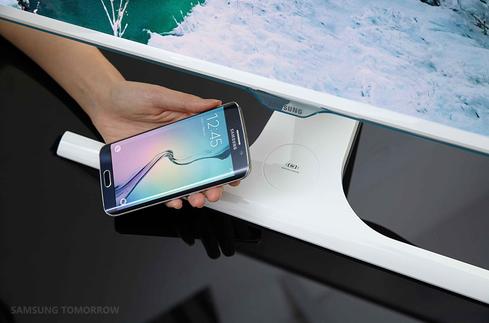 Wireless charging, particularly for mobile devices, has grown in awareness, and it's proliferation into the real world continues to grow. Earlier this month, Powermat Technologies announced the installation of its wireless charging platform at California State University, San Bernardino (CSUSB), allowing students to charge their mobile phones in commonly used areas such as student unions, cafes, and study areas.

"Technology should support, not interfere with, active lifestyles," Seok-gi Kim, senior vice president of Samsung's visual display business, wrote in a July 27 statement. "Our customers increasingly rely on mobile devices to obtain information and interact with others; so by doing away with the clutter on their desks, we are helping them to use their mobile devices in a smarter way."

[Read how WiFi can power sensors and other devices.]

Among the monitor's other features include a Plane-to-Line-Switching (PLS) panel, which allows users to take advantage of a 178-degree viewing angle, and the eye-saver mode, which reduces the harmful effects of blue light on viewers' eyes and associated eye strain by optimizing picture quality to match certain settings.

The company release also noted the SE370 has received the Microsoft Windows 10 certification logo and is fully compatible with the Windows 10 operating system, which is scheduled for release this week on July 29.

In an effort to attract gaming enthusiasts, the SE370 supports AMD FreeSync technology, where the monitor synchronizes the screen refresh rate with the frame rate of a user's AMD graphics card to minimize input latency and to reduce stutter and lag during gaming and video playback.

Rounding out the package is an Eco Saving Plus function that is designed to reduce screen brightness and produce increased energy efficiency. The monitor's front cover, stand, and circuits are constructed without PVC in order to reduce the monitor's environmental impact.

Nathan Eddy is a freelance writer for InformationWeek. He has written for Popular Mechanics, Sales & Marketing Management Magazine, FierceMarkets, and CRN, among others. In 2012 he made his first documentary film, The Absent Column. He currently lives in Berlin. View Full Bio
We welcome your comments on this topic on our social media channels, or [contact us directly] with questions about the site.
Comment  |
Email This  |
Print  |
RSS
More Insights
Webcasts
Building Asset Management into Your Enterprise Security Strategy
Managing a Hybrid Cloud Infrastructure
More Webcasts
White Papers
From MFA to Zero Trust
The Five Major Security Pitfalls of WFH and How to Solve Them
More White Papers
Reports
Are Unprotected Cloud Databases Leaking Your Data?
How Data Breaches Affect the Enterprise (2020)
More Reports