Samsung landed in Las Vegas with guns blazing. The company announced a wide array of new products, including curved television sets, cameras, tablets, and more. With its eyes set firmly on Apple, the company revealed four new Android-based tablets that up the ante to the nth degree.

Falling under the NotePRO and TabPRO brand names, the four tablets include the NotePRO 12.2 and the TabPRO 12.2, 10.1, and 8.4. The only real difference between the two 12.2-inch models is that the NotePRO device offers the S Pen stylus and more enterprise-friendly software. All four tablets feature WQXGA (2560 x 1600) Super clear LCDs with a 16:10 aspect ratio. The displays are impressive, to say the least, and the 8.4-inch model has stunning pixel density. All three surpass the pixel density of the Apple iPad Air and iPad Mini with Retina Display. 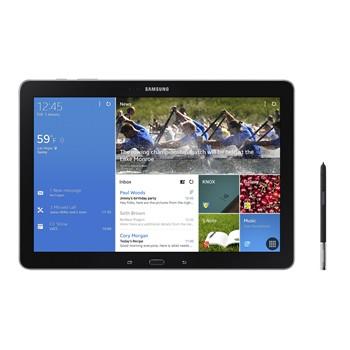 As Apple did with its two tablets, so did Samsung when it comes to tech specs. Each of the four tablets offers a nearly identical set of hardware features; the major difference between them is size. The NotePRO 12.2, TabPRO 12.2, and TabPRO 10.1 all use Samsung's Exynos 5 Octa processor, with four cores at 1.9 GHz and four cores at 1.3 GHz. The TabPRO 8.4 runs a Qualcomm Snapdragon processor, though Samsung said the exact model will vary by market. All include 3 GB of RAM and come with either 32 or 64 GB of internal storage. Each of the four tablets will offer Wi-Fi, GPS, Bluetooth, and LTE connectivity options. They include 8-megapixel main cameras and 2-megapixel user-facing cameras, a variety of sensors, and a standard set of ports.

[Will your next car run Android? Read Google Android Heads For Cars.]

The material and build quality of all four tablets is quite good. Samsung clearly stepped up its efforts to make the new tablets more appealing to users who might be tempted by Apple's aluminum designs.

The tablets will all ship with Android 4.4 KitKat, the most recent version of Google's mobile operating system. Samsung, however, developed a brand-new user interface for the tablets. Rooted in TouchWiz, it includes what the company calls the Magazine UX for interacting with the tablets' home screens. As the name implies, the user interface resembles a magazine and lets users flip pages to jump between home screens and active apps. The magazine pages are fully customizable so users can create an active series of home screens that they can then access by swiping back and forth. It is attractive to look at and easy to use.

The two larger tablets include Samsung's split-screen multi-window feature. This lets users run two apps side-by-side on the screen at the same time. The NotePRO 12.2 is better able to use this feature, however, thanks to the S Pen stylus. Both the NotePRO 12.2 and TabPRO 12.2 come with Cisco's WebEx for screen-sharing during virtual meetings.

The NotePRO 12.2 and TabPRO 12.2, 10.1, and 8.4 will ship globally during the first quarter of the year. Pricing details were not disclosed.

We welcome your comments on this topic on our social media channels, or [contact us directly] with questions about the site.
Comment  |
Email This  |
Print  |
RSS
More Insights
Webcasts
How Elite Analyst Teams are Transforming Security with Cyber Reconnaissance
ROI and Beyond for the Cloud
More Webcasts
White Papers
Passwordless: The Future of Authentication
Cloud Connectivity -- Your Guide to the Network
More White Papers
Reports
The ROI Of SD-WAN: Not Just A Numbers Game
The Future of Multi-Cloud Networking 2020
More Reports

Generally speaking the "professional" model from a device context is one that plays well in corporate environments.  So maybe these Samsung devices allow better integation with Active directory, System Center, and Sync servers.  But I'm betting Samsung just needs a phase to indicate a higher price point.
Reply  |  Post Message  |  Messages List  |  Start a Board

Hyperthreading does not advance work simultaneously.  Hyperthreading is a way to improve performance by reducing context switching.  It allows the OS to schedule work on more cores than actually exist.  If hyperthreading is in play and the OS is scheduling work on four cores, in the past this has meant the processor has two genuine cores and two virtual cores.  For any given clock cycle, only two genuine cores complete work simultaneously.

As always there's no free lunch in that if the OS is not hyperthreading aware, it can actually make incorrect scheduling decisions and reduce peformance.  For instance, if the OS schedules work on two cores (one physical and one virtual) and leaves the others idle, it will have asked one physical core to complete all the work instead of dividing it equally between the two physical cores.  As far as the OS is concerned, it did the right thing by scheduling the work simultaneously.  A hyperthreading aware OS won't make that mistake.
Reply  |  Post Message  |  Messages List  |  Start a Board


One of the first sources the Ramos i12 is available through is-- Tab l et Sp r i nt - which also currently offers a promotion with 4G Internet with 500MB of data every month at no cost (4G adapter included) with free service available in most major metro regions nationwide...
Reply  |  Post Message  |  Messages List  |  Start a Board

That's a good question, Tom. I think security features are another differentiator between consumer and enterprise, but with BYOD that's a fuzzy distinction too.
Reply  |  Post Message  |  Messages List  |  Start a Board

What exactly makes these tablets "professional"? Usually that term means either "like the consumer model, but we charge you more" or "made well enough that you can use it constantly rather than occassionally."
Reply  |  Post Message  |  Messages List  |  Start a Board
Editors' Choice
Hot Topics