Samsung today announced the Galaxy Note 5 and S6 Edge+. The handsets are top-of-the-line in every detail and represent Samsung at its finest. The price points are scary high, however, which may impact sales.

The Note 5 and S6 Edge+ will be sold in the US by AT&T, Sprint, T-Mobile, US Cellular, and Verizon Wireless. The 32GB Note 5 starts at about $700, and the 64GB S6 Edge+ pushes $900. Yeah, ouch. Carriers will offer them through monthly payment plans, but you're looking at hefty payments of $25 to $45 a month, depending on the model you select.

The coup de grâce? Samsung Pay. The Note 5 and S6 Edge+ will be among the first Samsung handsets to support Samsung Pay, which launches in Korean Aug. 20 and in the US Sept. 28. Samsung claims users will be able to pay almost anywhere credit cards are accepted. It has signed up American Express, Discover, MasterCard, and Visa, as well as banks such as Bank of America, Chase, Citi, and USBank.

The Note 5 and S6 Edge+ can be preordered beginning today, and will reach stores August 21.

[ Who's really winning the smartphone game? Read iPhone Vs. Android: Apple's Success Only Goes So Far. ]

If you take the Galaxy S6 and S6 Edge, which Samsung debuted in March, and increase the dimensions a smidge, you get the Note 5 and the S6 Edge+. These new handsets are simply larger versions of what Samsung produced earlier this year, though Samsung was sure to trick them out with several unique features to make them a bit more compelling.

The Note 5 and S6 Edge+ feature 5.7-inch displays with Quad HD (2560 by 1440) resolution. The Note 5 has a flat screen, and the Edge+ has a curved screen. The screens are luscious to behold. The phones are powered by Samsung's Exynos 7420 processor, a 64-bit octa-core monster with four cores at 2.1GHz and four cores at 1.5GHz. They are accompanied by a stunning 4GB of high-speed RAM, and the handsets come with either 32GB or 64GB of storage. (Nope, no 128GB model.) 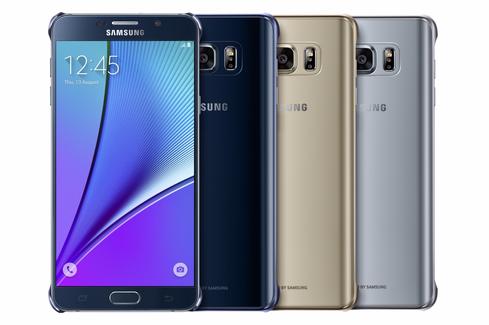 The devices are made by two glass panels (Gorilla Glass 4) glued together by an aluminum frame. The frames are rather thin, but feel strong and give the phones rigidity and a classy look. There's no getting away from the dimensions. Both measure close to three inches wide. That makes them somewhat difficult to use with one hand. They are slightly smaller than last year's model, and are also a wee bit lighter.

Shared features include 16-megapixel main cameras that can record 4K video and broadcast it live to YouTube, as well as 5-megapixel selfie cameras. The phones support most wireless networks, including LTE, Bluetooth 4.1, GPS, WiFi, and NFC. The batteries carry capacities of 3,000mAh, and can be charged lickety-split thanks to QuickCharge technology. They are compatible with both major forms of wireless charging, and can reach a full charge wirelessly in two hours. Samsung didn't make any claims about battery life.

The Note 5 has a revised S Pen Stylus tucked into its bottom edge. It's a trick-click to pop it out. Samsung updated the S Pen software, which now offers the Air Command feature as a constant home screen companion for quicker access.

The S6 Edge+ has software that delivers notifications and content to the side edges of the display. For example, the Edge+ can be set to warn people of incoming messages, calls, and emails, or deliver breaking new alerts.

They each run Android 5.1 Lollipop with Samsung's TouchWiz user interface. New features include Knox enterprise-grade security and SideSync 4.0 for seamlessly connecting to PCs for transferring files.

Samsung gets hardware design. But the fact that it would name its software "TouchWiz" suggests the company doesn't get upscale marketing for a US audience. Don't evoke Cheez Wiz if you're trying to convey a premium experience.
Reply  |  Post Message  |  Messages List  |  Start a Board
InformationWeek Is Getting an Upgrade!