0 comments
Comment Now
Tweet
Apple lawsuits haven't stopped Samsung from forging ahead with new additions to its lineup of Galaxy devices: the Galaxy Tab 8.9, a scaled-down version of the existing Galaxy Tab; and the Galaxy Player 4.0 and 5.0 media devices, which are essentially versions of the Galaxy S phones minus the phone components. The Player devices are powered by Android 2.35 ("Gingerbread"), and the Tab by Android 3.1 ("Honeycomb"). That said, the real buzzword for tablets these days no longer starts with an "A" ( 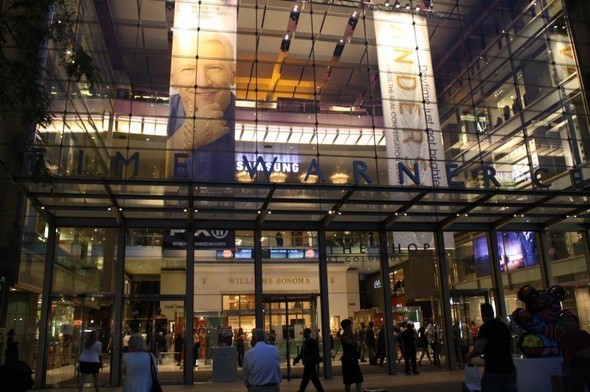 The Samsung press event in New York City was held in a newly-opened showcase in Time Warner Center off Columbus Circle--a space that apparently belonged to a Borders outlet before its demise, surrounded by everything from a Williams-Sonoma store to the Mandarin Oriental Hotel. 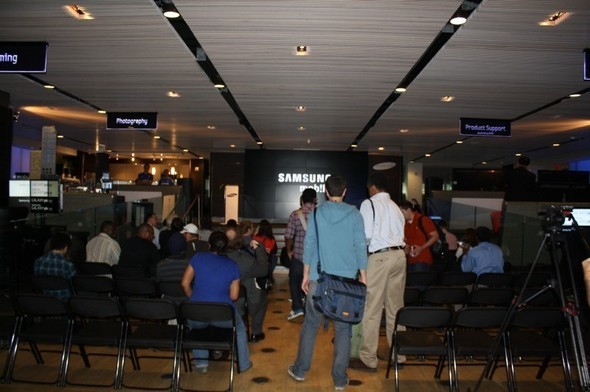 Reporters assemble for the press briefing in Samsung's Time Warner Center showroom, which also exists to showcase other Samsung products such as their consumer appliances. 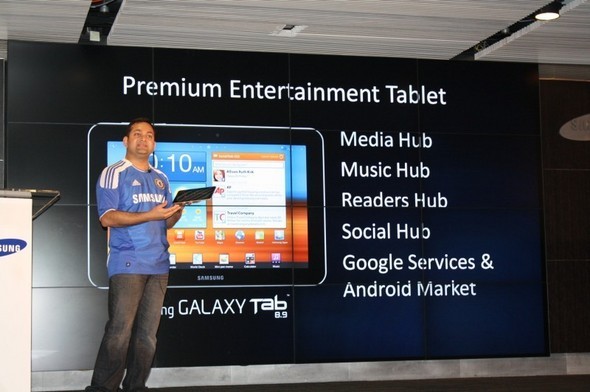 Samsung director of product planning Shoneel Kolhatka provides a quick overview of the new Samsung Galaxy Tab 8.9, a smaller cousin to the Galaxy Tab 10.1 including both consumer-grade multimedia-access features and enterprise-grade connectivity and security functions. 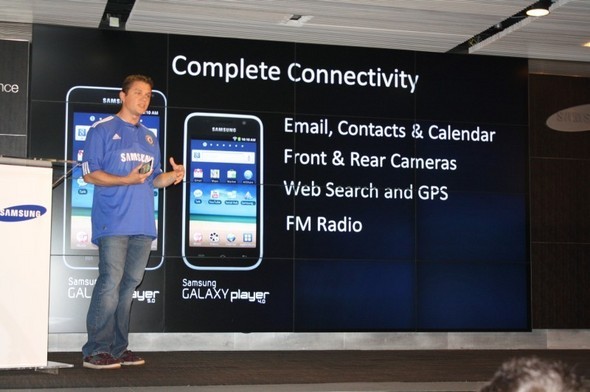 The Galaxy Player, an iPod Touch-like media device, has just about all the features of its older brother the Galaxy S, sans the phone itself. 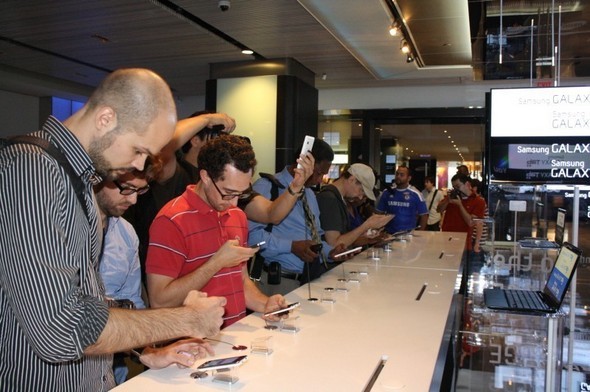 Members of the press get some hands-on time with the Galaxy Player and Galaxy Tab units on display. Some unboxed their newly-received Galaxy Tab loaner units in the store rather than use the demo models. 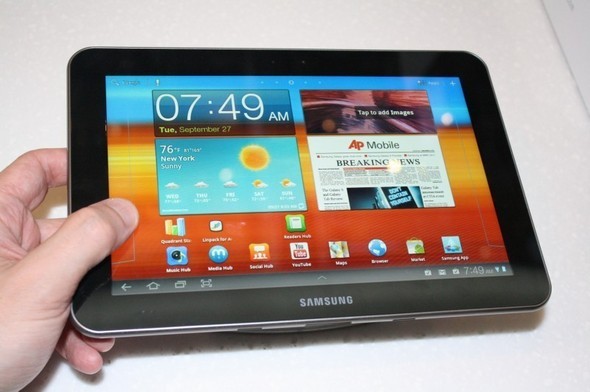 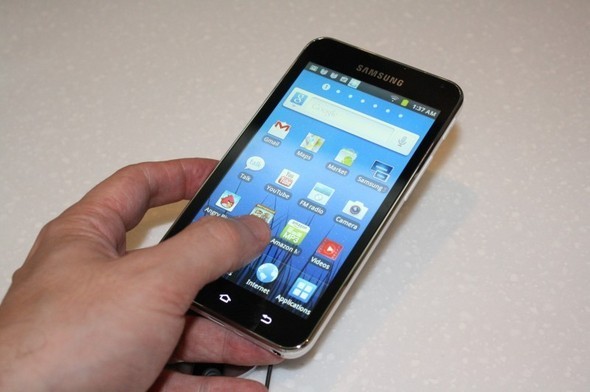 At 4.27 ounces, the Galaxy Player 4.0 is light on the pockets while still supplying an 800-pixel-by-480-pixel display, front- and rear-facing cameras, support for MicroSD cards up to 32GB, and a 1200 mAh battery. 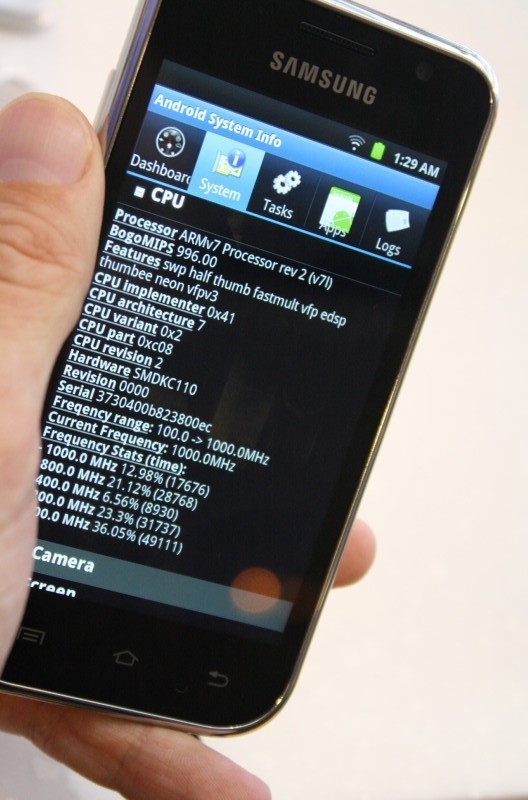 A peek at the Galaxy Player's innards via the Android System Info utility shows it's built on the same hardware as the Samsung Galaxy S phone. The SMDKC110 is another name for the S5PC110 processor, also used in the Galaxy S series. 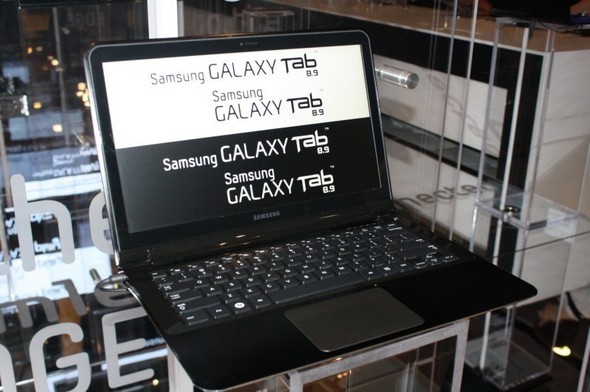 Samsung also has recently started offering its notebook line in the U.S., after years of offering laptops only overseas or in Korea. They also offer Chromebooks as well as the usual Windows-based notebook systems, although neither models were available as interactive demos during the show. 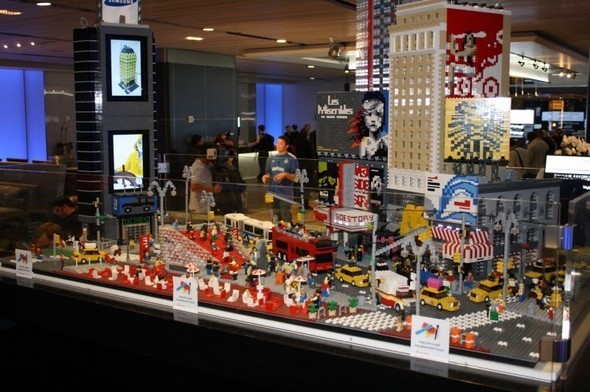 Looks like Samsung turned to the technology experts at LEGO to provide them with the raw material for this recreation of New York's theatrical district, about a dozen blocks downtown from the showroom. This display was off to the side from the main event, but that didn't stop us from getting a closer look.

We welcome your comments on this topic on our social media channels, or [contact us directly] with questions about the site.
Comment  |
Email This  |
Print  |
RSS
More Insights
Webcasts
5 Steps to Integrate SAST into the DevSecOps Pipeline
Linking, Orchestrating, and Managing Your Enterprise Security Systems
More Webcasts
White Papers
NetFlow vs Packet Data
[IT Trend Report] The Future of Cloud
More White Papers
Reports
Can You Spare 10-12 Mins to Help Us Out with a Survey on Tech Trends?
Got 7 Minutes? Dark Reading Needs Your Help With Our Survey on Incident Response
More Reports
Copyright © 2020 UBM Electronics, A UBM company, All rights reserved. Privacy Policy | Terms of Service