With the rumored Galaxy S7 Mini, a compact, feature-rich version of its flagship smartphone, Samsung may be gearing up to challenge Apple's upcoming iPhone SE.

The generally accepted wisdom is that Apple is planning to expand its Mini range of products March 21 with the release of the iPhone SE, a smaller 4-inch smartphone that will have nearly all of the features of the iPhone 6s, except for 3D Touch.

However, Samsung could be planning a spoiler.

The spoiler would come in the form of the S7 Mini, a 4.7-inch version of the flagship Galaxy S7 Samsung recently launched. The more compact handset would feature a 720×1280 resolution display, 3GB RAM, and a 12-megapixel rear camera.

The device would most likely be powered by a Exynos 8890 or Snapdragon 820 processor, which would all be packaged in a body less than 10-mm thick, according to reports in a Taiwanese publication and picked up by the Samsung-centric blog SamMobile. 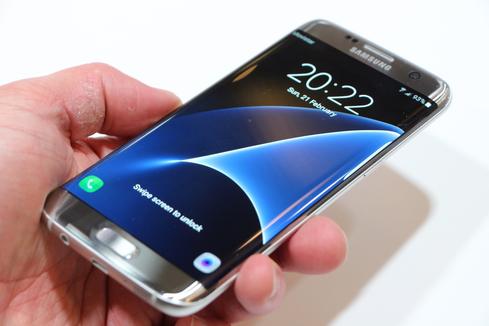 The Galaxy S7 and its larger cousin, the S7 Edge, are waterproof, feature Snapdragon 820 processors with 4GB of RAM, and are equipped with 12-megapixel main cameras.

However, while no official prices have yet been divulged for the rumored S7 Mini or iPhone SE, there is some indication of what Apple may charge. Specifically, the website MacRumors reports the iPhone SE may cost between $400 and $500.

Interestingly, while the two major players in the premium smartphone market are looking to entice consumers with smaller form factors, a recent IDC report indicated one in five handsets shipped during 2015 was a phablet -- a combination of smartphone and tablet -- and that number is going to climb to about one in three handsets by 2020.

The slowdown in mature markets will have dire consequences for makers of high-end hardware, including Apple and Samsung, according to IDC. Average selling prices for handsets was around $295 in 2015, but IDC predicts that will drop to $237 by 2020.

Anthony Scarsella, research manager with IDC's mobile phones team, wrote in a research note that consumers are still migrating upstream with regard to device size, especially as phablets continue to grow in popularity. For example, Apple's iPhone phablet sales will climb from 26% today to 31% in 2020.

Regardless of the size of the device, Apple will need to do more than just repackage its old iPhone 5s in order to boost smartphone sales that appear to be flagging.

While Apple had its most profitable quarter to date during its fiscal first quarter of Q1 2016, iPhone sales, which drove this quarter's success, are predicted to tumble for the first time.

That may be why the Cupertino-based tech giant has been rumored to be looking at advanced technologies, including wireless charging and a move to ditch the standard 3.5-mm headphone jack.

In its place Apple will provide headphones that connect through the iPhone's Lightning charger. This of course means that either headphone manufacturers will have to adapt their products, or consumers will be forced to buy Apple-designed headphones.

Nathan Eddy is a freelance writer for InformationWeek. He has written for Popular Mechanics, Sales & Marketing Management Magazine, FierceMarkets, and CRN, among others. In 2012 he made his first documentary film, The Absent Column. He currently lives in Berlin. View Full Bio
We welcome your comments on this topic on our social media channels, or [contact us directly] with questions about the site.
Comment  |
Email This  |
Print  |
RSS
More Insights
Webcasts
The Failures of Static DLP and How to Protect Against Tomorrow's Email Breaches
Building the SOC of the Future: Next-Generation Security Operations
More Webcasts
White Papers
5 Steps to Zero Trust in the Data Center
Top Threats to Cloud Computing: The Egregious 11
More White Papers
Reports
Building an Effective Cybersecurity Incident Response Team
Email Security Threat Report 2020
More Reports

Bluetooth headphones are already the rage so eliminating the headphone jack is really not an issue if it makes the phone more streamlined and efficient I would support it. If Apple requires proprietary headphones it will only be a matter of time before the after market teams clone them!
Reply  |  Post Message  |  Messages List  |  Start a Board

@jsmitty6436- Speaking of less than helpful, it is also less than helpful to be inpolite to your fellow community members. We pride ourselves on a polite, professional community here. Please contain your comments to talking about the topic and try not to get personal. Thank you.
Reply  |  Post Message  |  Messages List  |  Start a Board

Now you are catching on. The sum total of your comments are less than helpful.

How about you point out how current phones are difficult to manage calls upon.

Addtionally what shape would you suggest for the phones that will be functional and easier to hold?  Perhaps a phone shaped like a suppository?

Your comments overall aren't really helpful. These two are not at all helpful.

again is this a real issue?

Hopw about a sphere?  (now you are just being a whiner)

2) We need new phones with:

What consumers and businesses need are smartphones which:

So do th Hackers


-        Better protection against virus and malware

By an iPhone and use some common sense

Not talking about the iPhone here.  Switch to IOS

they have that today

-        Easier to manage contacts, and selective use of contacts

how much easier do you want it.  iPhone is totally and seamlessly integrated with the Mac and the PC.  Android uses your contacts to send them spam and malware.

again is this a real issue?

Hopw about a sphere?  (now you are just being a whiner)
Reply  |  Post Message  |  Messages List  |  Start a Board

There is no such thing, S7 Mini is a big phone like 50 others on the market. It cannot be used with one hand,

So SE its the only one hand phone on the market, the only small phone which is not crap. Good job, Apple.
Reply  |  Post Message  |  Messages List  |  Start a Board

There seems to be a never-ending race by Apple and Samsung et. al. to produce more and more new phones until every man, woman and child on the planet has had at least 3 at the same time, and upgraded a dozen times. They get richer, so do telcomms. We foot the bill for wanting bright and shiney things which can hold more pictures.

Neither company will gain hegemony in the mobile market. Any model in the last 2 years is fine – all the screens are good and sharp, controls are great, and it all works well.

What consumers and businesses need are smartphones which:

-        Better protection against virus and malware

-        Easier to manage contacts, and selective use of contacts