Samsung pulled an Apple. Rather than impress with brand-new designs, Samsung recycled last year's models with a few added features in the much hyped Galaxy S7.

BARCELONA -- Samsung unpacked the Galaxy S7 and S7 Edge in a spectacular event held Sunday night here at the Mobile World Congress expo that included virtual reality and a surprise appearance by Facebook CEO Mark Zuckerberg. The handsets are the finest ever from Samsung, but don't necessarily go far enough to woo fickle smartphone buyers.

Like their predecessors, the Galaxy S7 and S7 Edge feature aluminum chassis and glass body panels. Samsung took care to refine the designs a little, and smoothed over some of the rough spots of the 2015-era Galaxy S6 and S6 Edge. The new phones have curved glass panels that join tighter to the metal frames.

They are top-of-the-line handsets, as evidenced by the spectacularly high price points.

Unlike most phones in the market, the GS7 and GS7 Edge are waterproof. They have earned an IP68 rating against water ingress, which means they can survive a 30-minute bath in water several feet deep. You can drop them in the pool and not worry. Thankfully, Samsung engineered the phones in such a way that bulky hatches and clunky ports aren't needed. The phones are protected from within, which allows them to keep their pretty exterior designs.

[A case of "you get what you pay for"? Read Smartphone Pricing's up, But Customers Are Happier.]

As expected, Samsung dropped the number of pixels in the camera from 16 megapixels to 12 megapixels. In order to make up for the loss in raw pixel count, Samsung increased the size of the pixels significantly in order to help with low-light imaging. Impressively, the lens practically scoops up light with its f/1.7 aperture. Samsung claims the phone focuses in less than 0.3 seconds.

The GS7 has a 5.1-inch AMOLED screen, and the GS7 Edge has a 5.5-inch AMOLED screen. Both include quad HD resolution. This gives the smaller phone a small advantage as far as pixel density is concerned, but only a small one. Samsung cooked up a feature that allows the screen to remain on at all times -- albeit in black-and-white. It displays the time and incoming notifications so users always have the latest information with just a glance at the screen. The curved display of the GS7 Edge has been improved with more content, more usable apps, and easier control over its behavior. 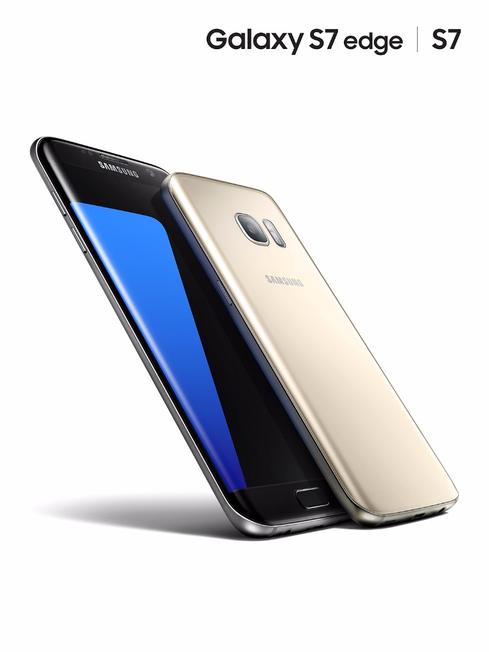 Several segments of the presentation required attendees to wear the Gear VR headset.

Toward the end of the Feb. 21 event, the audience gasped in surprise to find Zuckerberg on stage after taking off a Gear VR headset. Samsung snuck him in without anyone noticing. Zuck talked about Facebook's commitment to VR and rattled off a number of impressive stats. For example, there are more than 20,000 VR videos stored on Facebook and hundreds more uploaded every day. Facebook expects to see a lot more VR in the years ahead.

As if to cement its own commitment to VR, Samsung debuted the Gear 360, a small camera that can capture 360-degree video.

The Galaxy S7 and S7 Edge will go on sale in the US March 11, with preorders kicking off Feb. 23. All the major carriers are selling the phones, including AT&T, Cricket Wireless, Sprint, T-Mobile, US Cellular, and Verizon Wireless. The GS7 costs $670 and the GS7 Edge costs $780.

As impressive as the GS7 and GS7 Edge are, it's worth pointing out that the company did essentially what Apple did with the iPhone 6s and 6s Plus. Samsung took last year's designs and made them that much better.

Despite the new chip set, everything the S7 does can be done with a Note 4 including VR (although the S7 makes all better or easier).  The better components don't result in better innovation.  Like a new car, it would be nice to have but most have plenty of miles still left on their S4s and such.
Reply  |  Post Message  |  Messages List  |  Start a Board

Both the Samsung Galaxy S3 and S4 set the bar.  There are only so many ways to present a rectangular device.  The S5, S6 and now the S7 are really mostly about taking costs out of manufacturing than anything new or innovative.  Like a reliable automobile, I'll have my Note 4 until it dies.
Reply  |  Post Message  |  Messages List  |  Start a Board

Yes, Gary, I agree, there is not too much that can be done in one year to smartphones that have everything users need. I think it's only time for improvements now, for making them better, which is what Samsung and Apple are doing. But, as you know, people will always find something to complain about, which is tiredsome at this point, because it only means they don't have anything constrictive to say about anything. /Susan
Reply  |  Post Message  |  Messages List  |  Start a Board
InformationWeek Is Getting an Upgrade!