Samsung's Galaxy Note II is big for a phone, but small for a tablet. Take a closer look at the interesting features that set it apart. 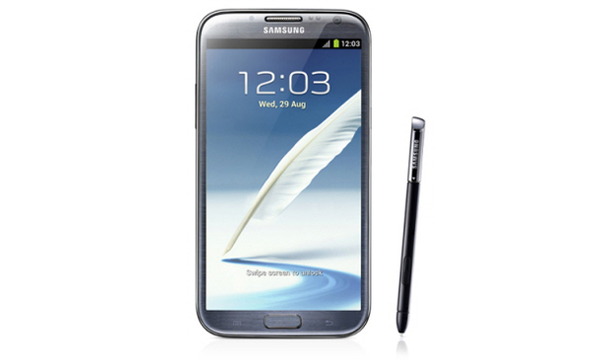 The most noteworthy thing about Samsung's Galaxy Note II is its size. It's huge for a phone. But it's tiny for a tablet. As a device that falls somewhere between these two product categories, it has been called a "phablet," perhaps the ugliest sounding portmanteau since "turducken" entered the vernacular.

"Phablet" is a rather unfortunate term for such an attractive, capable piece of technology. But anyone considering the purchase of the Galaxy Note II should make a point of trying the device out in-person. There's simply no way to grasp how the Note II's form feels, if you haven't used something similar in the past, until you actually grasp it.

For me, it's simply too big. It passes the pants and jacket pocket test, just barely, but as a phone it feels like I'm holding a paperback or shoe-phone out of Get Smart. It just doesn't feel right. But it may be right for you.

I also dislike styluses. Many years ago, I used a Palm Treo 600, which had a stylus, and I didn't have a positive experience with it. If I did a lot of on-device drawing, I might feel differently. But to me, a stylus is just an accessory that's likely to get lost.

Some people apparently love using a stylus. If you're one of those people, the Galaxy Note II deserves careful consideration. The Note II's S-Pen works nicely as a navigational tool, a photo editing tool and a drawing tool, particularly in conjunction with Samsung's S-Note app.

But a stylus requires real commitment. You have to care enough to get used to the conventions for interacting with your device through your stylus. For example, the stylus can send touch events to on-screen areas, but not to the Menu and Back buttons that reside just below the screen, in the phone chrome. Those only respond to finger-based touches.

Other factors: The Note II's 5.5-inch HD Super AMOLED 1,280 by 720 pixel screen is a joy to use for taking pictures with the 8 megapixel camera. You also can do burst shooting via the "Single Shot" camera mode by holding the shutter button down to take images at 6 frames per second, for a maximum of 20 shots. It also allows you to share photos, videos, songs, maps, Web pages, apps and contacts with other NFC-capable Samsung devices using S-Beam. It also ships with Google's Android 4.1.1 (Jelly Bean), a mobile operating system that equals or exceeds Apple's iOS in all but a few areas. Jelly Bean includes new features like Android Beam and Google Now, a push data service.

If the size and the stylus are pluses rather than minuses, Samsung's Galaxy Note II has a lot going for it. Now take a closer look at what else the device has to offer.

Anti-glare screens are significantly dimmer and of course less flashy, literally. We like shiny things. When comparing devices in the store, the one that's shinier gets more attention and more sales. When shopping for a big flat-screen TV, I found myself drawn like a moth to the shiniest displays. I agree, though, glare is a real problem. The brightness factor has also become a sales/marketing feature. A brighter display isn't always better, but the marketing people would like you to think so.
Reply  |  Post Message  |  Messages List  |  Start a Board

What is intuitive for the average smart-phone user and what is intuitive for a noobie user can be surprisingly different. I suspect the Easy Mode would be for the smart-phone noobie and the Basic Mode for an experienced smart-phone user who is new to this particular device. I don't find the terms all that confusing. It could also be that Samsung is considering replacing the Basic Mode with the Easy Mode and is waiting for customer feedback. I agree it's a bit large for a phone, but as a compact tablet it looks quite useful. I've noticed a lot of people have trouble with touch-screen finger accuracy. The problem is all the more frustrating on smaller screens. A stylus or S-Pen would come in handy for many users.
Reply  |  Post Message  |  Messages List  |  Start a Board

Why do all the new mobile devices have these glossy screens? There is always so much glare that it makes seeing the screen very difficult at times.
Reply  |  Post Message  |  Messages List  |  Start a Board
Editors' Choice
Hot Topics