Samsung on Wednesday announced the Galaxy Alpha, a new smartphone that makes use of metal in its design. Samsung is pitching the Alpha as a premium product, but its specs don't quite live up to that billing. Samsung is clearly targeting fans of upscale devices made by the likes of Apple and HTC, though it's hard to say the Alpha brings enough to the table.

Samsung made a big deal about the phone's design, calling it a "new approach." Rather than falling back on Samsung's commonly used all-plastic design, the Alpha sports a metal frame that forms the four outer edges. The frame is beveled and polished, giving it that glinty metallic look favored by some consumers. The front surface is made of glass and the rear surface is formed by plastic similar to the dimple-backed Galaxy S5.

The Alpha is a mid-sized device with a 4.7-inch Super AMOLED screen at 720p HD resolution. Its smaller screen allowed Samsung to shrink the phone to a mere 6.7mm thick, making it one of the thinner devices available. It bears some resemblance to Apple's Galaxy-killer, the iPhone.

[What's the story behind Microsoft's lawsuit against Samsung? Read Microsoft vs. Samsung, Explained.]

"The Galaxy Alpha was built and designed based on the specific desires of the consumer market," said Samsung's mobile chief, JK Shin. (One might rephrase that to, "We got sick of people complaining about our all-plastic phones.") "With an entirely new appearance, the Galaxy Alpha focuses on both beauty and functionality, combining a stunning metal frame and slim, lightweight design with the same powerful hardware and features users expect from a flagship Galaxy mobile device."

The Alpha's 720p HD screen offers far fewer pixels than the full HD screens found on most of today's leading smartphones. The phone is powered by Samsung's eight-core Exynos processor with two banks of four processors (1.8 GHz and 1.3 GHz); the processor is paired with 2 GB of RAM and 32 GB of storage. The phone does not support memory cards. Featuring a 12-megapixel main camera and a 2.1-megapixel secondary camera, the Alpha is able to capture 4K (Ultra HD) resolution video. It has an 1860mAh battery, and while most of Samsung's devices offer removable batteries, it's unclear whether the battery can be removed. 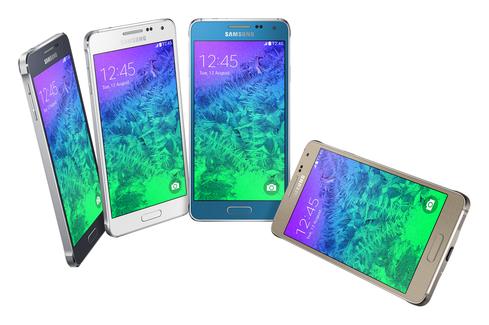 The Alpha offers most of Samsung's proprietary apps and services. For example, the camera includes HDR, Panorama, Shot & More, and Selective Focus. The Alpha can download files faster thanks to Download Booster and it conserves battery power with Ultra Power Savings Mode. Like the Galaxy S5, the Alpha includes a fingerprint scanner, which can be used to activate Private Mode and otherwise secure the device.

Curiously, Samsung announced the Alpha through a press release on its website, forgoing the pomp and circumstance that typically accompanies Samsung device launches. The device's muted introduction practically calls to question Samsung's confidence in the product. The company is expected to debut the Galaxy Note 4 at an event in Berlin scheduled for September 3. It almost feels like Samsung wanted to announce the Alpha and get it out of the way before the debut of its next-generation big-screened phone. The Note 4 is the type of device that drives needed profits for Samsung.

Samsung said the Galaxy Alpha will ship in September, but pricing and exact US availability weren't disclosed.

Eric is a freelance writer for InformationWeek specializing in mobile technologies. View Full Bio
We welcome your comments on this topic on our social media channels, or [contact us directly] with questions about the site.
Comment  |
Email This  |
Print  |
RSS
More Insights
Webcasts
The Failures of Static DLP and How to Protect Against Tomorrow's Email Breaches
Protecting Your Enterprise's Intellectual Property
More Webcasts
White Papers
Two-Factor Evaluation Guide
From MFA to Zero Trust
More White Papers
Reports
2021 Top Enterprise IT Trends
2020 Threat Hunting Report
More Reports

10 IT Trends to Watch for in 2021 Cynthia Harvey, Freelance Journalist, InformationWeek,  12/22/2020
White Papers
Eliminate East-West Traffic Hair-Pinning
5 Steps to Zero Trust in the Data Center
What To Consider Before Renewing Your SD-WAN
Full Body Exposure: CybelAngel Analysis of Medical Data Leaks
From MFA to Zero Trust