50%
Tweet
The Wave, the first smartphone powered by the Bada operating system, topped the 1 million sales threshold in Europe, the company also said. 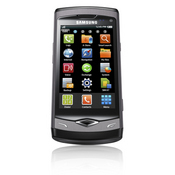 Samsung Wave
Score one for the Bada. On its one-year anniversary, Samsung Electronics announced that the number of Samsung Apps downloads for the operating system passed the 10 million mark in Europe.

The milestone is significant, as the availability of apps is becoming an increasingly important factor weighed by users in their mobile phone buying decisions. Samsung Apps was launched in September 2009 in European and Asian countries, including the United Kingdom, Italy, France, and Germany, and is now available in 34 countries in Europe and 109 markets worldwide.

The decision by the Seoul, Korea-based electronics giant to release its own proprietary smartphone platform last year was seen as a questionable move in an already crowded smartphone market. Bada means "ocean" in Korean.

The top three downloads for Samsung phones are the car racing game Need for Speed Shift; Magic Torch, which transforms a phone into a flashlight; and My Mirror, which lets users view their reflections in a mirror. But Samsung still trails far behind Apple, which announced last January that some three billion applications had been downloaded for its iPhone and iPod Touch devices, and Nokia, whose Ovi Store is doing some two million downloads a day.

The phone maker received other good news this week when its first Bada-powered smartphone, the Wave, topped one million in sales in Europe. The device was launched last February and features a 3.3-inch Super AMOLED touchscreen, a 1GHz processor, a 5-megapixel camera with LED flash, and Wi-Fi and Bluetooth support.

Samsung said more Bada-operated devices are planned to further the popularity of Samsung Apps, which offers game, news, social networking, navigation, music, health, and other mobile apps. A user's specific phone model will automatically display the application catalog for that device, the phone maker said. The Bada platform can also be found on some Samsung TV sets.