Samsung Thursday announced the Galaxy Tab3 Lite, an Android tablet that dips into the entry-level end of the pool. The Tab3 Lite follows several professional-grade tablets Samsung announced at the Consumer Electronics Show, but it aims for the casual user more than the working pro.

The Tab3 Lite features a 7-inch screen with an uninspiring resolution of just 1026 x 600 pixels. Measuring 7.6 x 4.57 x 0.38 inches and weighing in at just 0.68 pounds (310 grams), it is a small and compact device. Samsung has moved the menu bar to the device's bezel rather than the screen itself to make as many pixels as possible available for content. The device is powered by a 1.2 GHz dual-core processor of unknown make. It comes with 1 GB of memory and 8 GB of built-in storage that can be supplemented with a 32 GB microSD card.

The device runs Android 4.2 Jelly Bean with Samsung's TouchWiz user interface. It offers the common core group of Samsung apps, such as Kies, ChatON, Samsung Hub, and Samsung Link. It doesn't include enterprise-friendly security or any productivity apps beyond Polaris Office. The Tab3 Lite includes a 2-megapixel main camera matched to its Smile Shot, Shoot & Share, and Panorama Shot functions for creative imaging. Flipboard is included for users who prefer consuming their social media magazine-style.

Several connectivity options are available. The Tab3 Lite will be sold in two versions: WiFi-only or WiFi and 3G. The 3G is limited to HSPA+ at 21 Mbit/s; LTE 4G is nowhere in sight. The device also includes GPS, GLONASS, Bluetooth 4.0, and an accelerometer. According to Samsung, the 3,600mAh battery is able to provide up to eight hours of video playback.

The Tab3 Lite comes in black or white and will be available worldwide in the weeks ahead. Exact availability and price (probably less than $150) will vary by region. 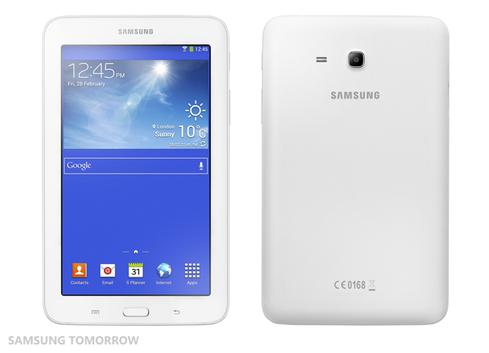 The Tab3 will compete with other entry-level tablets, such as those announced by Acer earlier this month and by HP last month. Devices such as the Asus Nexus 7 and Apple iPad Mini (the one without the Retina Display) trounce the Tab3 Lite in terms of specs.

Mobile professionals will be better off selecting one of Samsung's new NotePRO or TabPRO tablets, which were announced earlier this month. The NotePRO and TabPRO tablets range from 8.4 inches to 12.2 inches and offer class-leading features and performance, such as split-screen multitasking and superior displays.

The popularity of Samsung's Note-branded products is well documented. Late last year Samsung said it had sold 10 million Note 3 devices worldwide. This week, the company indicated it has shipped 10 million Note 3s in its home market of Korea alone.

We welcome your comments on this topic on our social media channels, or [contact us directly] with questions about the site.
Comment  |
Email This  |
Print  |
RSS
More Insights
Webcasts
Building the SOC of the Future: Next-Generation Security Operations
ROI and Beyond for the Cloud
More Webcasts
White Papers
Eliminate East-West Traffic Hair-Pinning
The Insecure State of Microsoft Teams Security
More White Papers
Reports
Are Unprotected Cloud Databases Leaking Your Data?
Email Security Threat Report 2020
More Reports

"Asus Nexus 7 and Apple iPad Mini (the one without the Retina Display) trounce the Tab3 Lite in terms of specs." But what about price? For some people, that's the bottom line (heh). For example, if you want a tab for a child, cost counts more than display res.
Reply  |  Post Message  |  Messages List  |  Start a Board

Samsung's TouchWiz is not a selling point for me. It's like seeing a menu item that includes Cheez Whiz. I'd rather have pure Google Nexus, thank you.
Reply  |  Post Message  |  Messages List  |  Start a Board