50%
Tweet
Samsung has been moving heavily into the US market with TVs, Android tablets and phones, notebooks, and now they are making a major move into Windows 8 computers and hybrid tablet/notebooks. Some use the S-Pen famous from their Galaxy Note Phablet. "The lines between the living room and the boardroom are blurring."

Is touch technology an enterprise feature? Samsung sure seems to think so.

Their existing line of Android-powered tablets and phones is evidence enough, given how those gadgets have sported more and more business-related features like device-level encryption. But even more proof of touch as an enterprise-level feature could be seen in the sneak preview of their forthcoming hardware offerings, held at The New Museum in downtown Manhattan this past Monday.

There was a lot to get one's hands on (pun intended). Anyone who's seen Samsung's Ultrabook and mainstream notebook offerings can tell why they get plenty of attention: their ultra-thin, brushed-metal designs bring to mind the best of the MacBooks, sans Apple's lock-in tax. And Samsung's existing market presence in displays and other consumer electronics has made it that much easier for them to broaden awareness of the Samsung brand in PCs as well.

Many of the featured new offerings -- from the touch-enabled TV-sized displays designed for conference rooms, to the new ATIV line of devices -- are nominally consumer products. But in a conversation with Tod Pike, senior vice president of the enterprise business division for Samsung Electronics America, it became clear that Samsung is not only aware of how "the lines between the living room and the boardroom are blurring" (to use their own phrase), but that they want to capitalize on it.

Samsung's new ATIV Smart PC is a good example of this aesthetic in action. It works as a touch-screen tablet PC and a conventional notebook PC, courtesy of a keyboard which undocks from the screen, and even includes a Samsung S Pen (also featured in the Galaxy Note phablet) for handwriting or on-screen annotations. Those who want a conventional "sit-down" PC have one; those who want a tablet can have one, with no compromises in speed and functionality on either end. 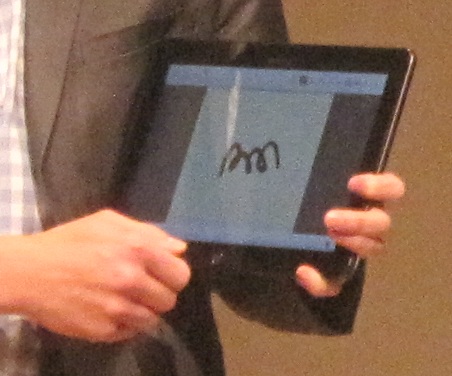 Up until the last couple of years, Samsung had essentially no presence in the American PC market. This makes all the more striking their sudden and ambitious deployment of so many Ultrabook and convertible models, many of which have received high praise. Why enter the U.S. market now, I asked Mr. Pike, especially with the economy as tetchy as it is, and Windows 8 itself something of an unproven quantity?

The short answer: Samsung felt it had many things to offer that market. Among them (according to Pike) were good design work; tight hardware integration (75% of the components in any given device is made by Samsung itself); and a strong sense of product differentiation, not just via things like the new ATIV line but their Series 9 notebook, which preceded the formal introduction of Ultrabooks.

When it came down to how Samsung saw the difference in how to serve the enterprise and consumer markets, Pike had one word: "The channel." Many of the designs of their consumer-level products could be tweaked into enterprise products mostly with the addition of a few key features: a TPM module, more memory, the presence of the enterprise grades of Windows, and so on. "The core design is what's resonating with the customers," said Tod's compatriot, Todd Bouman, vice president of marketing at Samsung Electronics, "whether they're with the consumer realm or enterprise space."

Was Windows 8 an instigator for Samsung to move into these spaces? I asked. "Windows 8 is a catalyst that will help us propel even further into the industry," said Bouman, "but whether Windows 8 was coming or not, our trajectory was still going to skyrocket."

Some of the business adopting Samsung PCs are familiar with Samsung hardware in other realms. Pike cited a major U.S. bank that is adopting Samsung PC hardware, but was already familiar with the brand through their display products for the trading floor. But mobile computing has also enabled Samsung to snag many entirely new customers -- especially in retail, where use is exploding. "We've got lots of great examples of our ability to sell a number of tablets per store in some of these chains that have a thousand outlets," Pike indicated.

And there just as many complete newcomers. Among the entirely new markets for Samsung mobile hardware was a company named MOC1 Solutions, which provides service advisor software to car dealerships. They are now partnering with Samsung as their device provider of choice, to replace a competitor with a much thicker and heavier product.

Was Samsung apprehensive about the potentially shaky uptake for Windows 8? "Everyone has had a certain degree of hesitation to adopt a new version of Windows," Bouman said.

But this is really unlike any previous version of Windows, I countered. It's very different.

"But the trend that we've seen, especially with the younger generation -- what do they want to do?" Here he mimed touching a screen.

Given what I'd seen on the show floor, it wasn't just the younger generation who had that idea.